The Huffington Post UK with Goldsmiths, University of London presents 'The Great Iraq War Debate: Was It Worth It? Iraq, Ten Years On'

Ten years on since the invasion of Iraq, the question still remains as to whether or not the war was worth it. The Huffington Post UK and Goldsmiths, University of London invite you to a debate to mark the anniversary of the biggest demonstration in British history against the Iraq War.

Former cabinet minister Clare Short, Iraqi novelist and activist Haifa Zangana, Independent columnist Owen Jones and HuffPost UK's Mehdi Hasan will be going up against former shadow defence secretary Bernard Jenkin MP, Times columnist David Aaronovitch, founder of Iraqi Prospect Organisation Dr Ali Latif and Shiraz Maher to argue over whether or not the invasion of Iraq was "worth it".

The debate will be introduced by Dr Des Freedman from the Department of Media and Communications at Goldsmiths, and will be chaired by HuffPost UK's Editor-in-Chief, Carla Buzasi.

The event is free to attend, reserve your place here: http://www.amiando.com/iraqdebate

Please print off your confirmation email and bring it to the event for registration. 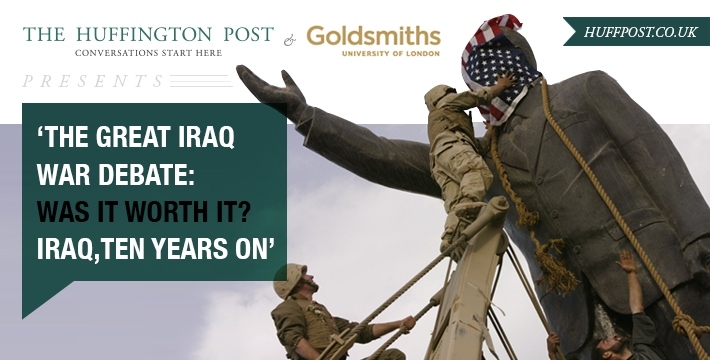