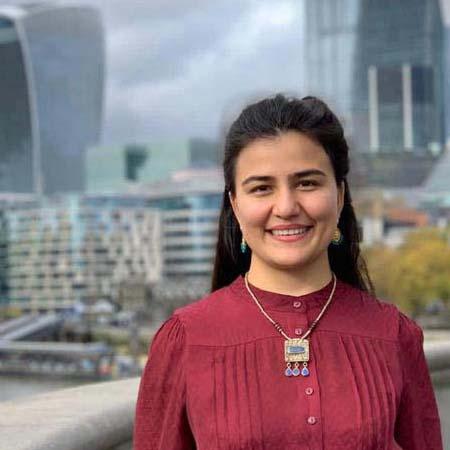 It was at Goldsmiths where she really hit her stride and made plans to build a career through sociology.

Rabia Nasimi is currently working as a social researcher in the civil service, as well as playing a key role in the Afghanistan and Central Asian Association, a London-based charity that supports refugees. She studied Sociology and Politics at Goldsmiths, graduating in 2016. Rabia comes from a refugee background, having arrived in the UK in the back of a refrigerated lorry.

Rabia had studied sociology at college, scoring highly. Following this, she decided to pursue it at a higher level, which led her to Goldsmiths. It was at Goldsmiths where she really hit her stride and made plans to build a career through sociology. At Goldsmiths she learnt the key skills of a social researcher, of how to conduct reliable, relevant, timely and robust research. Enjoying it, she has continued with her passion to pursue a masters and MPhil.

As a direct result of her studies, Rabia now works at the civil service as a social researcher. She studied sociology ultimately to learn how to apply it to make a difference and has now found a place she can. In the four months, she has worked for the civil service, she has really appreciated how much the organisation values its staff and the work they do and feels she has really found her niche. Her route to her current role came directly from the skills and experience she gained at Goldsmiths, an experience that will always remain close to her heart.

University was a great opportunity for her, and she advises anyone coming to Goldsmiths to really take the time to enjoy it. Rabia is a bookworm, so particularly enjoyed the opportunities to study in a relaxed setting. Everyone loves the College Green, and sitting outside the Richard Hoggart building there brings back fond memories.