In 2009 Susie Vickery was given the Christine Risley award. She was selected from the Graduate Showcase at the Knitting and Stitching Show organised by Creative Exhibitions Ltd.   It is the first time that the award has been offered outside of Goldsmiths and in partnership with Creative Exhibitions. 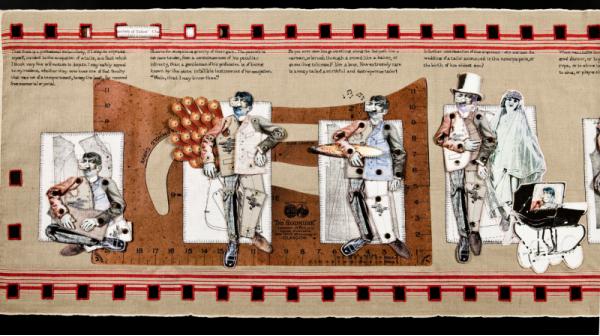 It’s Not the Job, It’s the Cabbage: The Lives of Tailors

I worked for many years as a theatrical tailor, specialising in period menswear. After moving to Nepal I began studying embroidery and this led to a degree in embroidered textiles by distance learning, completed in 2009. I have always used my experiences in different countries as inspiration for my work. While living in Nepal I worked with women’s handicraft groups. I now work with Tibetan artisans in China and with performance artists and small theatre companies in Mumbai.

The work for my final degree show came out of my tailoring background. I wanted to look at the different working practices of tailors in various countries. I interviewed tailors in India, Nepal, Tibet and London, and illustrated the interviews in a graphic book using embroidery and fabric collage. The pages of the book are tailoring chest canvas and the page numbers are tape measures. The last tailor interviewed, Alan Selzer, spoke of the term Cabbage, used to describe the fabric left over after cutting. In my research I came across the essay ‘On the Melancholy of Tailors’ by Charles Lamb. Written in the early 19th Century, it is a satirical essay attributing the melancholy of tailors to the fact that they sit cross-legged and eat too much Cabbage.I illustrated the essay in the form of a long panel, referencing the Bayeux Tapestry (my first project when I began my City & Guilds part 1), and as an animated film.

In the making of the panel I used traditional tailoring materials and techniques. The base fabric was intended to be red-edged linen, a narrow canvas used for internal structure in tailoring. As the high quality linen is no longer available I substituted an old mangle cloth with a decorative red edge. The colour and quality of the cloth matches the original tailoring linen, it also reminds me of my childhood and our mother boiling our clothesin the washhouse copper and then putting them through a mangle. She made all my clothes and I have used a copy of her dressmaker’s curve as a background.

The panel is made like a strip of old film with added layers of technology. The film sprocket holes are hand-stitched buttonholes, and then the ‘film’ is digitally animated. The text is a hand-stitched computer font which replicates the font of an old typewriter. There are two extra sprocket holes at the beginning of the panel to bring the total number up to 108. I sewed the buttonholes at night while working in Tibet and wanted them to add up to this auspicious Buddhist number. Each frame of the film is formed by an old tailoring draft and the puppets are a collage of old images with buttonholed edges and button joints. 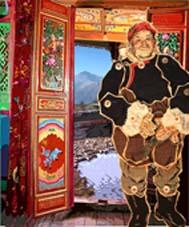 We read about others in books, see films charting their lives and look at photographs of them.  But how to give more texture to what they have to say? Susie Vickery’s latest body of work looks at people of the cloth, those who work with fabric every day.  She literally adds texture to their images with fabric appliqué and embroidery.  Susie has photographed and interviewed tailors, garment factory workers, fabric salesmen and ironing wallahs in India, China and the United Kingdom.  Glimpses into their lives were then recorded using the materials and techniques of their work, including khadi, the hand-woven fabric of India, and Tibetan brocade.

Susie’s previous work ‘On the Melancholy of Tailors: An essay by Charles Lamb’ won the 2009 Christine Risley Award, which consisted of £500 plus two exhibitions. Doing the Needful is the second of these exhibitions.