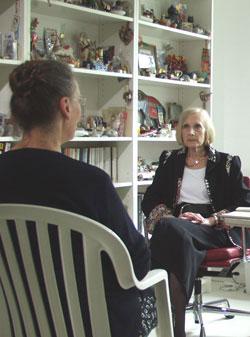 For the past five years we have been working with Matthew Partington, from the National Electronic and Video Archive of the Crafts (NEVAC) based at the University of West of England to produce a series of high quality oral history interviews with eight leading British artists.

Audrey Walker took over from Constance as head of textiles at Goldsmiths in 1975 before retiring in 1988. During this period she opened up the textiles programmes from primary stitch based to an interdisciplinary approach across a range of textile practices and histories. Eirian Short, who had previously worked with Constance, was a key member of Audrey's staff at the time. Christine Risley was encouraged to learn machine embroidery by Constance and introduced this to the course in 1948.

Other artists interviewed include, Alison Liley, founder member of of the “62 Group” of artists and Polly Binns, who with Janis Jefferies, co-founded the “Fibre Art Group” in 1979. The set is completed by interviews with Caroline Broadhead, Rozanne Hawksley and Margaret Hall-Townley. Rozanne taught at Goldsmiths in the late 1970’s and 80’s. Her work is often centred around the theme of death and she has had several important National and International exhibitions, including the Lodz Triennial in 1995. 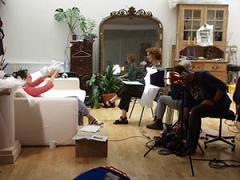 The interviews are available to purchase as a boxed set of DVDs. 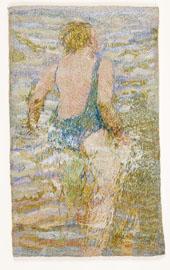 In 2008 an Award was given to the Constance Howard Centre by LCACE (London Centre for Arts and Cultural Enterprise) to trace, photograph and produce an additional CD of images of as many artworks by the eight artists featured in Narrative Threads as possible.  Many of the images have never been seen before and some of the artworks themselves may never be seen in public again, some no longer exist.

The resulting CD, now complete, is available with the set of DVDs of Oral History, or as an individual item.  It is a 'MUST' for research into contemporary textile history.  It is beautifully produced, easy to use and contains many images not available anywhere else.

The complete set of Narrative Threads DVDs with the new CD included free of charge costs £100 plus VAT for organisations and £50 plus VAT for individuals, plus post & packing @ £5.50

The new CD can be purchased separately and costs £15 plus VAT and post and packing @ £2.50