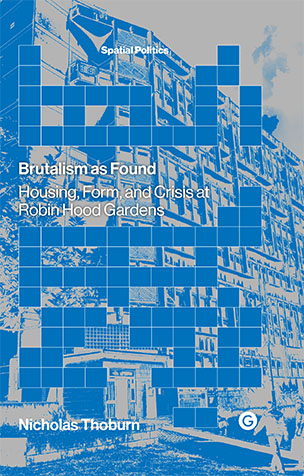 A study of the Robin Hood Gardens housing estate in east London, this book critically appropriates Brutalism under the crisis conditions of today. Immersed in the materials, atmospheres, social forms, and afterlives of this extraordinary estate, here Brutalism is wrested from today's privatizing tastes for “raw concrete” and nostalgia for the post-war class settlement.

The only mass-housing scheme by New Brutalist pioneers Alison and Peter Smithson, Robin Hood Gardens has been the object of much dispute. But the clichéd terms of discussion—is it a “concrete monstrosity” or a “modernist masterpiece”?—have marginalized the estate's residents and masked the role of the housing crisis and revanchist urbanism in its demolition. Breaking with these narratives, Brutalism as Found centers the estate's lived experience by a multiethnic working class, not to displace the architecture's experimental qualities of matter and form, but to radicalize them for our present.

Grasping the estate's architecture in its originality and complexity, the book enlists the Smithsons' methodology of the “as found.” Here architecture cleaves to the world as it is, its flux and crises brought to light as integral to architectural expression. The result at Robin Hood Gardens is a topological architecture of interlaced and divergent forms, forms that deform themselves and their site and society too. Interleaving architectural analysis, social critique, lived testimony, portrait photography, and critical theory, this ground-breaking book reconstructs Robin Hood Gardens as a socio-architectural expression of our time out of joint.

Nicholas Thoburn is Reader in Sociology at the University of Manchester. He has published widely on cultural theory, political publishing, social movements, and architecture. His previous books include Deleuze, Marx and Politics and Anti-Book: On the Art and Politics of Radical Publishing.