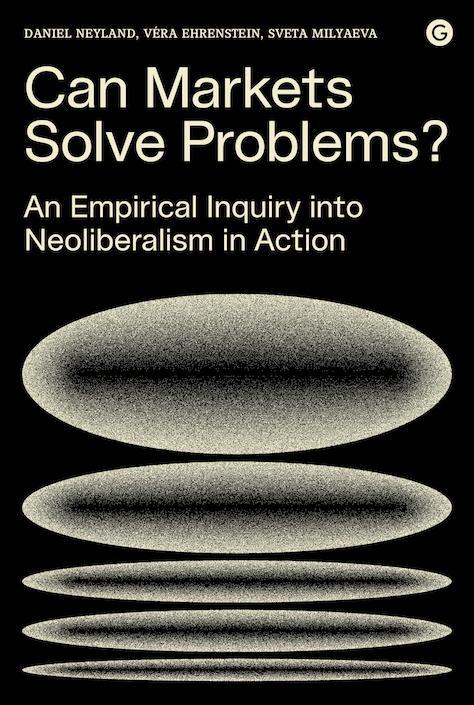 Market-based interventions have been used in attempts to solve numerous public problems, from education to healthcare and from climate change to privacy. Scholars have responded persuasively through critiques of neoliberalism. In Can Markets Solve Problems? Daniel Neyland, Véra Ehrenstein, and Sveta Milyaeva propose a different route forward.

There is no single entity knowable as “the market,” the authors argue. Instead, they examine in detail the devices, relations, and practices that underpin these market-based interventions. Drawing on recent work in science and technology studies (STS), each chapter focuses on a different intervention and critically explores the market sensibility around which it is organized. Trade and exchange, competition, property and ownership, and investment and return all become the focus of a thorough exploration of what it means to intervene in public problems, how problems are composed, and how solutions are continually reworked.

Can Markets Solve Problems? offers the first book-length STS enquiry into markets and public problems. Weaving together rich empirical descriptions and conceptual discussions, the book provides in-depth insights into the workings of these markets, their continuous evolution, and the consequences. The result is a new avenue of critical inquiry that moves between the details of specific policies and the always-emerging, collective features of this landscape of intervention.

Competition and markets are often thought of as attractive solutions to public problems. The authors range over cases as diverse as carbon emissions, vaccines and student loans. Refusing easy answers, they provide a vital conceptual toolkit for approaching the issues involved.

Falling back on economic solutions when dealing with political problems is certainly not unproblematic. Neyland, Ehrenstein and Milyaeva provide us with a most sagacious foray into this preoccupation. They develop an approach that proves decisive for the interpretation of the shifts and quandaries such processes entail in practice.

How can researchers be better equipped to understand the proliferation of market-based interventions in governance – including the governance of the academic production of knowledge itself? This careful and measured book provides a useful overview of recent developments in market studies as well as a roadmap for navigating market solutionism in the imagination and management of public problems. Essential and even-handed, this is an important guide.

Bill Maurer, Professor of Anthropology and Law at the University of California, Irvine, and editor of A Cultural History of Money

What could the careful empirical study of "market devices" possibly contribute in the age of seemingly victorious Wild West capitalism and generalised precarity? The authors show the way in this timely, carefully argued and lucid book: now that the state's mission to advance the market is widely understood as a contradictory process, we must affirm the ‘ambivalence’ of the market: in areas as diverse as climate governance, the data economy and social work, marketisation has widely divergent effects, and only if we grasp the specifics can we assess its effects, and rediscover the meaning of public problems today.

Noortje Marres, Director of the Centre for Interdisciplinary Methodologies, University of Warwick

Daniel Neyland is Professor of Sociology at Goldsmiths, University of London

Sveta Milyaeva is Lecturer in Sociology at Bristol University