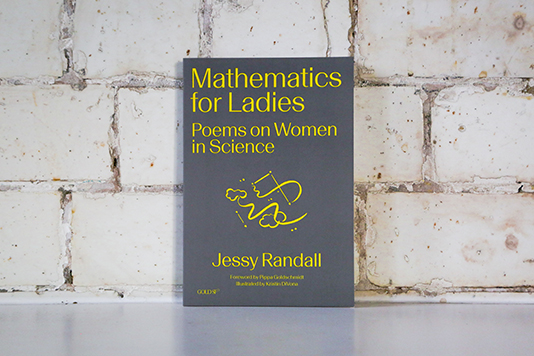 Hilarious, heart-breaking, and perfectly pitched, these carefully researched poems about historical women in science, technology, engineering, mathematics, and medicine will bring you to both laughter and outrage in just a few lines. A wickedly funny, feminist take on the lives and work of women who resisted their parents, their governments, the rules and conventions of their times, and sometimes situations as insidious as a lack of a women's bathroom in a college science building.

Discover seashells by the seashore alongside Mary Anning and learn how Elizabeth Blackwell lost her eye. Read about Bertha Pallan's side hustle in the circus, Honor Fell bringing a ferret to her sister's wedding, Annie Jump Cannon cataloguing stars, Mary G. Ross stumping the panel on “What's My Line?,” Alice Ball's cure for leprosy, and Roberta Eike stowing away on a research vessel. Some of these poems celebrate women who triumphed spectacularly. Others remember women who barely survived.

Explore the stories of women you may have heard of (Marie Curie, Jane Goodall, Émilie du Châtelet) alongside those of others you may not (Virginia Apgar, Maryam Mirzakhani, Ynes Mexia, Susan La Flesche Picotte, Chien-Shiung Wu). If you have come across Randall's poems in Scientific American, Analog, or Asimov's, you will have already opened the door to these tales, all the more extraordinary because they are true.

Illustrated with Kristin DiVona's portraits for NASA's “Reaching Across the Stars” project, this is a book to share with scientists, feminists, and poets, young and old and of any gender.

The only good science fiction poems ever written are by Jessy Randall.

Annalee Newitz, author of The Future of Another Timeline and Autonomous

I never get tired of learning about women who achieved great things despite obstacles. There are so many of them—and so many of them did not get their due.

Jessy Randall is the author of the poetry collections How to Tell If You Are Human (2018), Suicide Hotline Hold Music (2016), There Was an Old Woman (2015), Injecting Dreams into Cows (2012), and A Day in Boyland (2007), a finalist for the Colorado Book Award. Her poems and stories have appeared in Poetry, McSweeney's, Nature, and Scientific American.

Pippa Goldschmidt is a writer based in Edinburgh (UK) and (more recently) Frankfurt, Germany. Much of her writing explores the hidden lives of scientists and their work. She is co-editor of I Am Because You Are, a specially commissioned anthology of fiction celebrating general relativity, and Uncanny Bodies, an anthology of fiction, poetry and academic writing inspired by the uncanny. Her short stories, poetry and non-fiction have been published in a variety of magazines and anthologies, most recently in Mslexia, Litro, Scottish Review of Books, New Writing Scotland, and the New York Times, and broadcast on Radio 4.