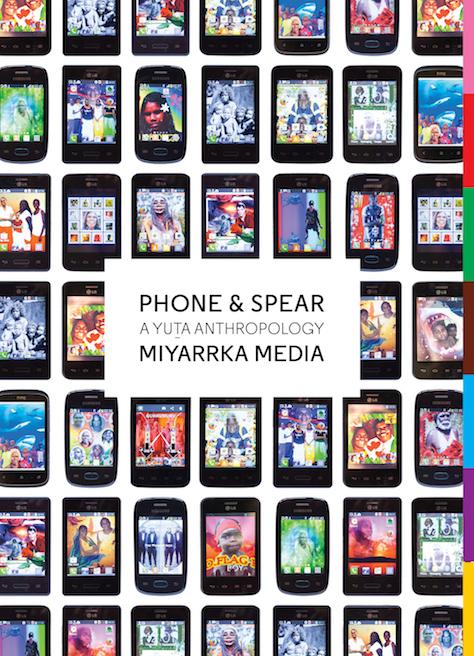 Yuta is the Yolngu word for new. Phone & Spear: A Yuta Anthropology is a project inspired by the gloriously cheeky and deeply meaningful audiovisual media made with and circulated by mobile phones by an extended Aboriginal family in northern Australia. Building on a ten-year collaboration by the community-based arts collective Miyarrka Media, the project is an experiment in the anthropology of co-creation. It is a multivoiced portrait of an Indigenous society using mobile phones inventively to affirm connections to kin and country amid the difficult and often devastating circumstances of contemporary remote Aboriginal life.

But this is not simply a book about Aboriginal art, mobile phones, and social renewal. If old anthropology understood its task as revealing one world to another, yuta anthropology is concerned with bringing different worlds into relationship. Following Yolngu social aesthetics—or what Miyarrka Media translate as “the law of feeling”—the book is a relational technology in its own right: an object that combines colour, pattern, and story to bring once distant worlds into new sensuously mediated connections.

Phone & Spear is a uniquely powerful work of anthropology in and through art practice. Few works expand the depth and breadth of collaboration to produce such revelation and pleasure. Fewer still are as affecting, poignant, and downright enjoyable. Bravo!

A beautifully conceived voyage into the mediascape of liquid photography. The authors’ profoundly collaborative method lays the basis for numerous insights into media practices that appear both new and old. Boldly grasping ‘remediation’ and ‘remix’ as both subject and method, this beautifully designed book embraces radical juxtapositions and offers a persuasive demonstration of what a re-imagined anthropology can contribute to media studies and debates around globalisation, image-flows, and ‘technologically-mediated artfulness’.

This is a remarkable book. Phone and Spear is destined to become a classic of its time. The images are mesmerising, supercharged with colour and creative spark. The interplay between image and text on the page is absorbing and often moving. The writing throughout is fresh, lively, extending the vitality of the visual material. The sense of an intercultural family of voices brings a dynamism and richness that is often missing in scholarly texts

A profoundly original project, an experiment in collaborative writing and cross-cultural insights based on the longstanding work of this group on a number of exciting projects involving cut-and-paste/remix phone-made media as well as films about Yolngu use of mobile phones, particularly revolving around the truly brilliant short film that they made on this topic, Ringtone.  I think this is a fantastic contribution to an anthropology that is constantly pushing for both experimental forms and collaborative work, but so rarely really delivering on those ideas. Having the rich layering of phone-made images throughout, with a range of explanations about them, gives Phone & Spear its vitality.

Collectively authored by seven members of the Northern Australian-based Miyarrka Media, Phone & Spear is one of the most creative and unique anthropological texts to be published in recent memory. Proposing a Yuta, or “new,” anthropology from Yolngu perspectives, the full color photo quality pages interweave a discursive collage of images, artwork, commentary, dialogue, and analysis that is simultaneously ahead of its time and long overdue.

Phone & Spear does not make an argument but performs it. Its form is perhaps the most inventive of any ethnography I've read.

Miyarrka Media is an Indigenous arts collective in northern Australia, led by Dhalwangu elder Paul Gurrumuruwuy and visual anthropologist Jennifer Deger, who has collaborated on Yolngu media projects for more than twenty-five years. Their work has been screened and exhibited in the United States, Europe, Australia, and Taiwan. Recent projects include the films Ringtone and Manapanmirr, in Christmas Spirit and the exhibitions Christmas Birrimbirr, Gapuwiyak Calling, and Warwuyu (Worry).