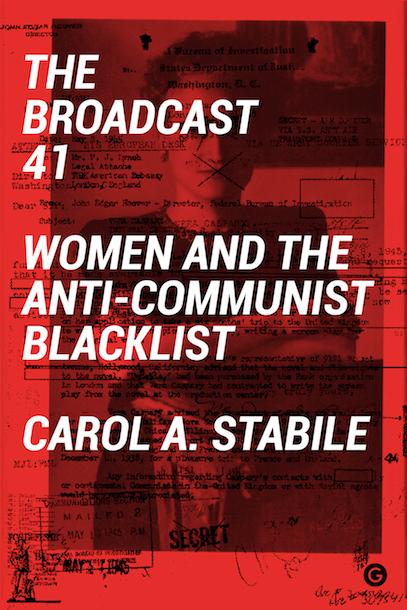 At the dawn of the Cold War era, forty-one women working in American radio and television were placed on a media blacklist and forced from their industry. The ostensible reason: so-called Communist influence. But in truth these women — among them Dorothy Parker, Lena Horne, and Gypsy Rose Lee — were, by nature of their diversity and ambition, a threat to the traditional portrayal of the American family on the airwaves. This book from Goldsmiths Press describes what American radio and television lost when these women were blacklisted, documenting their aspirations and achievements.

Through original archival research and access to FBI blacklist documents, The Broadcast 41 details the blacklisted women’s attempts in the 1930s and 1940s to depict America as diverse, complicated, and inclusive. The book tells a story about what happens when non-male, non-white perspectives are excluded from media industries, and it imagines what the new medium of television might have looked like had dissenting viewpoints not been eliminated at such a formative moment. The all-white, male-dominated Leave it to Beaver America about which conservative politicians wax nostalgic existed largely because of the forcible silencing of these forty-one women and others like them. For anyone concerned with the ways in which our cultural narrative is constructed, this book offers an urgent reminder of the myths we perpetuate when a select few dominate the airwaves.

Carol Stabile provides us with a cautionary tale of a group of women previously erased from the history of broadcasting. This brilliantly researched history gives us the story of the Broadcast 41 and their enemies, the tale of a feminist cohort whose contributions to television and persecution by anti-communists now emerges as a significant part of the story of a shameful era in American cultural history.

Trenchant and timely, The Broadcast 41 explores the birth of American television in the context of Cold War anti-communism. Carol Stabile traces two competing stories, the first centered on anti-communists who orchestrated the media blacklist, the second documenting the women influencing media production in New York City in the 1930s and 1940s. Stabile considers what television might have been, given the work, resilience, and resistance of progressive women and people of color who worked in front of, and behind, the small screen. The Broadcast 41 is essential reading for anyone interested in the history of television and American culture.

The Broadcast 41 is a must-read book for media scholars who want to understand the historical origins of entertainment media as a powerful reinforcer of sexism, racism, and classism in American culture

This richly detailed, forcefully argued feminist history of the ‘Broadcast 41’ sheds scene-changing light on the women artists muffled by the anti-communist blacklist and more. Both the birth of American television and the strange attraction of ‘G-Man masculinity’ are clarified through Stabile’s sharp and lively eye.

...an impassioned, indignant documentation of the 1950s “war over popular culture,” highlighting the work of some particularly talented women heroes who could have shaped television programming to reflect real American values and diversity.

The Broadcast 41 offers an insightful, persuasive history of the American conservative movement that united to suppress the voices of progressive women in broadcasting, and how their perspectives continue to remain relevant today. Stabile's frequent connections between the environment of the 1950s and contemporary US politics – such as the #MeToo movement and the FBI's targeting of 'black identity extremists' – may offer a way into this lesser-known history for a broad audience of readers. This ongoing effort to recover the voices of women, immigrants and people of colour in broadcasting offers a vibrant alternative to what she terms the continuing 'historical amnesia' surrounding the anti-communist blacklist.

Carol A. Stabile is Professor of Women’s, Gender, and Sexuality Studies and Associate Dean of Strategic Initiatives at the University of Oregon.

In this episode of the MIT Podcast, Carol traces the broad and nuanced political beliefs of the Broadcast 41 and how an FBI-backed program of state censorship invoked the paranoia of another American revolution to try and destroy their careers.

This strand on writing, publishing and the politics of communication operates within the remit of the CREATe project Whose Book Is It Anyway, to open out debates on copyright, open access and emergent business models in order to address the wider ethics and politics of communication inside and outside of the academy. This politics is oriented not just toward a contest over, say, the future of the book as an analogue/digital object, but also toward questions of publishing ethics, care, relations and process.