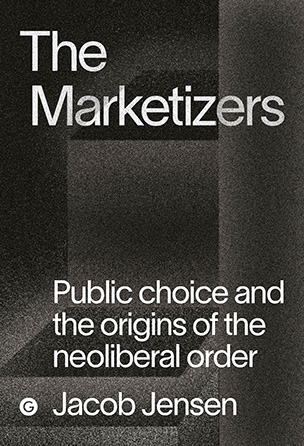 An original interpretation of the neoliberal order's origins, The Marketizers is essential reading for anyone seeking to understand the marketization of politics since the 1980s. The book traces the origins of the neoliberal order to public choice theory and argues that the reinvention of government on the model of the market would have been unimaginable without the emergence of this body of thought. The separation of provision and production in public services, the introduction of competition between service providers, the treatment of citizens as customers, and the use of performance incentives all have origins in the writings of public choice theorists.

From the 1940s through the 1980s, these marketizers gradually eroded the differences between politics and the market as they applied the tools of economics to problems usually considered the purview of political scientists and political philosophers. In response to the extraordinary postwar growth in American public expenditures, they reimagined politics as a marketplace, redefined the relationship between the state and its citizens as a commercial transaction between a firm and its customers, and argued for the marketization of government.

Jacob Jensen is a Postdoc at the Saxo Institute, University of Copenhagen. His research focuses on political and economic thought; neoliberalism; libertarianism; American intellectual history; and twentieth and twenty-first centuries.