In the course of researching my latest book on the screen history of the bicycle, Cycling and Cinema, I watched two or three-hundred films featuring cycling and cyclists. One of the things that struck me again and again about the films I viewed was how enviably empty the roads are. 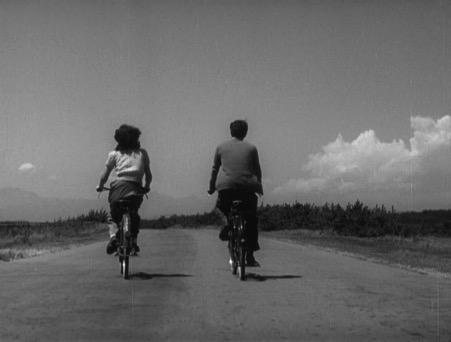 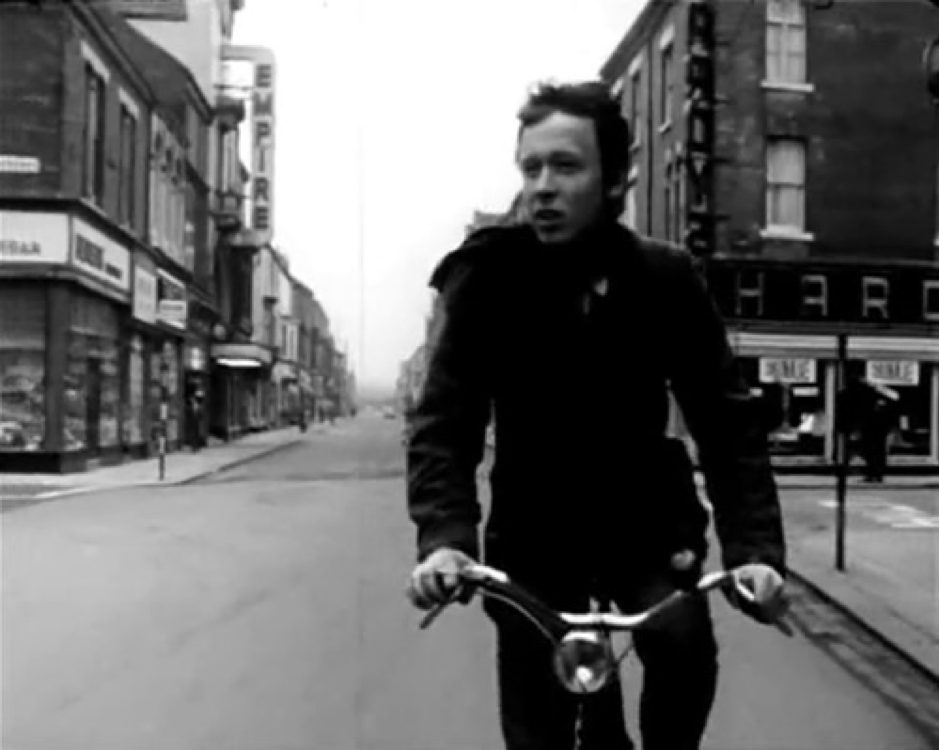 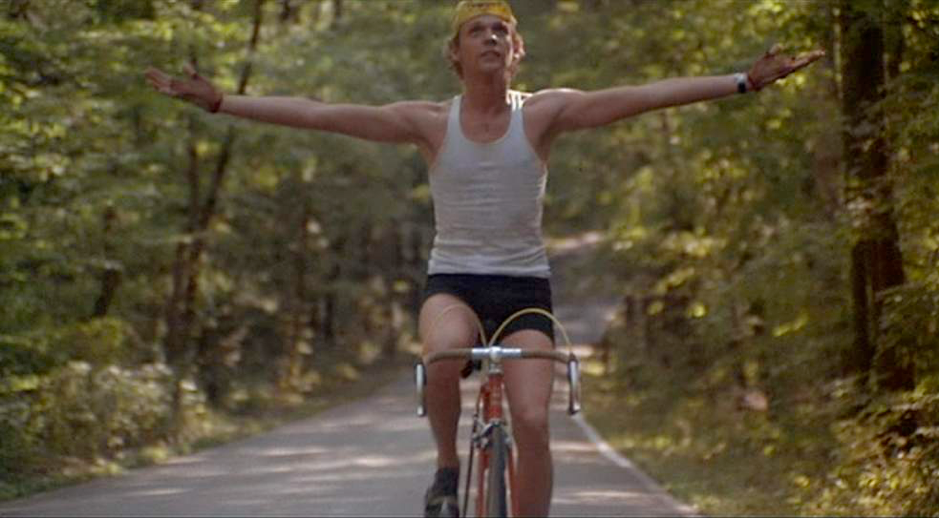 According to the UK government’s Department for Transport, motor traffic in the UK has increased by more than ten times since 1949,[1] most of this driven by private car use. This means that the experience of negotiating British roads, whether as a driver or passenger, cyclist or pedestrian, is all too often frustrating and terrifying. As someone who regularly rides a bike, I found myself gazing at the empty roads in some of the cinematic case studies I was analysing with deep nostalgia, scrutinising the films as documents from an irretrievable past.

Of course, as in other countries, one of the consequences of the UK’s partial lockdown in response to the Covid-19 pandemic, is that we have seen the roads emptied of motor traffic almost overnight, while the skies overhead are virtually free of the contrails of jet aircraft, the clatter of helicopters, and the acid haze of exhaust fumes. 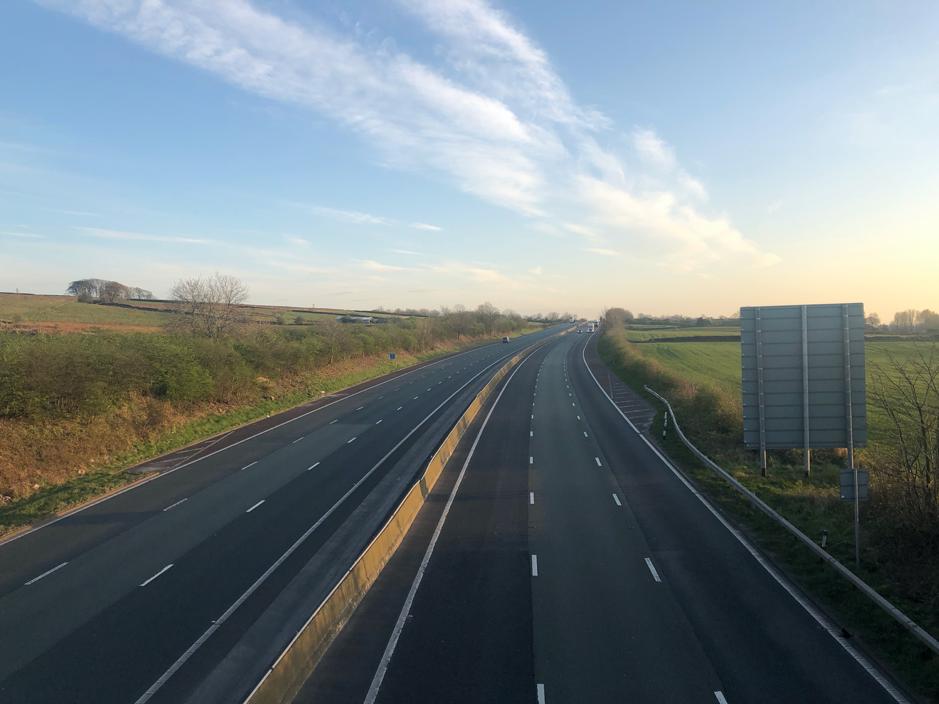 The news media have been documenting this spectacular evacuation of public places, paying particular attention to the uncanny emptiness of urban spaces that would normally be thronging with crowds.[2] The similarity between photographs of deserted city centres and the opening shots of eco-horror film fantasies such as The Day the Earth Caught Fire (Val Guest, 1961), Dawn of the Dead (George Romero, 1978), 28 Days Later (Boyle, 2002), or I Am Legend (Lawrence, 2007), is striking.[3] For film-makers, the image of an empty road is a powerful device for visualizing radical and catastrophic social change. 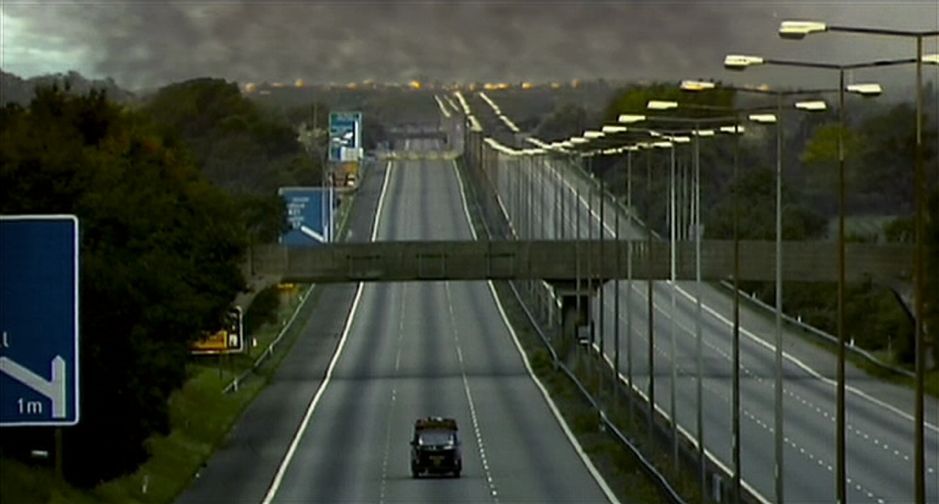 However, one of the surprising features of the lockdown has been that, in order to allow key workers to remain mobile and to encourage people to remain physically active, a number of cities around the world have made renewed efforts to encourage cycling by closing roads to motor traffic, and widening and extending cycle lanes and footpaths.[4] As in most aspects of its response to the pandemic, the UK government has lagged behind other countries in this area. But in mid-April the Department for Transport announced that local authorities in the UK would be permitted to close roads in order to facilitate essential mobility (while promising at the same time that these looser rules will be ‘withdrawn once conditions allow’).[5] And just as we are seeing an unprecedented effort to facilitate the movements of cyclists and pedestrians by city councils and local government, we are also witnessing a corresponding boom in the demand for bicycles, with a manager of one bike shop in Sydney, declaring, ‘We’re the new toilet paper and everyone wants a piece.’[6]

In the context of a global catastrophe that still appears to be in its early stages, what is tentatively hopeful about this phenomenon is that it could be the basis for a new more sustainable infrastructure when we emerge from the pandemic, laying the foundation for a different conception of mobility. For instance, Leicester City Council, which is exploring ‘tactical urbanism’ in its approach to town-planning, has announced that it is considering installing a new network of cycle lanes to ‘enable those who have used the temporary lanes to continue cycling or walking once the lockdown ends.’[7]

It is appropriate that the bicycle is one of the objects through which differently mobile futures are being rehearsed and imagined.

Bicycles are everyday objects for most of us: practical tools for travelling to and from work or the shops, as well as devices that we use for exercise or for fun. However, they are also semiotically flexible vehicles for a range of associated meanings, and so function as expressive devices. The type of bike we ride, the way we ride it and the clothing we wear comprises a rich assemblage of signs about class, gender, race, nationhood and politics as well as individual personality.

Ai Weiwei, the Chinese artist now exiled in the UK, has made extensive use of bikes in his art and observes, ‘The bicycle is very symbolic in China because it’s just like grass really, it belongs to ordinary life and the way we grow up, and yet a bicycle is also a luxury and practical.’ Whereas the bicycle was once closely associated with Communist China’s social and economic system due to Chinese leader Deng Xiaoping’s promise to put a ‘Flying Pigeon’ bicycle in every home, now, in China as elsewhere, car ownership has become a powerful symbol of affluence and social progress. As a consequence, those who ride bikes are increasingly either members of the affluent middle classes or those people too poor to afford a car or motorbike; among other things, this shift is an indication of the way that the symbolic significance of the bicycle is in perpetual motion. 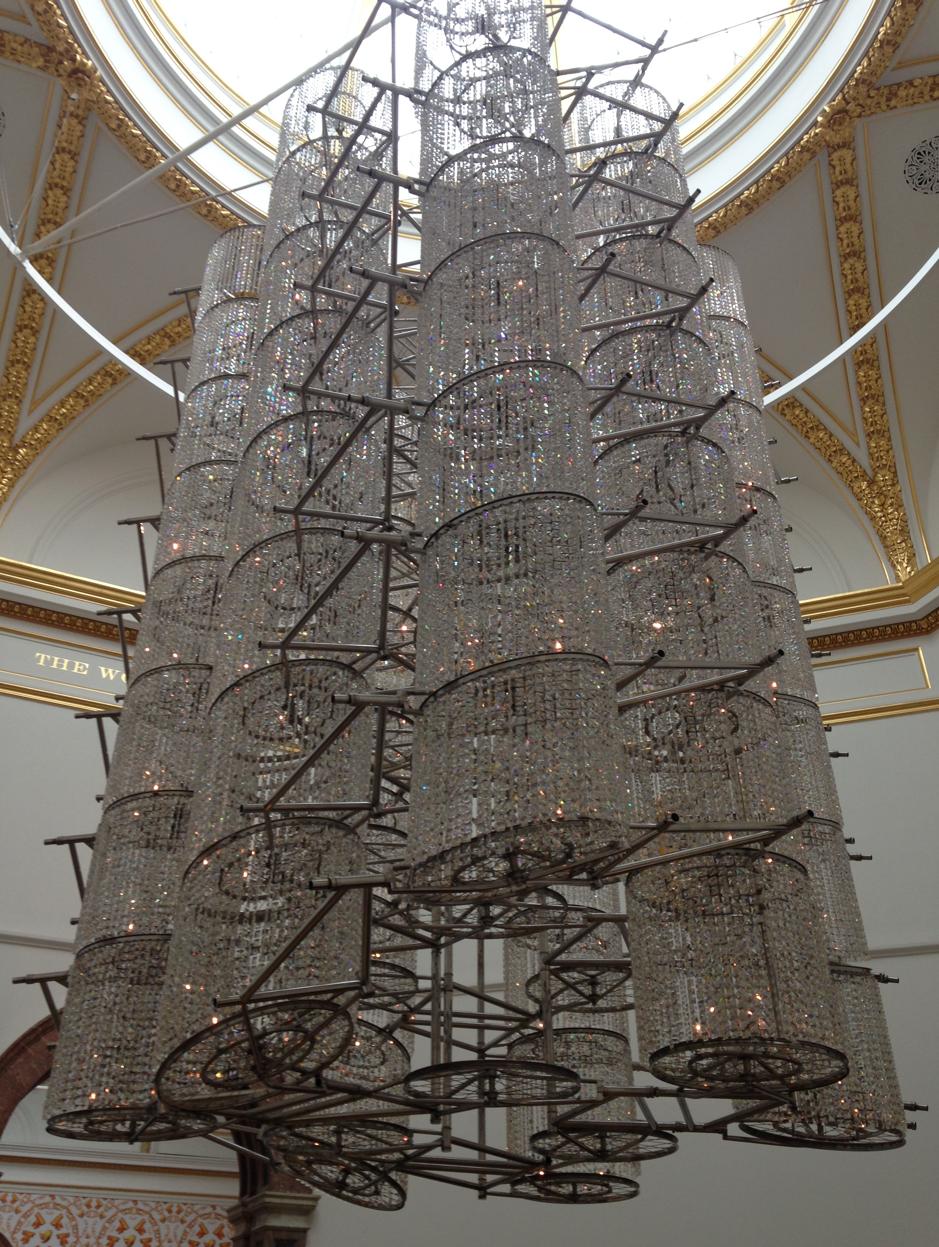 Ai has produced an ongoing series of spectacular, intricate sculptural works assembled from dozens, hundreds, or sometimes thousands of identical bikes, which invite us to read them as commentaries on wasteful industrial over-production. Given that they are made from and named after ‘Forever’ bikes, the most ubiquitous Chinese brand, we might also understand these works as an ironic commentary on the Chinese government’s expansive ideological project.

On a smaller scale, one of Ai’s most ‘moving’ bicycle works, With Flowers (2013-15), draws out another symbolic dimension of the bicycle. Combining digital photography with public sculpture and performance art, With Flowers was produced after the Chinese government confiscated his passport in 2011, banning him from travelling outside China. In protest at the injustice of this lockdown, Ai placed his bicycle in the street outside his studio gates in Beijing and every day for nearly two years, he placed a bouquet of flowers in the basket, and posted a photograph of the flowers online. In a very simple way, the association of the bicycle with free movement takes on a renewed political significance in this work which also represents a quietly defiant insistence on beauty in the face of political repression. More pointedly, With Flowers invokes the ‘Hundred flowers campaign’ in which, for a brief period in the 1950s, Mao Zedong solicited criticism of the Communist regime with the literary quotation, ‘Let a hundred flowers bloom; let a hundred schools of thought contend.’

The bicycles that recur throughout Ai’s work can also be understood as making a more specific reference to the injustices of the Chinese state, serving as memorials to Yang Jia, a Beijing resident who was arrested in 2007 for riding an unlicensed bicycle and who was the subject of One Recluse, a 2010 documentary by Ai. Having made allegations of police brutality after his arrest, Yang was subsequently executed in 2008 after he attacked a police station in revenge, killing six police officers and wounding another. With the trial held behind closed doors, Yang’s case became a cause célèbre since, for some commentators, his action was seen as a form of protest against an oppressive regime.

Thus, for Ai, as for the suffragists of the late 19th and early 20th century, the bicycle is deployed in his work as a tool with which to protest against inequality and demand for a new social order. From the late 19th century onwards, the attraction of cycling for many of its advocates was that the greater physical mobility offered by bicycles and tricycles would engender greater social mobility. Most notably, perhaps, it offered women a degree of personal mobility that was previously only available to men. This sense of exhilarating possibility is captured in Hyde Park Bicycling Scene, the delightful 1896 actuality by early film-maker Robert W Paul, which shows women happily wheeling past horse-drawn carriages and male cyclists.

For its advocates, the bicycle promised to transport its rider to a more equal future, but for various reasons, we have yet to arrive there. Women remain less likely to cycle than men, while as Melody Lynn Hoffmann observes, ‘Mainstream bicycle culture and advocacy in the United States is dominated by middle- to upper-class white bicyclists.’[8]

Nevertheless, against the grim background of the current global catastrophe, there is some small cause for hope in the current renewal of enthusiasm for cycling. The lockdown imposed in various countries around the world to control the spread of the virus has become a grand, accidental experiment with living in a non-car-dependent world. It poses the challenge of how to embrace what Greater Manchester’s mayor Andy Burnham terms ‘a new normality’ that encompasses a ‘national re-evaluation of work,’ sustainable energy policy, improved internet connections and better walking and cycling networks.[9]

Reports have indicated that a key reason the UK government was reluctant to introduce lockdown measures in response to the spread of Covid-19 was (alongside an ideological commitment to protecting the economy above all else, and an ill-conceived strategy of ‘herd immunity’ advocated by the country’s chief scientific adviser) that they did not believe the population would comply with what the prime minister described as draconian measures.

What the collective public response has demonstrated however, is that people will willingly change their behavior radically en masse almost overnight, if persuaded that it is socially necessary. This is cause for hope not just in relation to the current pandemic but also in relation to the catastrophic threat posed by global heating which, it seemed until just a few months ago, was unstoppable due to people’s intransigence and self-interest.

Just as the Covid-19 crisis has revealed in the starkest terms the inadequacy of laissez-faire capitalism, nationalist exceptionalism and libertarian ideology when faced with a large-scale crisis, it has also revealed the possibility that the pandemic need not be followed by a return to ‘business as usual.’ At a moment in which it seems that the dystopian futures imagined by science-fiction films and speculative literature could be realized, the proliferation of bicycles on the quiet, empty roads around us presents us with an apparently utopian counter-image of a different, slower, calmer social order that is well within our reach. In his history of cycling, King of the Road, published in the aftermath of the 1973 oil crisis, Andrew Ritchie observed that this mundane, over-familiar machine, that was by then over 150 years’ old, retained its power to transform the world: ‘We take the bicycle too much for granted, but at the same time, we in England do not use it enough. It is a simple machine. But it could have a far-reaching and revolutionary effect on the world in the next century.’[10] Perhaps it is time for a revolution.

[6] The reference is to the phenomenon of people hoarding toilet paper in March 2020 in anticipation of a lockdown. https://www.theguardian.com/lifeandstyle/2020/apr/22/bicycles-are-the-new-toilet-paper-bike-sales-boom-as-coronavirus-lockdown-residents-crave-exercise