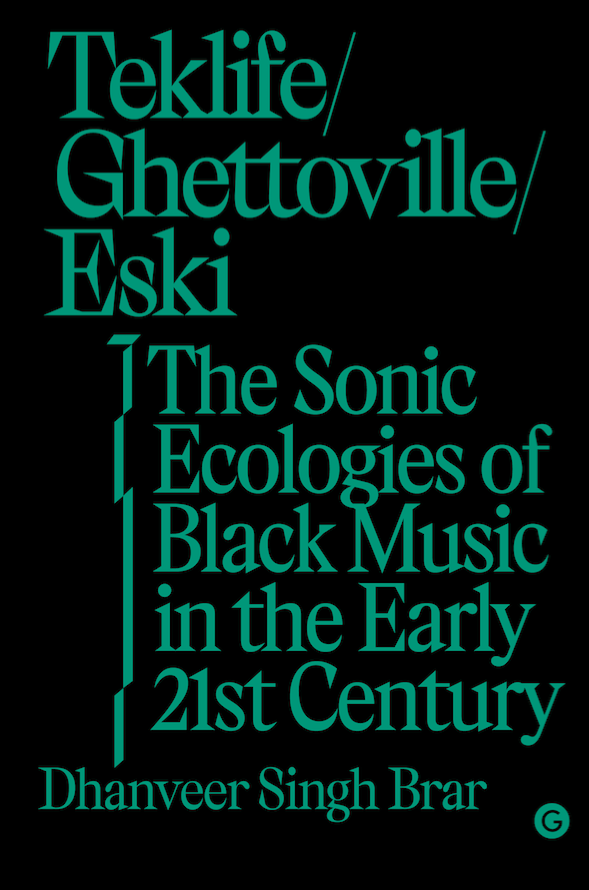 Teklife, Ghettoville, Eski argues that Black electronic dance music produces sonic ecologies of Blackness that expose and reorder the contemporary racialization of the urban—ecologies that can never be reduced simply to their geographical and racial context. Dhanveer Singh Brar makes the case for Black electronic dance music as the cutting-edge aesthetic project of the diaspora, which due to the music's class character makes it possible to reorganize life within the contemporary city.

Closely analysing the Footwork scene in South and West Chicago, the Grime scene in East London, and the output of the South London producer Actress, Brar pays attention to the way each of these critically acclaimed musical projects experiments with aesthetic form through an experimentation of the social. Through explicitly theoretical means, Brar foregrounds the sonic specificity of 12" records, EPs, albums, radio broadcasts, and recorded performances to make the case that Footwork, Grime, and Actress dissolve racialized spatial constraints that are thought to surround Black social life.

Pushing the critical debates concerning the phonic materiality of Blackness, undercommons, and aesthetic sociality in new directions, Brar rethinks these concepts through concrete examples of contemporary Black electronic dance music production that allows for a theorization of the way Footwork, Grime, and Actress have--through their experiments in Blackness--generated genuine alternatives to the functioning of the city under financialized racial capitalism.

When Juan Atkins said he wanted to land a UFO on a track, what kind of place would he be landing it on?... Via the psychogeographies and cartographies of South London by way of ‘Ghettoville’, South and West Chicago’s ‘Teklife’ and East London’s ‘Eski’ — what Brar’s analysis does is highlight and connect the race/class intersections that are so often overlooked in mainstream coverage of music.

Brar propels us through landscapes of sound and sense at once utterly familiar and strange. We emerge from this book with a shocked recognition that we as urban residents are living in contexts that both exceed the ways in which we understand them yet which penetrate our very core as metabolism, infection, and vibration. The book is one of the most accomplished demonstrations of the critical importance of Black study and its capacities to articulate urban life in unprecedent ways.

This book will be unlike anything you’ve ever read before: challenging and revealing, it refuses to pander to some of the more predictable observations of mainstream music coverage. In Teklife, Ghettville, Eski, author Dhanveer Singh Brar dives into the footwork scene in South and West Chicago, the grime scene in East London, the back catalogue of London artist Actress and more to find out, as is outlined in the blurb, “how Black electronic dance makes it possible to reorganise life within the contemporary city”.

In meticulously examining how these younger genres are shaped by space, race, and class, and how legacy Black electronic genres such as house, techno, and jungle emerged, Singh Brar looks at dance music through a unique lens. For every self-respecting electronic music fan, Teklife, Ghettoville, Eski is a must-buy; a beautiful read, and an education tool.

Dhanveer Singh Brar is Lecturer in Black British History at the University of Leeds, having previously spent four years teaching in the Department of Visual Cultures at Goldsmiths. Prior to that he held positions as a Junior Research Fellow at the Institute of Advanced Studies, University College London, and as an Andrew W. Mellon Postdoctoral Fellow in the Humanities at Penn Humanities Forum, University of Pennsylvania. He was awarded a PhD in Media and Communications from Goldsmiths in 2013.