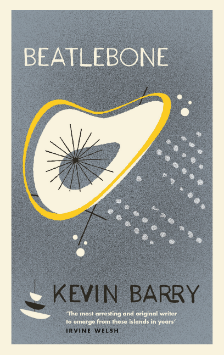 "He will spend three days alone on his island. That is all that he asks . . . John is so many miles from love now and home. This is the story of his strangest trip."

John owns a tiny island off the west coast of Ireland. Maybe it is there that he can at last outrun the shadows of his past.

The tale of a wild journey into the world and a wild journey within, Beatlebone is a mystery box of a novel. It’s a portrait of an artist at a time of creative strife. It is most of all a sad and beautiful comedy from one of the most gifted stylists now at work.

Kevin Barry is the author of the novels City of Bohane and Beatlebone and two short story collections, Dark Lies the Island and There Are Little Kingdoms. He was awarded the Rooney Prize in 2007 and won The Sunday Times EFG Short Story Prize in 2012. For City of Bohane he was shortlisted for the Costa First Novel Award and the Irish Book Award, and won the Author’s Club First Novel Prize, The European Prize for Literature and the IMPAC Prize.