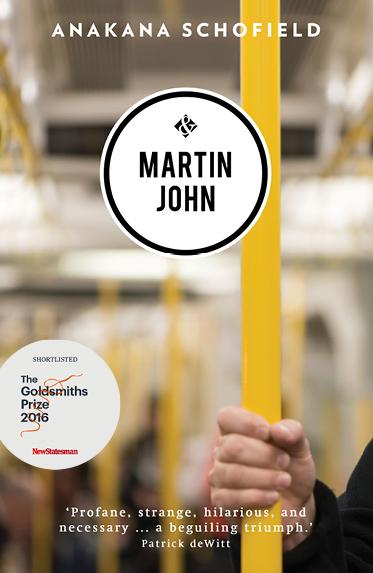 An unwinding of damaged minds through internalised language, Martin John traces the lives of a sex offender and his mother, as they try to keep him on the straight and narrow. The book is an extraordinary engagement with the words we use to ourselves, to each other, to think about the unthinkable: to deal with the harm we do within families, via systems of punishment and care, as well as the harms we suffer ourselves. Most extraordinarily, Martin John is not only a virtuoso evocation of troubling states of mind: it's alarmingly funny too.

Martin John must put a stop to it. They have an agreement, he and Mam. Get out to Aunty Noanie on Wednesday. Stop talking rubbish. Don’t go near the buses and don’t go down on the Tube. Keep yourself on the outside. Get a job at night. Get a job at night or else I’ll come for ya.

Written with all the electrifying humour of her award-winning debut Malarky, exhibiting a startling grasp of the loops and obsessions of a molester’s mind, Martin John is a testament to Anakana Schofield’s skill and audacity—and stands as a brilliant, Beckettian exploration of a man’s long slide into deviancy.

Anakana Schofield won the Amazon.ca First Novel Award and the Debut-Litzer Prize for Fiction in 2013 for her debut novel Malarky. Malarky was also nominated for the Ethel Wilson Fiction Prize, selected as a Barnes & Noble Discover Great New Writers pick and named on many Best Book of the Year lists for 2012 and 2013. Martin John, her critically acclaimed second novel, was shortlisted for the Giller Prize. Schofield contributes criticism and essays to the London Review of Books Blog, The Guardian, The Irish Times, The Globe and Mail and more.