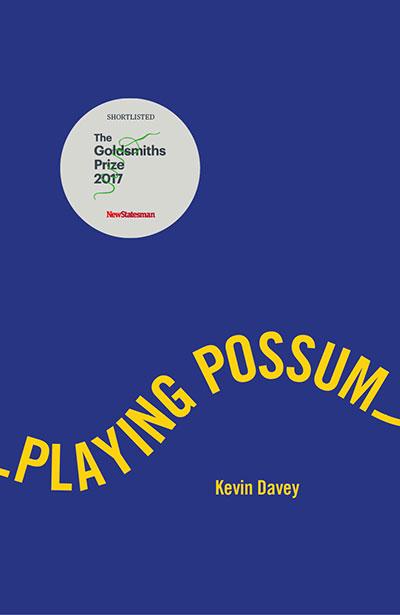 A. L. Kennedy on Playing Possum

Playing Possum is a vastly energetic and confident book, a narrative that races along, packed with references and cross references mingling literature, film, time travel and visual art. 90 years after the first publication of The Waste Land - and perhaps far too late – a modern day protagonist seeks proof of a murder and flight. A fictional investigator pursues a fictionalised – and murderous – T.S. Eliot from London towards a perhaps fictitious night spent at a hotel in Whitstable in 1922. The aftermath of his deed may have been immortalised in a suitably shocking painting by possible accomplice Otto Dix. Davey’s plot begins to tangle and gambol from the outset. The text – filled with dialogue, asides and allusions – is rich enough to repay rereading. Its time jumps and linguistic experimentation, its mosaic plot and dark humour is a joyful exploration of the novel’s boundaries as a form.

Playing Possum is an exuberant modernist reminder that T.S. Eliot was a fan of detective fiction, Charlie Chaplin and the music hall.

Fleeing from a violent incident in London in 1922, pursued by police and the author, Tom spends a troubled night in the Duke of Cumberland hotel in Whitstable. Demobilised soldiers hold a meeting below his window and a silent movie is being shot on the seafront. Davey draws on local history and literature, songs, films and artwork from the period to produce a novel Eliot himself would have enjoyed.

Kevin Davey was born in Shelley, Suffolk, and now lives in Whitstable. He went to the University of Kent, Canterbury in 1976 to study Sociology and English, staying on to teach there and write an MPhil dissertation on the work of Raymond Williams. He worked in further education in London in the 1980s and 1990s and was chair of the Socialist Society (1986-88) and chair of the Socialist Conferences in Chesterfield (1987-88). He went on to work for Charter 88 and helped to create the online publishing network Open Democracy. Davey was a regular contributor to Tribune and New Statesman & Society in the 1980s and 1990s, and was editor of the radical monthly New Times from 1999 to 2000.His book English Imaginaries: Anglo-British Approaches to Modernity, an investigation into changing forms of Englishness in the twentieth century, was published by Lawrence and Wishart in 2000. Playing Possum is his first novel.