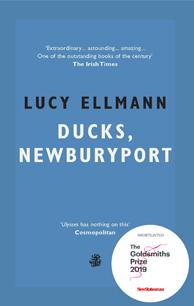 The winner of the 2019 Goldsmiths Prize.

Latticing one cherry pie after another, an Ohio housewife tries to bridge the gaps between reality and the torrent of meaningless information that is the United States of America. She worries about her children, her dead parents, African elephants, the bedroom rituals of ‘happy couples’, Weapons of Mass Destruction, and how to hatch an abandoned wood pigeon egg. Is there some trick to surviving survivalists? School shootings? Medical debts? Franks ’n’ beans? A scorching indictment of America’s barbarity, past and present, and a lament for the way we are sleepwalking into environmental disaster, Ducks, Newburyport is a heresy, a wonder—and a revolution in the novel.

Born in Illinois, Lucy Ellmann moved to England as a teenager. Her first novel, Sweet Desserts, won the Guardian Fiction Prize. Her most recent novel, Mimi, was published in 2013. She lives in Edinburgh.

Ducks, Newburyport is a massive achievement of a novel, which plays masterfully on every one of the reader’s senses. By running the world, as it is known to her protagonist, through the mind of an Ohio woman, a wife and mother of four, while she is preparing pies in her kitchen, in one 1000 page long sentence, alongside flashes of the events that make up her life, Ellman gives us an inspired demonstration of what it’s like to be the warm vanishing point of a hostile universe.

It is as playful and urgent, humanist and unflinching, as the other big novels that precede it in the literary canon. It has Icelandic baby bonnets, lemon drizzle cake and The Nickel Mines Massacre. And then there is the lioness.