The Man Who Saw Everything 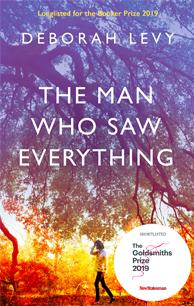 In 1988 Saul Adler (a narcissistic, young historian) is hit by a car on the Abbey Road. He is apparently fine; he gets up and goes to see his art student girlfriend, Jennifer Moreau. They have sex then break up, but not before she has photographed Saul crossing the same Abbey Road.

Saul leaves to study in communist East Berlin, two months before the Wall comes down. There he will encounter - significantly - both his assigned translator and his translator's sister, who swears she has seen a jaguar prowling the city. He will fall in love and brood upon his difficult, authoritarian father. And he will befriend a hippy, Rainer, who may or may not be a Stasi agent, but will certainly return to haunt him in middle age.

Slipping slyly between time zones and leaving a spiralling trail, Deborah Levy's electrifying The Man Who Saw Everything examines what we see and what we fail to see, the grave crime of carelessness, the weight of history and our ruinous attempts to shrug it off.

Deborah Levy is a British playwright, novelist and poet. She is the author of seven novels: Beautiful Mutants (1986); Swallowing Geography (1993); The Unloved (1994); Billy & Girl (1996); Swimming Home (2011); Hot Milk (2016) and The Man Who Saw Everything (2019). Swimming Home was shortlisted for the Man Booker Prize 2012; Hot Milk was shortlisted for the Man Booker Prize 2016 and the Goldsmiths Prize 2016. Deborah is also the author of an acclaimed collection of short stories, Black Vodka (2013), and two ‘living autobiographies’, Things I Don’t Want To Know and The Cost of Living. She has written for the Royal Shakespeare Company and is a Fellow of the Royal Society of Literature.

Sjón on The Man Who Saw Everything

In The Man Who Saw Everything, Deborah Levy uses her acute literary skills to create a compelling story where the main character’s unusual circumstances reveal the shared human impossibility of really knowing the workings of one’s mind and the forces that move us. As Saul Adler tries to piece together his story of love and loss, moulded by historical events big and small, and his own impact for good or bad on the storylines of the people in his life, the reader is challenged to question how much of what we perceive as truth or reality is based on wishful thinking and how much on evasion. And all of it is executed in a melancholy and highly seductive style, so that the novel becomes a mosaic celebrating the inevitable sadness of life.