We Are Made Of Diamond Stuff 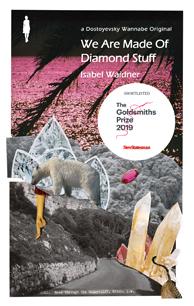 We Are Made Of Diamond Stuff is an innovative and critically British novel, taking issue with the dream of national belonging. Set on the Isle of Wight, a small island off the south coast of England, it collides literary aesthetics with contemporary working-class cultures and attitudes (B.S. Johnson and Reebok classics), works with themes of empire, embodiment and resistance, and interrogates autobiographical material including the queer migrant experience.

Isabel Waidner is a writer and critical theorist. Their books include We Are Made Of Diamond Stuff (2019), Gaudy Bauble (2017) and Liberating the Canon: An Anthology of Innovative Literature (ed., 2018), published by Dostoyevsky Wannabe. Waidner’s critical and creative texts have appeared in journals including AQNB, Cambridge Literary Review, The Happy Hypocrite, Tank Magazine and Tripwire. They are the co-founder of the event series Queers Read This at the Institute of Contemporary Art (with Richard Porter), and an academic at University of Roehampton, London.

Guy Gunaratne on We Are Made Of Diamond Stuff

There is not a single ordinary sentence in Isabel Waidner’s We Are Made of Diamond Stuff. A novel that reads like an act of sabotage, of resistance, written as a song-scream against our nullifying need to belong. It is charged with undeniable life, like some explosive projectile aimed at all our insidious narratives (nationalism, exclusionary culture, corporatism, conservatism and so much more). You hope it goes off, that it blows open everything in its sights—just so that you may ride out on its wake. It leaves you laughing, breathless but also heartbroken and hopeful, like the spirited survivors in the book itself. Like lightning, this novel. It is a furious work, stuffed with necessary power, purpose and also affection. And to borrow one of its lines to re-articulate it—Like the lypard, it navigates dimensions.