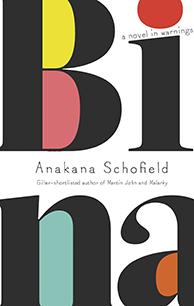 My name is Bina and I'm a very busy woman. That's Bye-na, not Beena. I don't know who Beena is but I expect she's having a happy life. I don't know who you are, or the state of your life. But if you've come all this way here to listen to me, your life will undoubtedly get worse. I'm here to warn you...

So begins this 'novel in warnings' - an unforgettable tour de force in the voice of an ordinary-extraordinary woman who has simply had enough. Through the character of Bina, who is writing out her story on the backs of discarded envelopes, Anakana Schofield filters a complex moral universe filled with humour and sadness, love and rage, and the consolations, obligations and mysteries of lifelong friendship. A work of great power, skill, and transformative empathy from a unique and astonishing writer.

Anakana Schofield is the author of the acclaimed, Giller Prize-shortlisted novel Martin John, which was also a finalist for the Ethel Wilson Fiction Prize, the Goldsmiths Prize in the UK, a New York Times Editors' Choice and named a best book of the year by the Wall Street Journal, Globe and Mail, National Post, Sunday Business Post, Toronto Star and Irish Times, among others. Her debut novel Malarky won the Amazon.ca First Novel Award, the Debut-Litzer Prize for Fiction in the United States and was a finalist for the Ethel Wilson Fiction Prize. Her writing and reviews have appeared in the Guardian, Irish Times, Globe and Mail, National Post, London Review of Books blog, and The Long Gaze Back: An Anthology of Irish Women Writers. She lives in Vancouver, British Columbia.

Startlingly original and horribly funny, Anakana Schofield’s Bina is that rare thing: a black comedy about euthanasia. Composed as a series of warnings scribbled on the backs of envelopes from the safety of her bed, the narrator is a septuagenarian who has had enough. And we can see why: her front garden is filled with political activists, her back garden with medical waste; her lodger stayed on for an extra ten years and she is suspected of murdering her best friend. In all her despair, and empathy for the despair of others, Bina emerges from her elliptical missives, addressed to everyone but no-one in particular, as an eccentric heroine of monumental moral courage.