The Mermaid of Black Conch 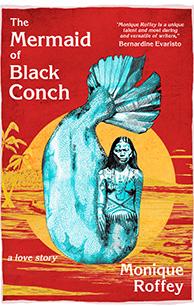 April 1976: St Constance, a tiny Caribbean village on the island of Black Conch, at the start of the rainy season. A fisherman sings to himself in his pirogue, waiting for a catch – but attracts a sea-dweller he doesn’t expect. Aycayia, a beautiful young woman cursed by jealous wives to live as a mermaid, has been swimming the Caribbean Sea for centuries. And she is entranced by this man David and his song.

But her fascination is her undoing. She hears his boat’s engine again and follows it, and finds herself at the mercy of American tourists, landed on the island for the annual fishing competition. After a fearsome battle, she is pulled out of the sea and strung up on the dock as a trophy. It is David who rescues her, and gently wins her trust – as slowly, painfully, she starts to transform into a woman again. But transformations are not always permanent, and jealousy, like love, can have the force of a hurricane, and last much longer…

Monique Roffey is an award-winning Trinidadian-born British writer of novels, essays, memoir and literary journalism. Her novels have been translated into five languages, shortlisted for the Costa and Orange awards. In 2013, Archipelago won the OCM BOCAS Award for Caribbean Literature.

Sarah Ladipo Manyika on The Mermaid of Black Conch

The Mermaid of Black Conch is an extraordinary novel in which myth, fairy tale, adventure and history are combined to produce a magical tale that provokes as much as it delights. This timeless story of an ancient mermaid who captures the heart of a local fisherman is a powerful feminist tale which speaks artfully to the nature of love and possession, race and class, creolization and colonialism.  Filled with unforgettable characters and scenes, the story moves effortlessly between prose, poetry, and journal entries with playful interweaving of various Englishes including patois and English Creole. This is one of those rare gems of a novel that can be read and enjoyed on many levels—it’s a whimsical love story, a history of the Caribbean and its indigenous peoples, an ode to Mother Earth, and an allegory for our times. The book sings with warm echoes of Jean Rhys, Ernest Hemingway and Zora Neale Hurston.