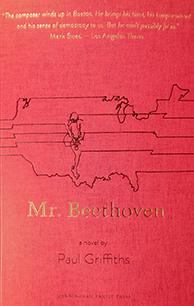 In 1823 Beethoven received a commission to write a biblical oratorio in the United States. How could this have worked?

As Beethoven wrestles with his muse, and his librettist Rev. Ballou, he comes to rely on two women. Thankful, who conducts his conversations using Martha’s Vineyard sign language, and a kindred spirit: the widow Mrs. Hill. Meanwhile all Boston waits in anxious expectation of a first performance the composer, and the world, will never hear.

Variously admonishing the amateur music society and laughing in the company of his hosts’ children, the immortal composer is brought back to the fullness of life. Griffiths (former music critic: The New Yorker; The New York Times. Author: let me tell you; Modern Music And After) invents only what is strictly possible. His historiography weaves through the text in counterpoint, revealing the fragility of the traces he uses to give Mr. Beethoven seven more years.

Paul Griffiths is an internationally respected authority on classical music, whose books have been translated into twelve languages. He has worked as a music critic on major publications in London (The Times) and New York (The New York Times, The New Yorker). He received an OBE for services to music literature and composition, and has been honoured also in France (Chevalier dans l'Ordre des Arts et des Lettres) and the United States (Member of the American Academy of Arts and Sciences). His first novel, 'Myself and Marco Polo' (Chatto & Windus), won a Commonwealth Writers' Prize in 1990, and extracts from his third, 'let me tell you' (Reality Street), were made into a song cycle by Hans Abrahamsen in 2013 for Barbara Hannigan and the Berlin Philharmonic Orchestra.

Will Eaves on Mr Beethoven

What would Beethoven have done with another seven years of life, and where, in the 1830s, might he have gone? The answer, in this audacious but exacting extension of the composer’s late period, is America, where an oratorio, Job, is completed (and performed) in Boston. Suffering and revelation are the subject-matter, but in Paul Griffiths’ hands, the Biblical sorrow undergoes a lasting modulation into a new key of delight in friendship, communication, and creativity.