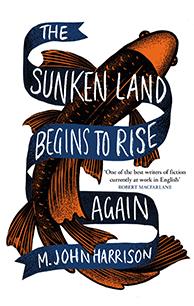 Modern London and an uncanny presence living in the rivers and canals come together in the first new novel for seven years from one of SF's best-reviewed and most-loved authors.

Shaw had a breakdown, but he's getting himself back together. He has a single room, a job on a decaying London barge, and an on-off affair with a doctor's daughter called Victoria, who claims to have seen her first corpse at age fourteen. It's not ideal, but it's a life. Or it would be if Shaw hadn't got himself involved in a conspiracy theory that, on dark nights by the river, seems less and less theoretical... Meanwhile, Victoria is up in the Midlands, renovating her dead mother's house, trying to make new friends. But what, exactly, happened to her mother? Why has the local waitress disappeared into a shallow pool in a field behind the house? And why is the town so obsessed with that old Victorian morality tale, The Water Babies? As Shaw and Victoria struggle to maintain their relationship, the sunken lands are rising up again, unnoticed in the shadows around them.

M. John Harrison is the author of, amongst others, the Viriconium stories, The Centauri Device, Climbers, The Course of the Heart, Signs of Life, Light and Nova Swing. He has won the Boardman Tasker Award (Climbers), the James Tiptree Jr Award (Light) and the Arthur C. Clarke Award (Nova Swing). He lives in Shropshire.

Will Eaves on The Sunken Land Begins to Rise Again

On the banks of the Thames, fifty-something Shaw gets involved with a crazy website about evolutionary biology. His girlfriend, Victoria, drifts westwards to a town on the Severn, where the inhabitants are sinking into ponds, reading The Water Babies, and changing for ever. The Sunken Land Begins to Rise Again is a brilliant realist fantasy about love in middle-age and the dissolution of the post-war settlement. In a series of startling knights’ moves across our inner and outer landscapes, M. John Harrison quietly overturns all grounds for supposing we know who we are and where we have come from.