Maps of Our Spectacular Bodies 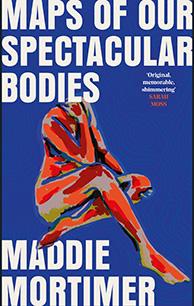 Something gleeful and malevolent is moving in Lia’s body, learning her life from the inside out. A shape-shifter. A disaster tourist. It’s travelling down the banks of her canals. It’s spreading.

When a sudden diagnosis upends Lia’s world, the boundaries between her past and her present begin to collapse. Deeply buried secrets stir awake. As the voice prowling in Lia takes hold of her story, and the landscape around becomes indistinguishable from the one within, Lia and her family are faced with some of the hardest questions of all: how can we move on from the events that have shaped us, when our bodies harbour everything? And what does it mean to die with grace, when you’re simply not ready to let go?

Maps of Our Spectacular Bodies is a story of coming-of-age at the end of a life. Utterly heart-breaking yet darkly funny, Maddie Mortimer’s astonishing debut is a symphonic journey through one woman’s body: a wild and lyrical celebration of desire, forgiveness, and the darkness within us all.

Maddie Mortimer was born in London in 1996. She received her BA in English Literature from the University of Bristol.

Her writing has featured in The Times and her short films have screened at festivals around the world. She is co-writing a TV series currently in development with Various Artists Ltd. In 2019 she completed the Faber Academy Writing a Novel course. Maps of Our Spectacular Bodies is her first novel.

Judge Tom Gatti on Maps of Our Spectacular Bodies

"In this extraordinary and ambitious debut novel, Mortimer has found a voice for the wild and malevolent presence – part Devil, part Lord of Misrule, part wisecracking best friend – that roams inside her protagonist, unravelling the strands of her life. A love story ruled by biology, Maps of Our Spectacular Bodies takes interiority to a new level."