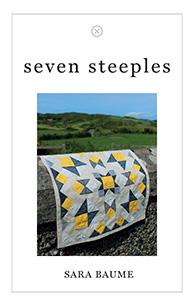 "The mountain remained, unclimbed, for the first year that they lived there."

Bell and Sigh, a couple in the infancy of their relationship, cut themselves off from friends and family. "Them in and the world out." From the top of the nearby mountain, they are told, you can see seven standing stones, seven schools, and seven steeples. All you have to do is climb.

Taking place in a remote house in the south-west of Ireland, this rich and vivid novel spans seven years and speaks to the times we live in, asking how we may withdraw, how better to live in the natural world, and how the choices we make or avoid lead us home.

Sara Baume was raised and still lives in Co. Cork, Ireland. She works as an artist as well as a writer, and her fiction and criticism have been published in anthologies, newspapers and journals such as The Irish Times, The Guardian, The Stinging Fly and Granta magazine.

She has won the Davy Byrnes Short Story Award, the Hennessy New Irish Writing Award, the Rooney Prize for Irish Literature, an Irish Book Award for Best Newcomer and the Kate O'Brien Award. Her debut novel, Spill Simmer Falter Wither, was shortlisted for the Costa First Novel Award and longlisted for the Guardian First Book Award, the Warwick Prize for Writing and the Desmond Elliott Prize, and won the Geoffrey Faber Memorial Prize.

"A singular portrait of cohabitation in isolation. Cloistered in a rented cottage beside a mountain, a couple’s individuality dissolves as their domestic life gives way to nature. The bleak, beautiful prose resonates like a ghost story: haunting and unforgettable."