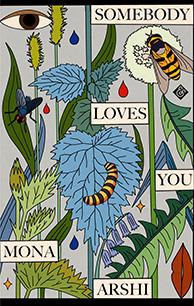 "A teacher asked me a question, and I opened my mouth as a sort of formality but closed it softly, knowing with perfect certainty that nothing would ever come out again."

Ruby gives up talking at a young age. Her mother isn’t always there to notice; she comes and goes and goes and comes, until, one day, she doesn’t. Silence becomes Ruby’s refuge, sheltering her from the weather of her mother’s mental illness and a pressurized suburban atmosphere.

Plangent, deft, and sparkling with wry humor, Somebody Loves You is a moving exploration of how we choose or refuse to tell the stories that shape us.

Mona Arshi was born in West London, where she still lives. She worked as a human-rights lawyer with the NGO Liberty for a decade before receiving a Master’s in creative writing from the University of East Anglia.

Her debut poetry collection Small Hands was published in 2015, winning the Forward Prize for Best First Collection. Mona Arshi regularly appears on BBC Radio 4. Her poems have been published in The Sunday Times, The Guardian and The Times of India and most recently the London Underground. She is just about to take up a role as a creative writing fellow at Trinity College Cambridge and this week was made a fellow of the Royal Society of Literature.

Her debut novel Somebody Loves You was published in 2021 and was praised by Salena Godden for being a ‘vivid and tender, poetic and beautiful book’ and was listed for the Republic of Consciousness Prize, the Jhalak Prize for Book of the Year, and the Desmond Elliott Prize.

Judge Natasha Brown on Somebody Loves You

"Like its narrator, Somebody Loves You is quietly exceptional. Though silent, Ruby’s voice sparkles and surprises as she navigates early adolescence with burgeoning insight and wit. Deftly-woven chapters, subtle and assured in their piercing poetry, amount to an astonishingly broad and empathetic tapestry of modern Britain."