there are more things 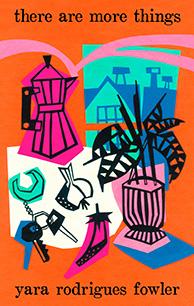 there are more things is a novel about two women - Melissa and Catarina.

Born to a well-known political family in Olinda, Brazil, Catarina grows up in the shadow of her dead aunt, Laura. Melissa, a South London native, is brought up by her mum and a crew of rebellious grandmothers.

In January 2016, Melissa and Catarina meet for the first time, and, as political turmoil unfolds across Brazil and the UK, their friendship takes flight. Their story takes us across continents and generations - from the election of Lula to the London riots to the darkest years of Brazil's military dictatorship.

there are more things builds on the unique voice of Yara's debut to create a sweeping novel about history, revolution and love. In it we see sisterhood and queerness, and, perhaps, glimpse a better way to live.

Yara Rodrigues Fowler is a writer from South London.

Her first novel, Stubborn Archivist, was longlisted for the Desmond Elliott and Dylan Thomas Prizes and shortlisted for the Sunday Times Young Writer of the Year 2019. Her second novel, there are more things will be published in April 2022.

As a work in progress, there are more things received the Society of Authors' John C Lawrence Award and was shortlisted for the Eccles Centre and Hay Festival Writers' Award. Yara is also a part-time organiser.

Judge Tim Parnell on there are more things

"A novel which manages at once to be a celebration of the pleasure of being alive and an impassioned condemnation of some of the horrors of contemporary history.

"True to its insistence on the capaciousness of the world and the consequent possibilities for change, the book finds hope in collective action. But this is no ordinary political fiction in which medium provides a bland vessel for message. Unhampered by conventions of structure (at the level of both story and sentence), there are more things enacts its belief in the redemptive potential of ways of seeing which lie outside of conventional forms of thought. A joy of a book."