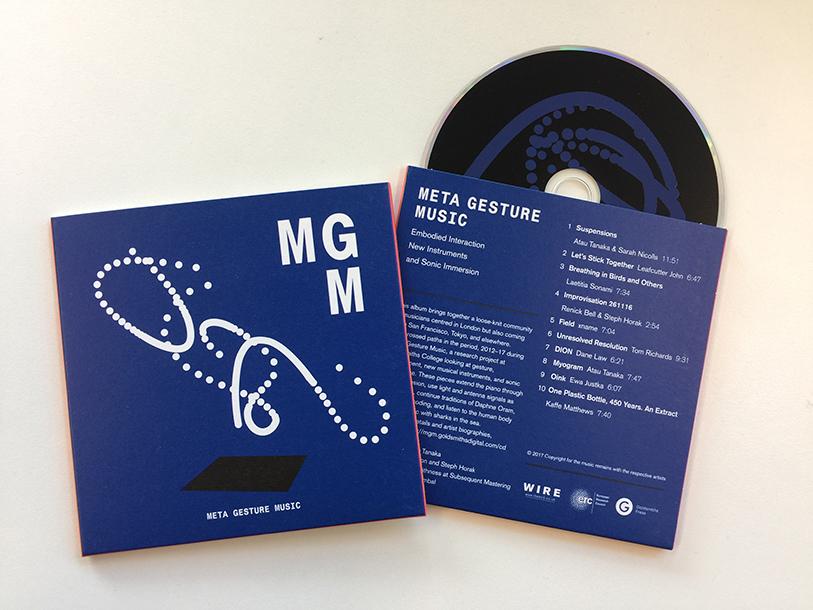 Meta Gesture Music: Embodied Interaction, New Instruments and Sonic Immersion, is a CD anthology featuring musicians who crossed paths during Meta Gesture Music, a European research project which ran between 2012–17 at Goldsmiths that explored gesture in musical performance and the engagement of the human body with sound.

Listen to the CD on digital streaming services here

1. Atau Tanaka & Sarah Nicolls: Suspensions. A muscle sensing interface captures the pianist's gesture, and uses granular synthesis to realise the dream of shaping pianistic timbre after striking a note, for it to sustain to infinity.

3. Laetitia Sonami: Breathing in Birds and Others. The Spring Spyre is comprised of a found object, hacked fader box and audio pick-ups from reverb tanks. Thin springs generate audio, analysed by machine learning, but are ultimately chaotic. The piece explores unpredictability and fluidity, akin to smoke volutes disturbed by air.

4. Renick Bell & Steph Horak combine live coded beats with effects pedal-driven vocals. Their sound drifts to and fro between chaos and order as the beats and melodies stumble to coalesce.

10. Kaffe Matthews: One Plastic Bottle, 450 years. An Extract is based on recordings from the Galapagos Islands where the artist dived with, recorded underwater and filmed hammerhead sharks. Traces of six sharks play 6 digital oscillators mixed with underwater recordings.

Titles in the Sonics series include: Sonic Agency: Sounds and Emergent Forms of Resistance by Brandon LeBelle and Inflamed Invisible by David Toop