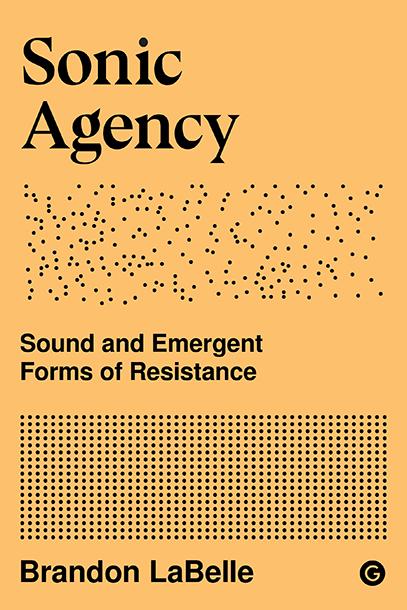 In a world dominated by the visual, could contemporary resistance be auditory? Sonic Agency highlights sound’s invisible, disruptive, and affective qualities, and asks whether the unseen nature of sound can support a political transformation. In this timely and important book, author Brandon LaBelle sets out to engage contemporary social and political crises by way of sonic thought and imagination. He divides sound’s functions into four figures of resistance – the invisible, the overheard, the itinerant and the weak – and argues for their role in creating alternative “unlikely publics” in which to foster mutuality and dissent. He highlights existing sonic cultures and social initiatives that utilize or deploy sound and listening to address conflict, and points to their work as models for a wider movement. By examining the experience of listening and being heard, LaBelle illuminates a path from the margins toward hope, citizenship, and vibrancy. When the current climate has left many feeling they have lost their voice, it may be sound itself which restores it to them.

With poignant examples, philosophical acumen and palpable care, Sonic Agency probes the depth of sound in social life for what it can humanly (and nonhumanly) do, helping readers understand the politics of the always audible but rarely heard.

Sonic Agency presents a passionate attempt at thinking through questions of the emergence of publics and counterpublics – of coming together in a world that isolates us.

LaBelle is correct to stress that the public sphere is usually imagined and understood in relation to visibility, and far less often in relation to sound. Sound offers a way into thinking about who and what is unseen, and appears, on the surface, to offer a more radical, if harder to grasp conception of what insurrectionary politics might look, or rather sound, like.

The broad set of references and overlapping thematics make Sonic Agency rich and intellectually accessible. Having again read LaBelle’s Acoustic Territories recently, it is fascinating to see how Sonic Agency, clearly entwined with LaBelle’s anarchist and non-violent politics and ethics, not only takes up and expounds upon a few of the ideas briefly mentioned in the former but also acts as an enriching theoretical companion to the earlier book’s more socio-historical focus

Brandon LaBelle is Professor of New Media in the Faculty of Fine Art, Music, and Design at the University of Bergen, Norway. His research and work has for many years concentrated on auditory concepts and materiality as the basis for constituting a self-organized and open culture, resulting in a range of artistic, theoretical, and collaborative initiatives.

Other titles include Inflamed Invisible: Collected Writings on Art and Sound 1976 - 2018 by David Toop