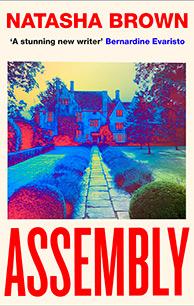 Come of age in the credit crunch. Be civil in a hostile environment. Step out into a world of Go Home vans. Go to Oxbridge, get an education, start a career. Do all the right things. Buy a flat. Buy art. Buy a sort of happiness. But above all, keep your head down. Keep quiet. And keep going.

The narrator of 'Assembly' is a Black British woman. She is preparing to attend a lavish garden party at her boyfriend's family estate, set deep in the English countryside. At the same time, she is considering the carefully assembled pieces of herself. As the minutes tick down and the future beckons, she can't escape the question: is it time to take it all apart?

'Assembly' is a story about the stories we live within - those of race and class, safety and freedom, winners and losers. And it is about one woman daring to take control of her own story, even at the cost of her life.

Natasha Brown has worked in the financial services for the last ten years and studied Maths at Cambridge University. She developed 'Assembly' after receiving a 2019 London Writers Award in the literary fiction category and lives in London.

Natasha Brown’s debut novel is a small but blistering take on the British elite and its poisonous relationship with immigration, work and sexual politics. Within a 100 neat pages, this non-linear, stream-of-consciousness narrative follows a young black woman who has invested everything in transcending her race, class and gender to attain a high-paid position in a cut-throat bank. She is even invited to share her success story with eager young women at a school assembly.

So why does her life feel so unbearable? What comes next? And do her achievements represent progress?

At a certain point, the story falls away and the narrator steps forward to express her frustration with the toxicity of the novel itself — a white, bourgeois form that rewards indirection, subtlety, and subtext. But all that assumes a great many shared assumptions on the part of the readers - an ability to read between someone else’s lines. So how do you write from outside that white bourgeois world while still writing within the novel form? And is the narrator doomed to be “what we’ve always been to the empire: pure, fucking profit”?