In recent years movements like Occupy have caught the radical imagination in Europe and the US – movements that resist neo-liberalism from outside the state, both politically and socio-economically. A much more minor theme in the study of politics (developed especially in relation to global governance), is ‘mainstreaming’ (gender, human rights, humanitarianism), its advantages and pitfalls. What is missing is debate on the relationship between radical, grassroots mobilisations and the possibilities of transforming access to and control over state resources of force and legitimacy.

In this conference we focus on Latin America where the ‘pink tide’ offers many opportunities to learn about the relationship between radicalism and reform. It is surely a mixed picture. The way in which radical movements can be co-opted once they begin to work with state officials and politicians is a possibility that has been realised in at least some cases (the Workers’ Party in Brazil for example). But in principle radical movements may also alter how ‘the centre’ is conceived and positioned (the Chilean students’ movement may be unfolding in this way). Social movements and their relationships to parties, NGOs and the state; the role of different forms of media in facilitating mobilisations, in acting as a ‘fourth estate’ and in changing ‘commonsense’; reform of government policy; and reform of state-society relations through constitution-making and the judiciary - all these aspects of radicalism and reform will be on the agenda for this conference.

12.15-1.15pm Media concentration and protest
Carla Moscoso – The Chilean student movement: between the criminalisation of the media and the institutionalisation of a new 'common sense’
Alvaro Sanchez, Charge d’Affaires, Embassy of Venezuela – Telesur: an Alternative to Media Concentration and the Project to Integrate Latin America 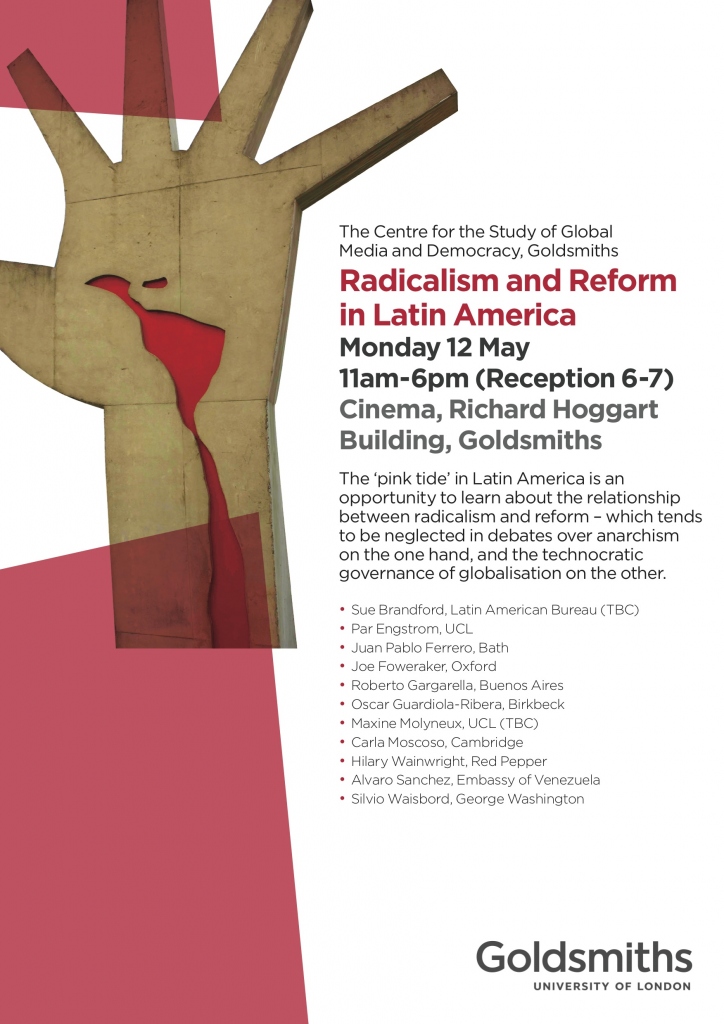