Composer, songwriter, winner of Ivor Novello Award, and Goldsmiths alumna Errollyn Wallen gives a talk on being a composer.

Drawing on her experience since graduating with a music degree from Goldsmiths in 1981, Errollyn Wallen will give a talk about the experience and realities of making a living as a composer in the UK in the 21st Century.

Errollyn Wallen is an award winning composer and lyricist. She was made an MBE for her services to music in 2007 and was the first black woman to have her work performed at the proms. In May 2013 she was awarded the Ivor Novello Award for Classical Music, the first woman to receive the award.

Her works include symphonies, ballets, operas and chamber music. Recent large-scale commissions include two works featuring the London Symphony Orchestra for the opening ceremony of the London 2012 Paralympic Games – PRINCIPIA, for massed choirs and orchestra, and Spirit in Motion, for soprano and orchestra. Other recent works include Diamond Greenwich for the Queen’s Diamond Jubilee, One Night, BBC drama series (winner of the 2013 FIPA d’Or for Best Music for a Television Series) and her hit opera for children, Cautionary Tales (commissioned by Opera North).

She is currently working on her fourteenth opera –a collaboration with David Pountney and had three operas performed in July 2014 –ANON for Welsh National Opera, Cakehead for Tête à Tête festival and Cautionary Tales in her own new production. Are You Worried About the Rising Cost of Funerals? (Five Simple Songs) performed by Mr. McFall’s Chamber with Susan Hamilton (soprano) was part of the PRSF New Music Biennial 2014, broadcast on BBC Radio 3 and released on NMC. Her music was played in outer space on the NASA STS-115 mission.

These talks are free and open to all to observe 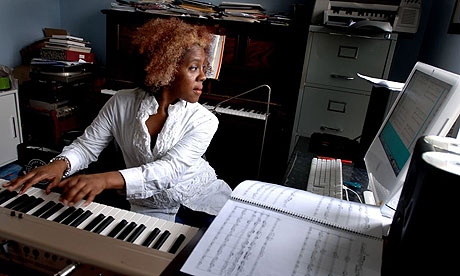