This event will be followed by a seminar at Whitechapel Gallery on 2nd October, 2.00-5.00pm. Please get in touch with Nicole Wolf (n.wolf@gold.ac.uk) if you would like to join as places are limited.

The Festival of Arts. Shiraz-Persepolis introduced voices from Asia and Africa into international cultural discourse and juxtaposed them with avant-garde experiments in the immediate aftermath of decolonisation. It was a Third World 'writing back' that shifted the international center of gravity towards a cultural production and politics with a focus on the present and the re-emergent other.

The Festival of Arts was held in and around the city of Shiraz and the ancient ruins of Persepolis, every summer from 1967–1977. It featured artists including: Ravi Shankar, John Cage, Karlheinz Stockhausen, National Ballet of Senegal, Rwanda Drum Ensemble, Balinese Gamelan musicians and dancers, Shuji Terayama, Shanta Rao, Peter Brook, Andrei Serban, Robert Wilson, Robert Serumaga and many more leading directors, musicians and performers. The festival was brought to an end with the Iranian revolution after it was declared decadent by religious decree. Its archives and documents have remained banned in Iran since 1979.

The rhetoric of the festival returned regularly to the theme of universalism and the dream of unity, looking to expand the area of overlapping community between the colonialist and formerly colonized societies. This universalist model rejected reductionist principles of a homogenizing global culture. It focused, conversely, on achieving a unity of disunities through a fertile dialectic between values of permanence and change, the eternal and the new.

Vali Mahlouji is an independent curator and writer and advisor to the British Museum on its modern/contemporary Iranian collections. Mahlouji’s recent curatorial work includes exhibitions at FOAM (Amsterdam), Musée d’Art Moderne de la Ville de Paris, MAXXI National Museum of XXI Century Arts, Whitechapel Gallery and Photo London. He is founder of the research and curatorial platform Archaeology of the Final Decade, which investigates, conserves and recirculates into cultural memory areas of art and culture that have remained obscure, under-exposed, over-looked or in some cases destroyed. Mahlouji has been published by Photo London, Encyclopædia Iranica; Asia Society Museum, New York; The Abraaj Group Art Prize, Dubai; Darat al Funun, Amman; and Sharjah Biennial, among many other institutions and media. His new titles – Prostitute 1975-77 and Perspectives on the Festival of Arts, Shiraz-Persepolis - are being published by Thames & Hudson and Black Dog Publishing. http://valimahlouji.com/

Anna Furse is a theatre director, writer and Professor in Theatre and Performance. She is the Director of the international MA in Performance Making, co-Director of The Centre of the Body and founder and curator of The Performance Research Forum. She founded her own production company Athletes of the Heart in 2003. Her work as a Theatre Director, researcher and teacher focuses on the body as a scenographic tool, ensemble practice and on the communicative power of sparse, functional aesthetics. http://www.gold.ac.uk/theatre-performance/staff/academic/a-furse/

Ola Johansson is Associate Professor in Contemporary Performance Practice at Centre for Research into Creation of Performing Arts (ResCen), Middlesex University. He has taught and conducted conceptual and practice-led research in applied performance around the world. Along with works of performance and video art, he has published the books, Community Theatre and AIDS (2011) and Performance and Philosophy: Interdisciplinary Approaches to the Performing Arts (2008). Johansson has worked as a theatre critic and documentary filmmaker and has recently staged two theatre productions on democracy: Politico (2014) and Beyond Vice (2013). His next book will deal with the democratic links between applied theatre, performance art, pedagogy and activism. http://www.mdx.ac.uk/about-us/our-people/staff-directory/johansson-ola

Elvira Dyangani-Ose is Lecturer in Visual Cultures at Goldsmiths College, University of London and curator of the 2015 Göteborg International Biennial for Contemporary Art. Between 2011–2014, She was Curator of International Art at Tate Modern, where she assumed a leading role in developing the museum’s holdings of art from Africa and its diaspora. Previously, she was curator at the Centro Atlántico de Arte Moderno (2004–2006) and the Centro Andaluz de Arte Contemporáneo (2006–2008). While at Tate, Dyangani-Ose was responsible for Across the Board (2012–2014), a two-year interdisciplinary project that took place in London, Accra, Douala, and Lagos. She was the Artistic Director of the third edition of the Recontres Picha Lubumbashi Biennial in 2013. Further details of Dyangani-Ose's recent curatorial work can be found at: http://www.gold.ac.uk/visual-cultures/staff/dyanganioseelvira/. 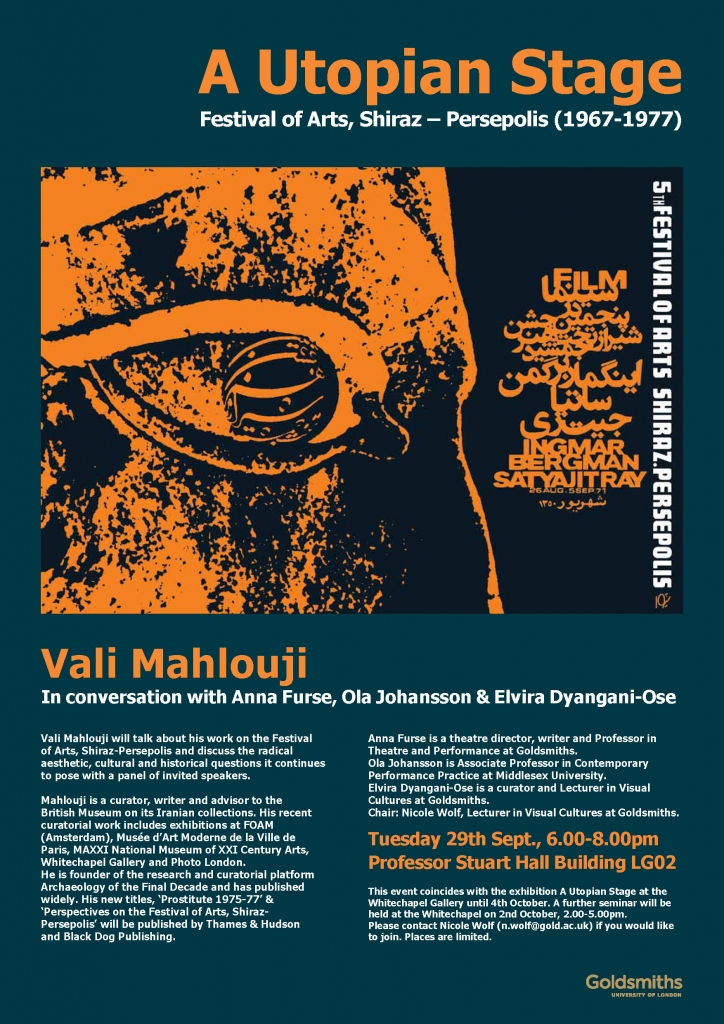