Migrating Dreams and Nightmares: Materials and Movement takes its conceptual and methodological inspiration from John Berger and Jean Mohr's classic A Seventh Man (1975). In this book, Berger and Mohr cite a migrant worker: 'A friend came to see me in a dream. From far away. And I asked him in the dream: "Did you come by photograph or train?"' In these simple sentences, Berger and Mohr identify a complex web of conscious and nonconscious, bodily, visceral, emotional and affective expressions of migration. This is what Migrating Dreams and Nightmares aims to explore through a series of events and an exhibition.

It asks, firstly, after the myriad ways in which dreams and hopes, horrors and nightmares are enfolded into experiences of migration; and, secondly, how migration dreams and nightmares are translated and transformed through their movement (their migration) through and across a variety of media and materials. How does the voice, the photograph, the prayer, the letter, give flesh differently to experiences of migration? What kinds of methodological issues are raised when, as researchers, we work with 'the same' theme (migration) across different materials and forge collaborations with different kinds of practitioners?

Is the author of Night Haunts: A Journey Through The London Night (winner of 2008 DH Lawrence International Prize For Travel Writing). He makes radio documentaries for the BBC, runs the Colloquium for Unpopular Culture at New York University, and is a film critic (he was named Critic of the Year at the British Press Awards in 2005). His writings have appeared in a number of publications including the London Review of Books, Suddeutsche Zeitung, Du, The Wire, Sight and Sound, Bidoun, Gastronomica, The Australian, Modernism/ Modernity, New York, The Guardian, Times Literary Supplement.

Is the film director of I is For India, a film memoir based on years of transnational cine film letters exchanged between her father in India and his parental home in India during a long duration of separation. She has worked on a wide range of international and local NGOs before running the Film Unit at Oxfam GB for three years. Suri has a strong interest in participatory film.

Is Director of the OpenSpace Research Centre.  Her books include Gendered migration and global social reproduction with Kofman, E (2015). She has co-authored Gender and International Migration in Europe (2000) and The Practice of Cultural Studies (2004) and co-edited Tracing Indian Diasporas: Contexts, Memories, Representations (2008) & South Asian Women in the Diaspora (2003, with N. Puwar).

Her art work fills the exhibition space of Migrating Dreams + Nightmares at Goldsmiths. Previously she worked with the Methods Lab on the AHRC project Noise of the Past and Cinema III. She works predominantly in the medium of painting and sculpture, but has worked on large scale installations. Her work is concerned with the cyclical nature of time often with focus on the points of intersection between painting, sculpture, and spatial analysis. She has recently had work exhibited with The Well Made Project, London and The Art of Caring Project in association with Kingston University.

Is an artistic film maker. She has collaborated with the Methods Lab for Migrating Dreams + Nightmares by installing her new film On a Wing and a Prayer on the shelves of the Stuart Hall Library. The film is inspired by the story  of Abdul Rahman Haroun, who walked through the channel tunnel. Syed’s films have been shown internationally, including BBC Arts Online; The Triangle Space; Los Angeles County Museum of Art; 5th Moscow Biennale; Museum of Modern Art; Museo National Centro de Arte Reina Sofia; XV Sydney Biennale; Hayward Gallery; Tate Britain; and Tate Modern, London.

Words and images from A Seventh Man, which was translated into different languages, have been re-enacted in the Kingsway Corridor by the artist Antoinette Brown, in collaboration with Nirmal Puwar. Chalk, blackboards and wire jolt the words out of the book and onto the walls of the academy. Contemporary graffiti from Larache’s harbour sits amongst selections from the book. In addition, Sadek Rahim’s sponge boats from his project No Crash! Boom! Bang!, originally installed in the Bibliothèque Nationale d'Alger, hang in the arches of the passageway.

In a linked-in off-site exhibition in the Stuart Hall Library Alia Syed and Nadia Perrotta have responded to Berger and Mohr’s book and Syed’s longstanding interest in tunnels to examine the hopes and fears driving the movements of current migrants and refugees. 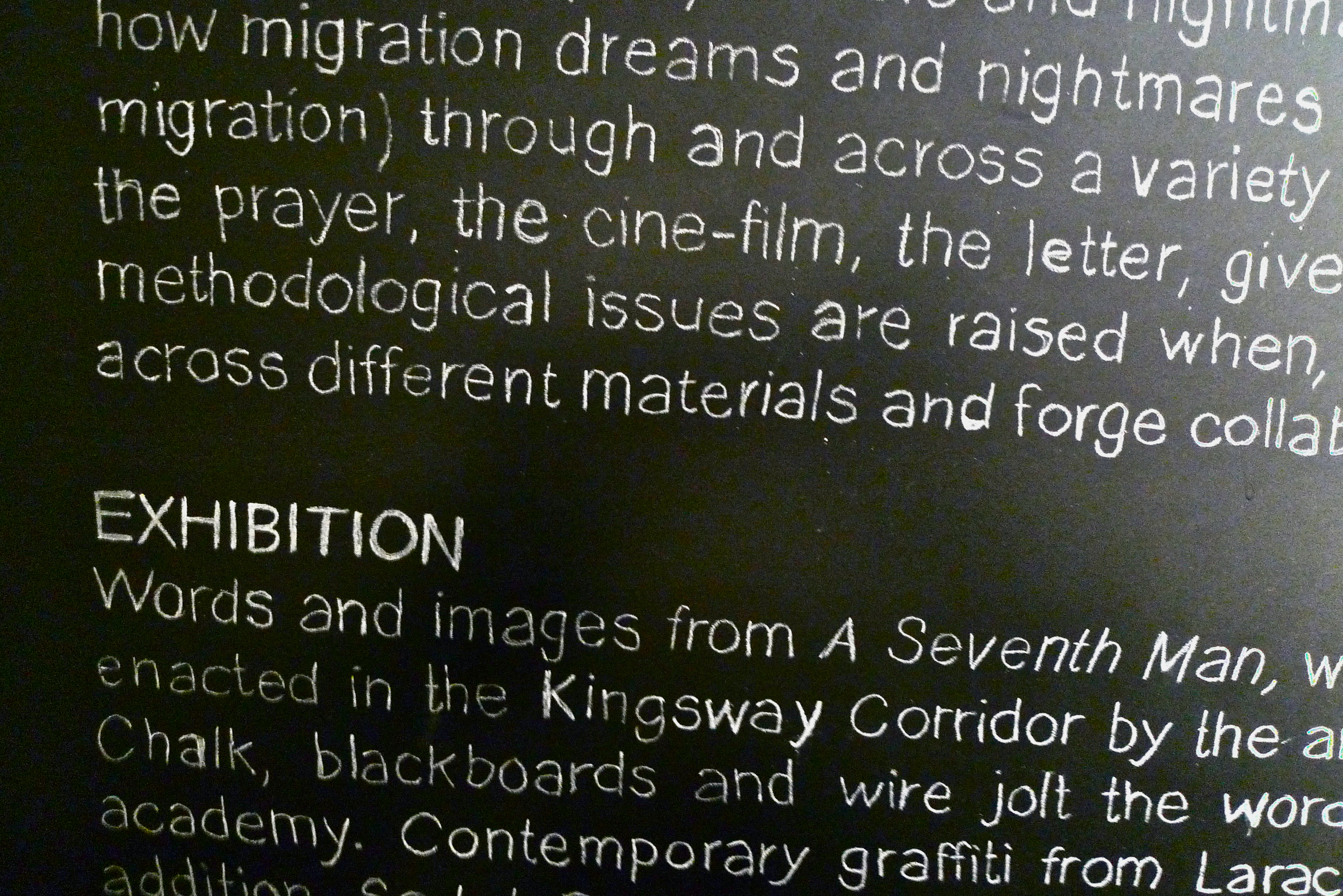 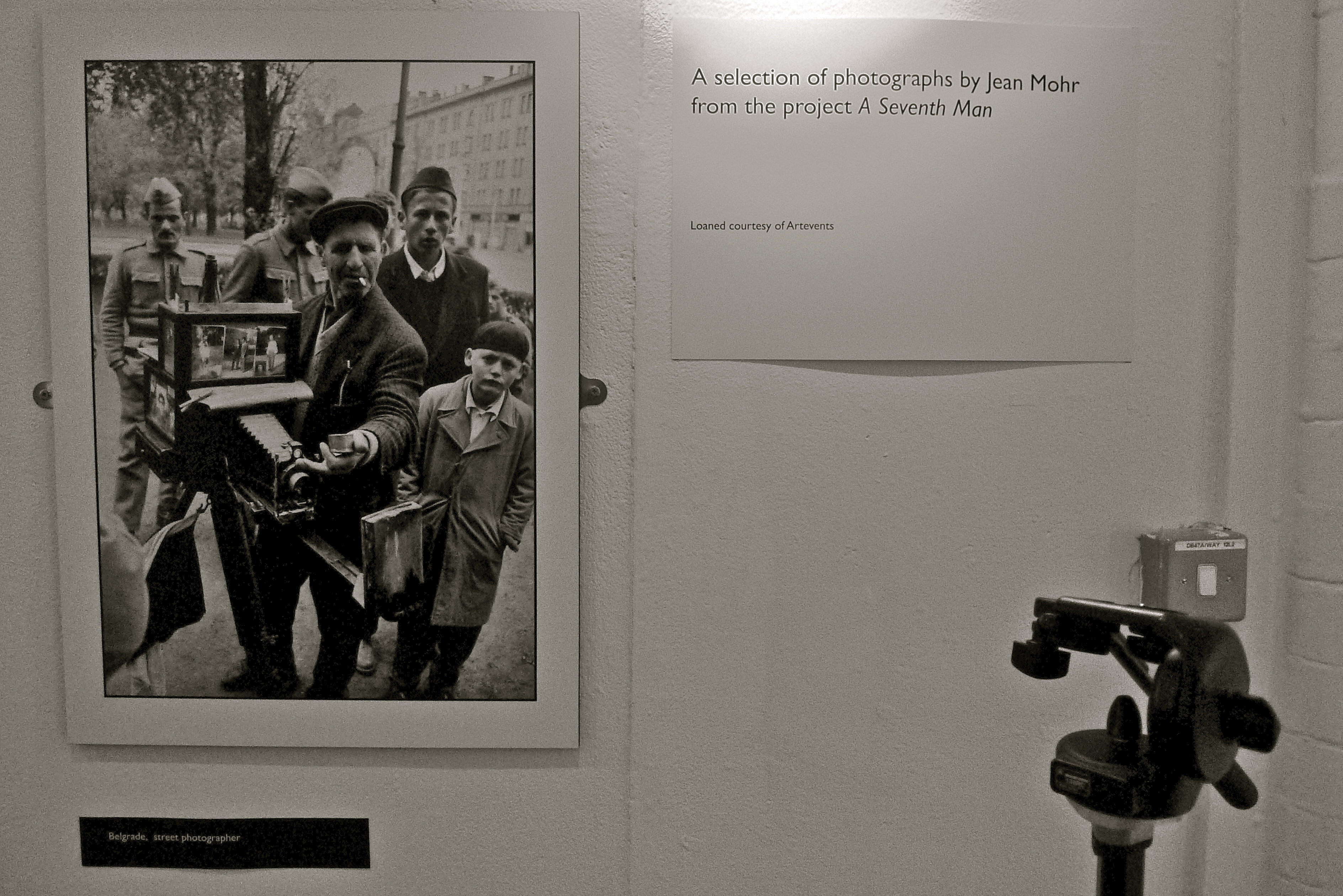 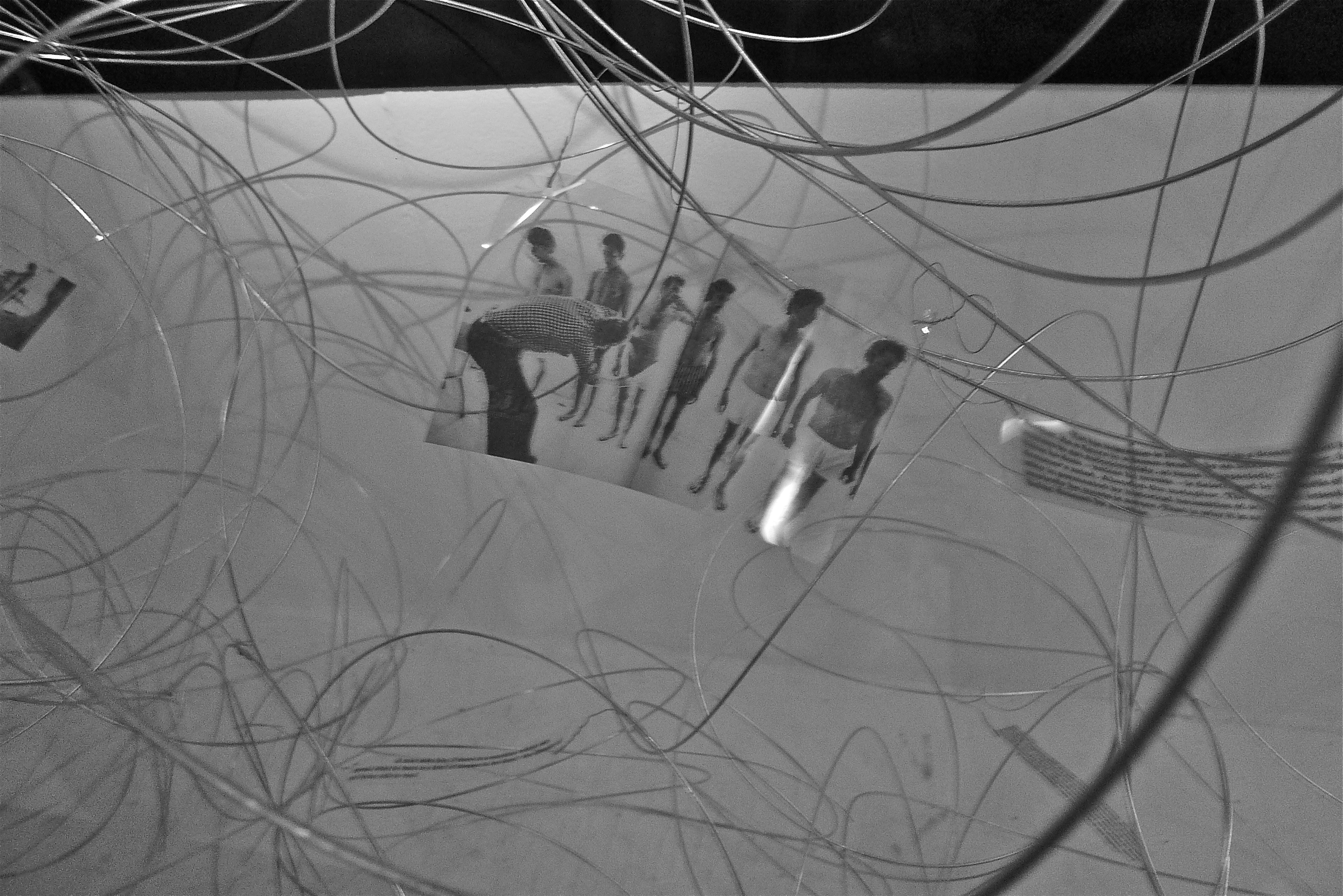 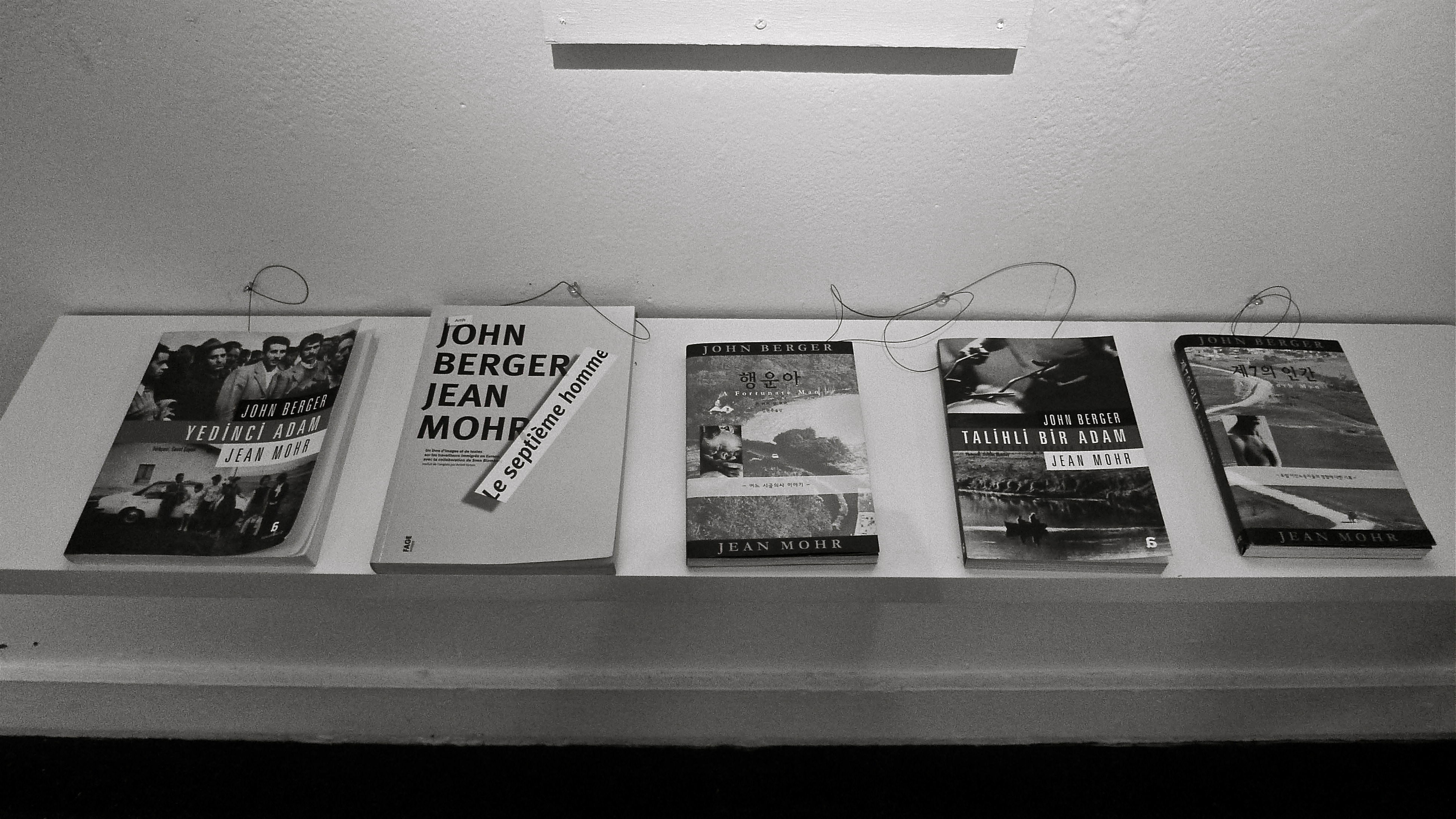 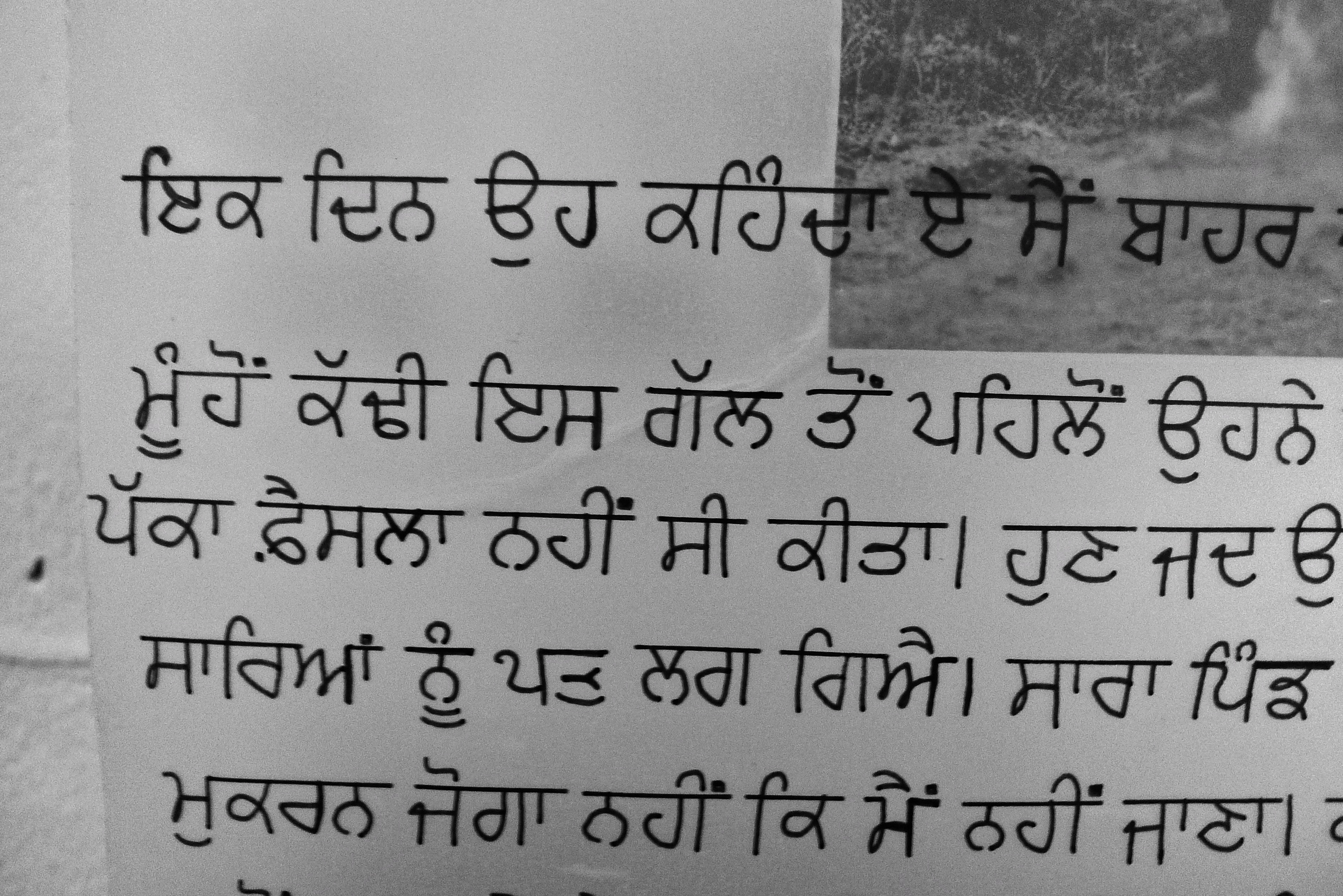 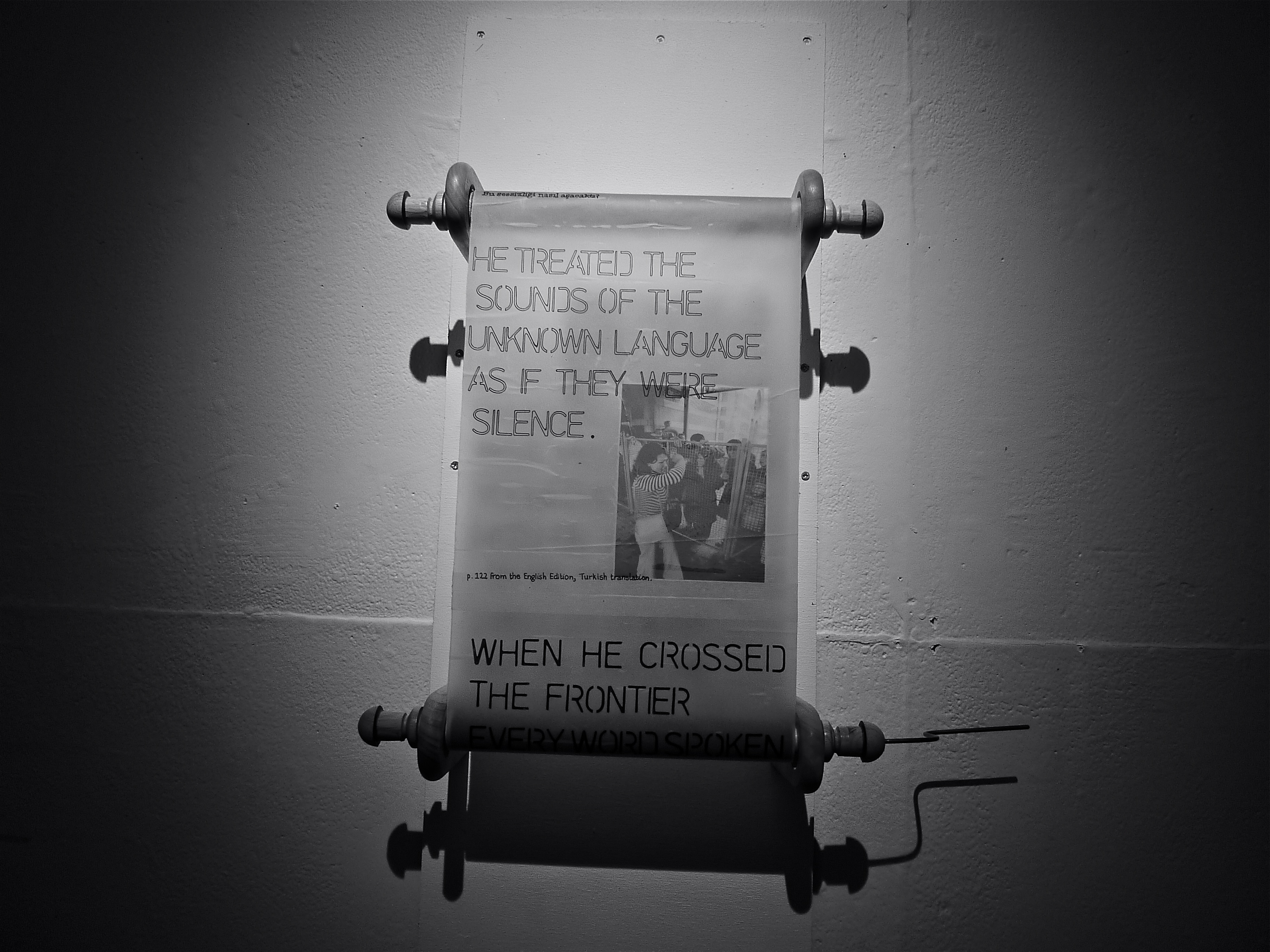 Photos from the event below 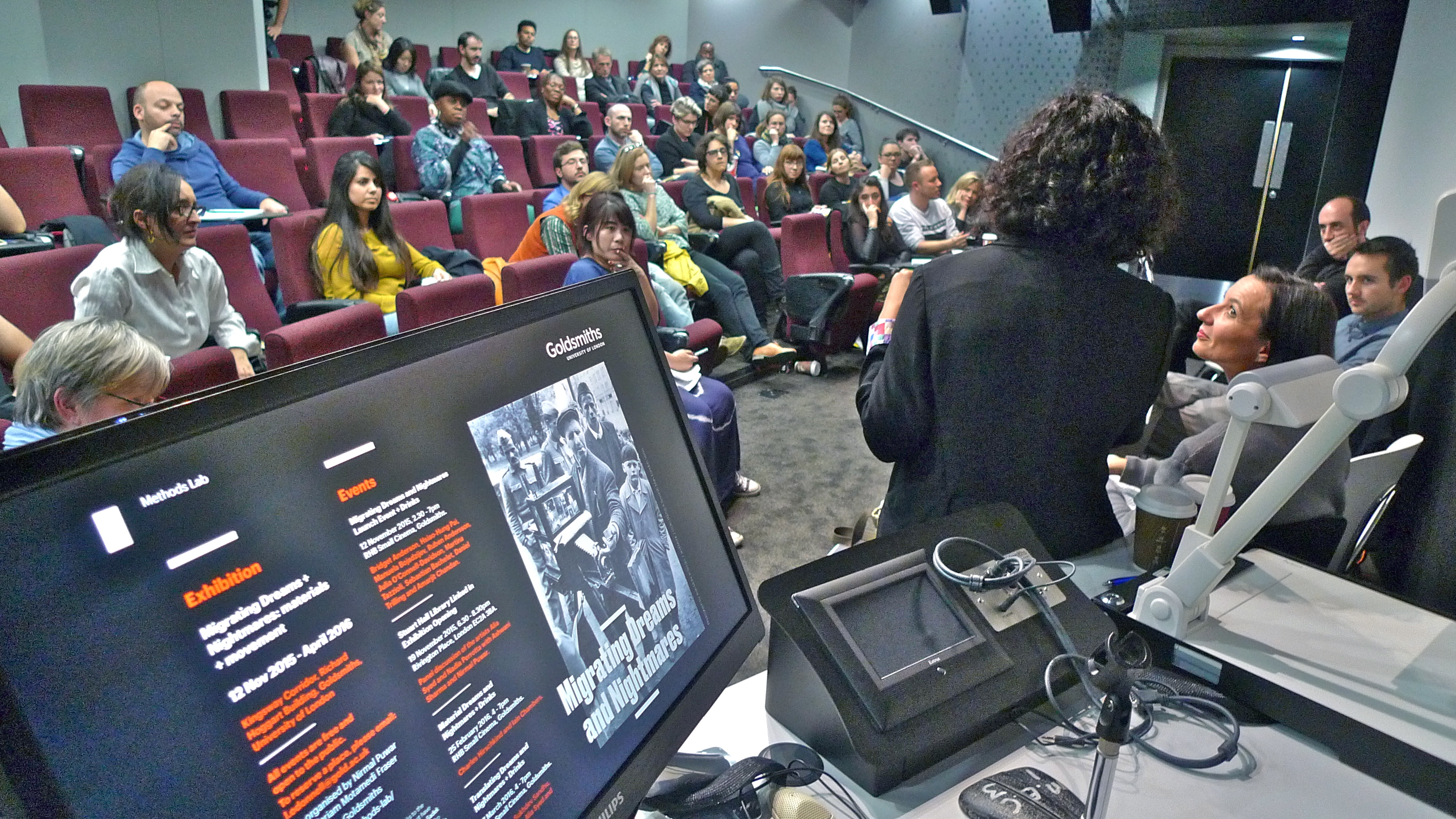 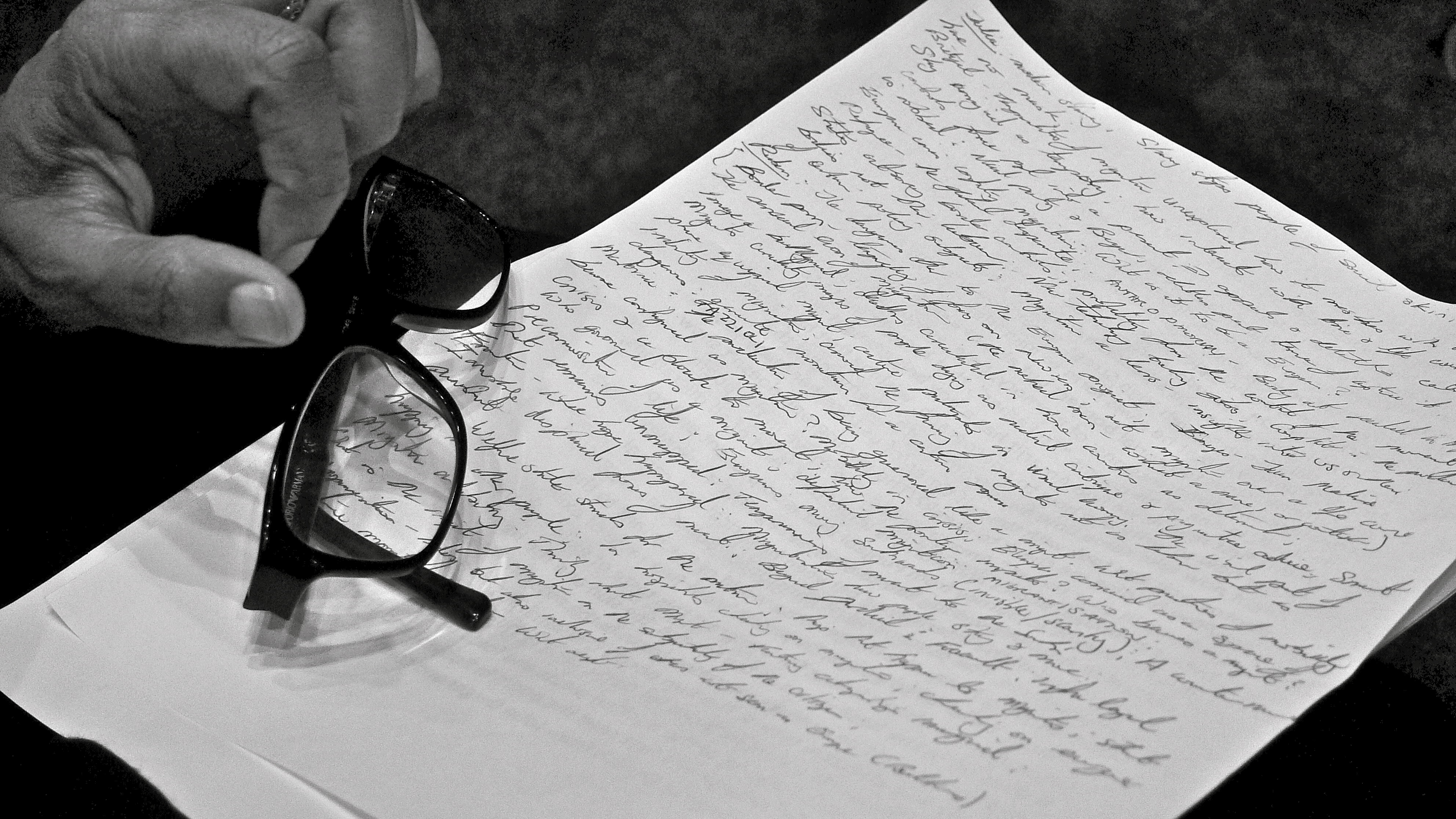 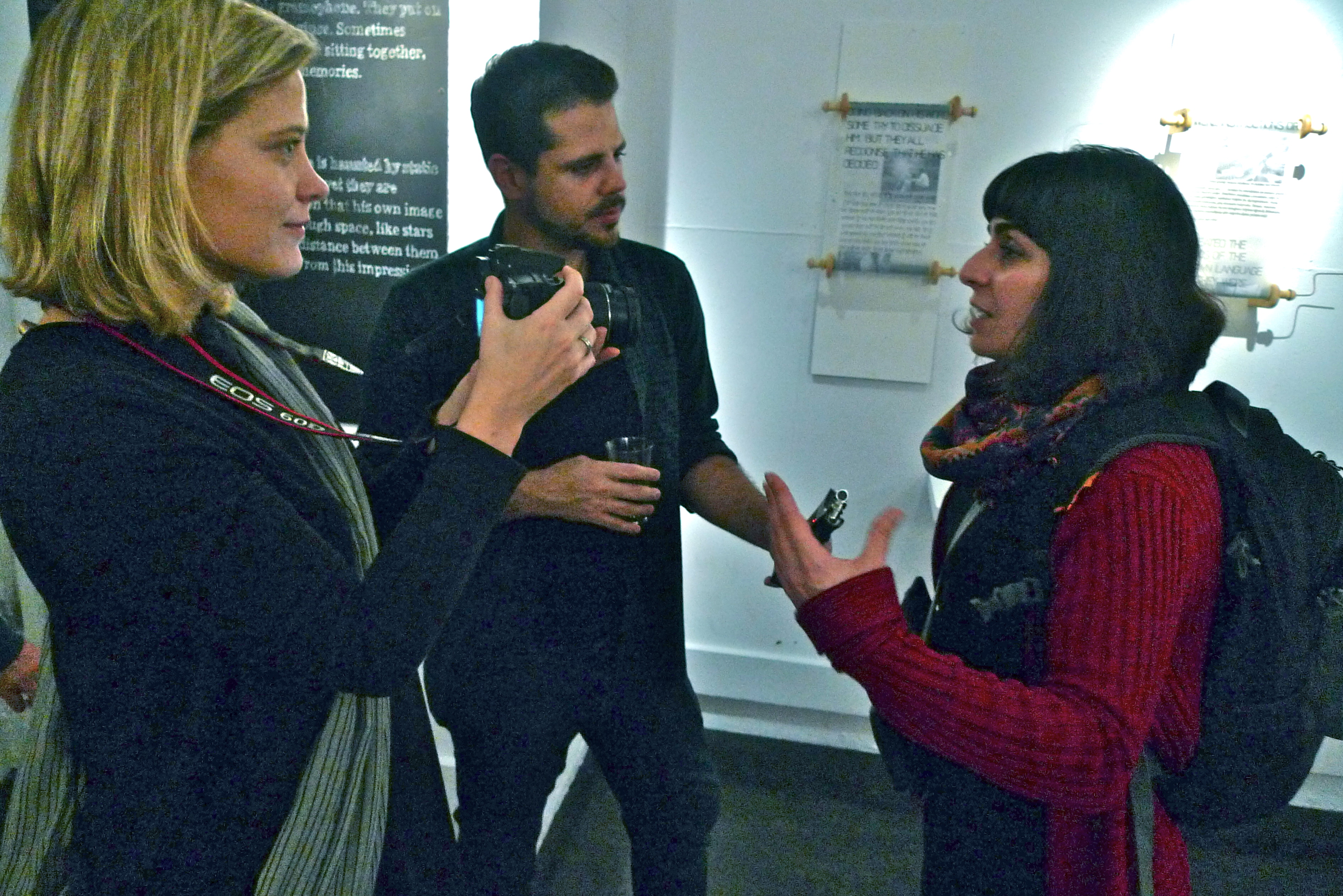 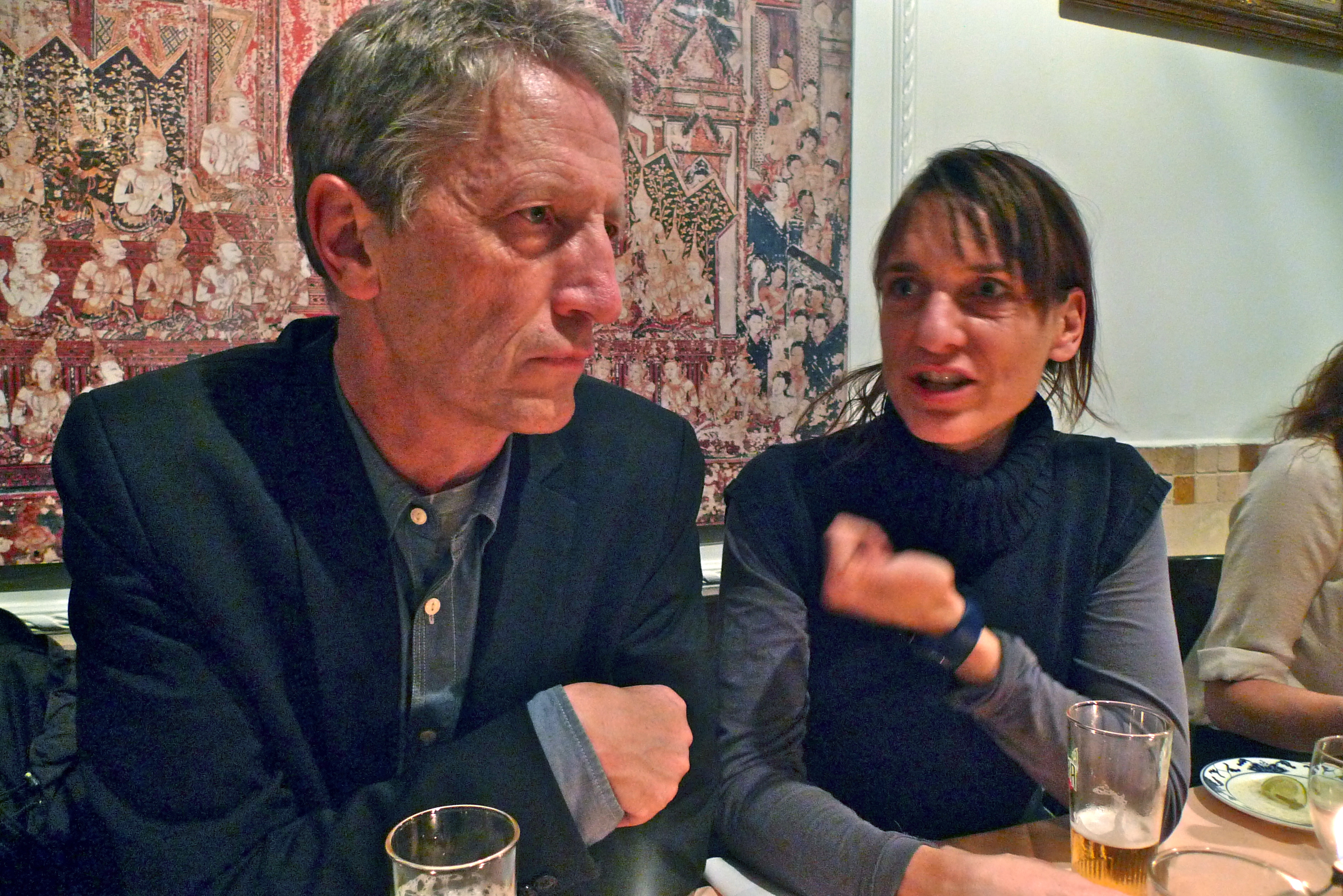 This was a panel discussion to mark the opening of Alia Syed and Nadia Perrotta’s exhibition on contemporary migration.

Read/hear from the event via the Iniva Blog.

Material Dreams and Nightmares: A seminar with Charles Hirschkind and Iain Chambers

From the publication of Washington Irving’s Tales of Alhambra, in 1823, up through today, Granada has been a highly celebrated destination for travelers and tourists, drawn by the sublimity of its romantic oriental splendor. Yet, although the city is well known for the orientalist fantasy it puts on display for touristic consumption, here I want to consider forms of reflection that cannot be encompassed within the protocols of discourse and experience mobilized by the tourist industry, and that indeed, may challenge those protocols and the assumptions about history and geography they entail. Specifically, drawing on the works of writers, thinkers, and poets from the mid-19th century to the present, I trace a tradition of reflection that engages the city’s unique sensory and architectural configuration as the basis from which to reassess Spain’s relation to Islam, North Africa, and the Middle East. I conclude the talk with some general observations on the way the sensory and material infrastructure of Moorish Spain mediates and conditions the possibilities of finding a place for Islam in the country today.

This commences from the implicit critique of the juridical structures of legalised citizenship posed by the contemporary migrant in the planetary context of a migrating modernity. Here lies the nightmare and heart of darkness of Occidental ‘democracy’ that has historically and structurally required the negation of rights, freedoms and democracy to others in order to exercise its rights. From these premises I will then move to consider understandings of belonging secured in the informal urban languages of sounds, images and words, and their ways of seeing, receiving and reworking the world.

With grateful thanks to the people without whom this project would not have materialised.

To the artists: Antoinette Brown, Sadek Rahim, Alia Syed. To those who helped with the translations: Imran Ayata and Manuela Bojadzijev, Amarjit Chandan, Gilles Fage (Fage éditions and Nouvelles éditions Scala), Duran Kim (Duran Kim agency) and Teresa Pintó (Agencia Literaria). Thanks also to Nick Brown (Stuart Hall Library), to Di Robson and Gareth Evans (Artevents) for their loan of Mohr's photographs, and to Jean Mohr and John Berger for granting us the liberty to re-shuffle the text and images. Thanks to the Sociology Department, the Research Office at Goldsmiths, the Women's Art Library and the journal Sociological Review for financing the project.