Goldsmiths played host to an exciting and innovative workshop focusing on Immersive Art & Tech this summer. The UK, as a global leader in the creative industry with London and the hub of numerous companies in the area of video games, films and TV, together with Goldsmiths and its rich global reputation in creative industries and strong international links with China, acted as the perfect host for this cutting-edge workshop. This one-day workshop at Goldsmiths was supported by presentations, panel discussions, and demos.

More information can be found on the project website.

21 February 2018 - Peter Nolan : China and the West: Crossroads of Civilisation

Peter Nolan holds the Chong Hua Chair (Emeritus) in Chinese Development and is the Founding Director of the University’s Centre of Development Studies, University of Cambridge. He is the Director of the Chinese Executive Leadership Programme (CELP). He is Director of the China Centre, Jesus College. The Financial Times commented: ‘Nolan knows more about Chinese companies and their international competition than anyone else on earth, including in China’. He has spoken at the Chinese Government’s annual China Development Forum since its inception in 2000. He was a member of the UK Government’s Asia Task Force and the China Council of the World Economic Forum. He holds an honorary doctorate from the Copenhagen Business School. In 2009 he was awarded the CBE (Commander of the British Empire) ‘for services supporting China’s integration into the global economy’.

Barley Norton and Naomi Matsumoto and the contributors of the chapters will launch their new edited volume, Music as Heritage: Historical and Ethnographic Perspectives. The event will include a short concert by Rica Narimoto (Aichi University of Arts, Japan, the author of Chapter 12), and David Hughes (SOAS, the author of Chapter 7) and the SOAS Min'yō Group which he founded.

Rica will perform her own composition, Six Pieces on Matsushima for piano (2011) which is based upon 'Matsushima' of Tokiwazu-bushi from Jōruri, Japan's traditional musical genre, typically used in Kabuki theatre. Songs that the SOAS Min'yō Group will perform come from various regions in Japan and include among others, 'Sōran Bushi' (fishing song), 'Nambu Ushioi Uta' (ox-driving song), 'Tanchamē' (dance song from Okinawa), 'Akita Ondo' (comical rap song), and "Aneko Mo Sa' (sad love song). The group use traditional instruments including the 3-string shamisen 'banjo', the end-blown bamboo flute shakuhachi, the side-blown bamboo flute shinobue, taiko drums and some other percussion, plus the Okinawan sanshin (ancestor of the shamisen). Both the Min'yō and Jōruri genres have been inscribed on the UNESCO's Representative List of the Intangible Cultural Heritage of Humanity

The performances will be followed by a drinks reception.

As economic, technological and cultural change gathers pace across the world, issues of music heritage and sustainability have become ever more pressing. Discourse on intangible cultural heritage has developed in complex ways in recent years, and musical practices have been transformed by safeguarding agendas. Music as Heritage takes stock of these transformations, bringing new ethnographic and historical perspectives to bear on our encounters with music heritage. The volume evaluates the cultural politics, ethics and audiovisual representation of music heritage; the methods and consequences of music transmission across national borders; and the perennial issues of revival, change and innovation.

As part of LGBTQ+ History Month, experience an evening of Asian LGBTQ+ Shorts, which brings six diverse stories from India, Malaysia, Pakistan, Philippines and South Korea. As an emerging film genre, there has been a growing interest in LGBTQ-related stories from Asia. Today, LGBTQ+ filmmakers from Asia are telling their own stories to amplify their narratives in a raw and authentic way without a Western gaze.

21/02/18: Peter Nolan : China and the West: Crossroads of Civilisation 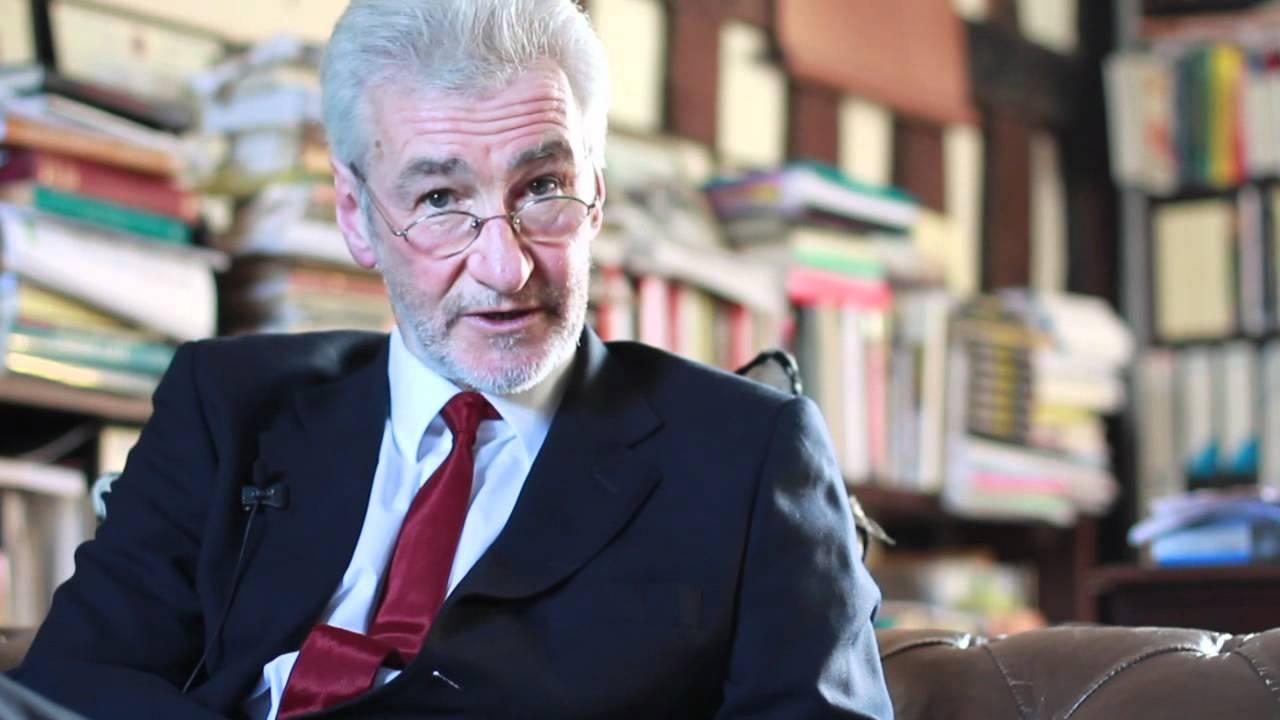 China and the West: Crossroads of Civilisation

Human civilisation stands at a crossroads. There are urgent global challenges that need to be confronted, including destruction of the natural environment; climate change; inequality of income, wealth and life chances; industrial concentration and regulation of the financial system. Looming above all of these is the issue of how to avoid a ‘Clash of Civilisations’ and a New Peloponnesian War. Only by looking deep into the past can one better understand the possible direction that the long-term evolution of world civilisation might take. The relationship between China and the West will play a central role in the path that humanity follows in the decades and centuries ahead. In the Ancient World for around 2,000 years the evolution of civilisation in both China and West followed convergent paths. From the collapse of the Roman Empire in the fourth century AD until the early nineteenth century their paths diverged radically. In this era China continued to build in an evolutionary fashion on the foundations laid in the Ancient world while Europe followed a fundamentally different course from that which had been established in the Ancient world. The long era of the ‘first divergence’ left a deep imprint on the culture of both East and West. The Industrial Revolution in Britain signalled the start of a second era of radical divergence, which lasted up until the late twentieth century. In the long sweep of world history this era is of short duration, a mere 200 years, compared with more than 4,000 years of complex civilisation that preceded it. Since the 1980s the world has entered an era of renewed economic convergence between China and the West. However, there are still deep differences in the respective civilisations, which are inherited from the long sweep of history. These differences have the potential to result in conflict, producing global instability and violence, but they also have the potential to combine in a virtuous fashion that helps to construct a sustainable and peaceful global future for the whole of humanity.

Peter Nolan holds the Chong Hua Chair (Emeritus) in Chinese Development and is the Founding Director of the University’s Centre of Development Studies, University of Cambridge. He is the Director of the Chinese Executive Leadership Programme (CELP). He is Director of the China Centre, Jesus College. The Financial Times commented: ‘Nolan knows more about Chinese companies and their international competition than anyone else on earth, including in China’. He has spoken at the Chinese Government’s annual China Development Forum since its inception in 2000. He was a member of the UK Government’s Asia Task Force and the China Council of the World Economic Forum. He holds an honorary doctorate from the Copenhagen Business School. In 2009 he was awarded the CBE (Commander of the British Empire) ‘for services supporting China’s integration into the global economy’.

Goldsmiths Asia Centre hosted an exciting Q&A session on May 30th, greeting leading figures from some of China's most prestigious institutions and organisations in the fields of performing arts and culture to form a panel and field questions from the audience. The panelists brought with them their knowledge and expertise based on their own case studies, representing institutions such as the Chinese Culture Promotion Society, Chinese National Academy of Arts and Minzu University, as well as including former leading members of Beijing Dance Academy. The panel also presented some stunning Chinese dance performances, from youth performances to a thrilling sword dance performance that left the audience wowed.

The delegation’s visit to UK, and the event held in Goldsmiths, has since been covered by several large Chinese social media accounts on China’s Weibo platform, including one of the leading UK related blogs Yīngguó nàxiē shì er (lit. Those British Things), which has upwards of 6 million followers. Other notable acconts which covered the event included Henan Television’s Dongfang Jinbao (lit. Orient Today), which itself has an impressive following of over 5 million. 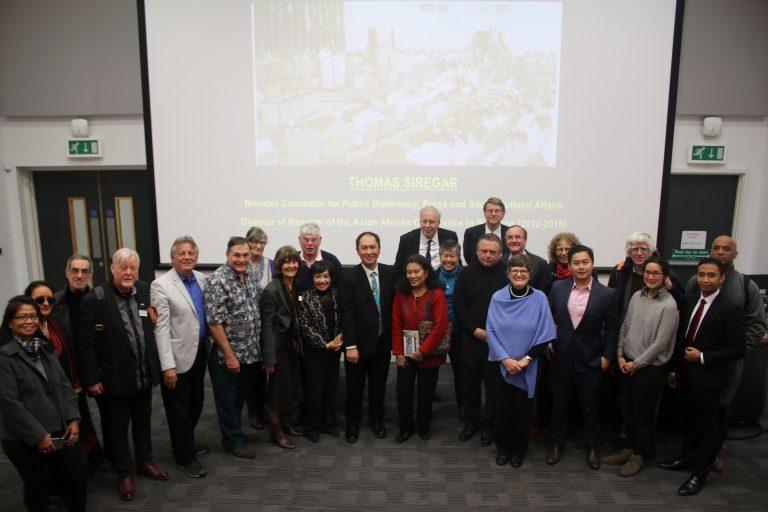 Thomas Siregar of the Indonesian Embassy in London gave a talk at Goldsmiths on 25th April 2017 on the Asian-African Conference that was held in Bandung in 1955, and which led to the foundation of the Non-Aligned Movement. The Asian African Conference involved the renowned leaders of many Asian and African countries, many of which were newly independent. A cultural programme was held alongside the political programme and new forms of formal attire were adopted. The conference led to the creation of the nonaligned movement. Mr Siregar is a former Director of the museum of the conference and he talked about its ongoing legacy. The event was hosted by ICCE and the Asia Centre and the Anglo-Indonesian Society. 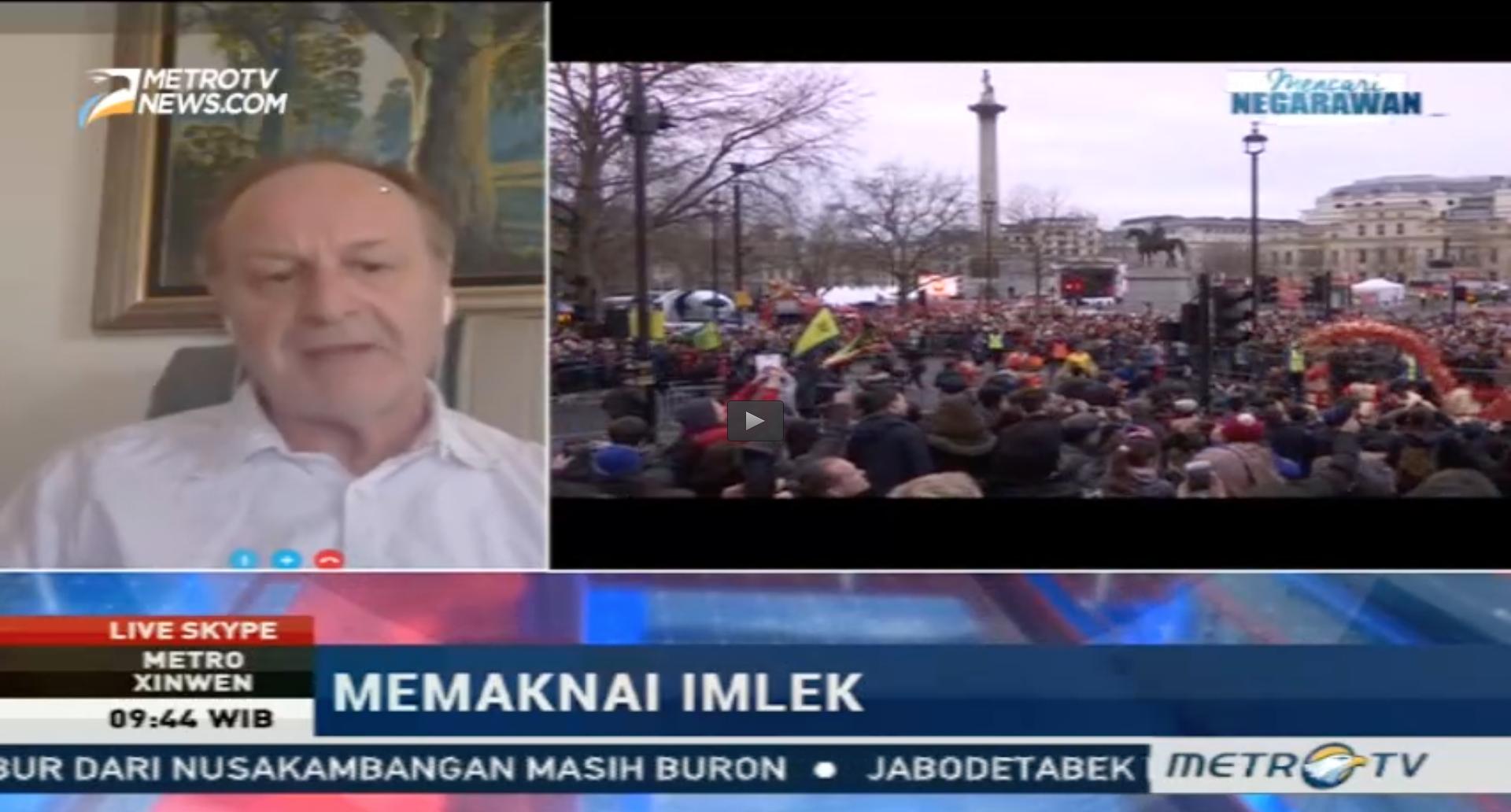 Asia Centre Director Michael Dutton was interviewed on MetroTV News, Indonesia's first 24-hour news channel offering Mandarin news, about how Spring Festival is celebrated in the Western world, and what meaning it has.

This very special screening of the renowned 1964 chinese animation of "Monkey King, Uproar in Heaven" was held at Curzon Cinema in Goldsmiths as part of Gold on Film week.

Completed one year before the outbreak of the Cultural Revolution, the timely-titled Uproar in Heaven (1964) represents both the culmination and the final curtain call of the golden age of Chinese animation.

Professors Chris Berry (Film Studies, King's College) and Michael Dutton (Politics, Goldsmiths) discussed its cultural and artistic relevance of one of the best loved adaptations of "a Journey to the West" and still captivates audiences today. 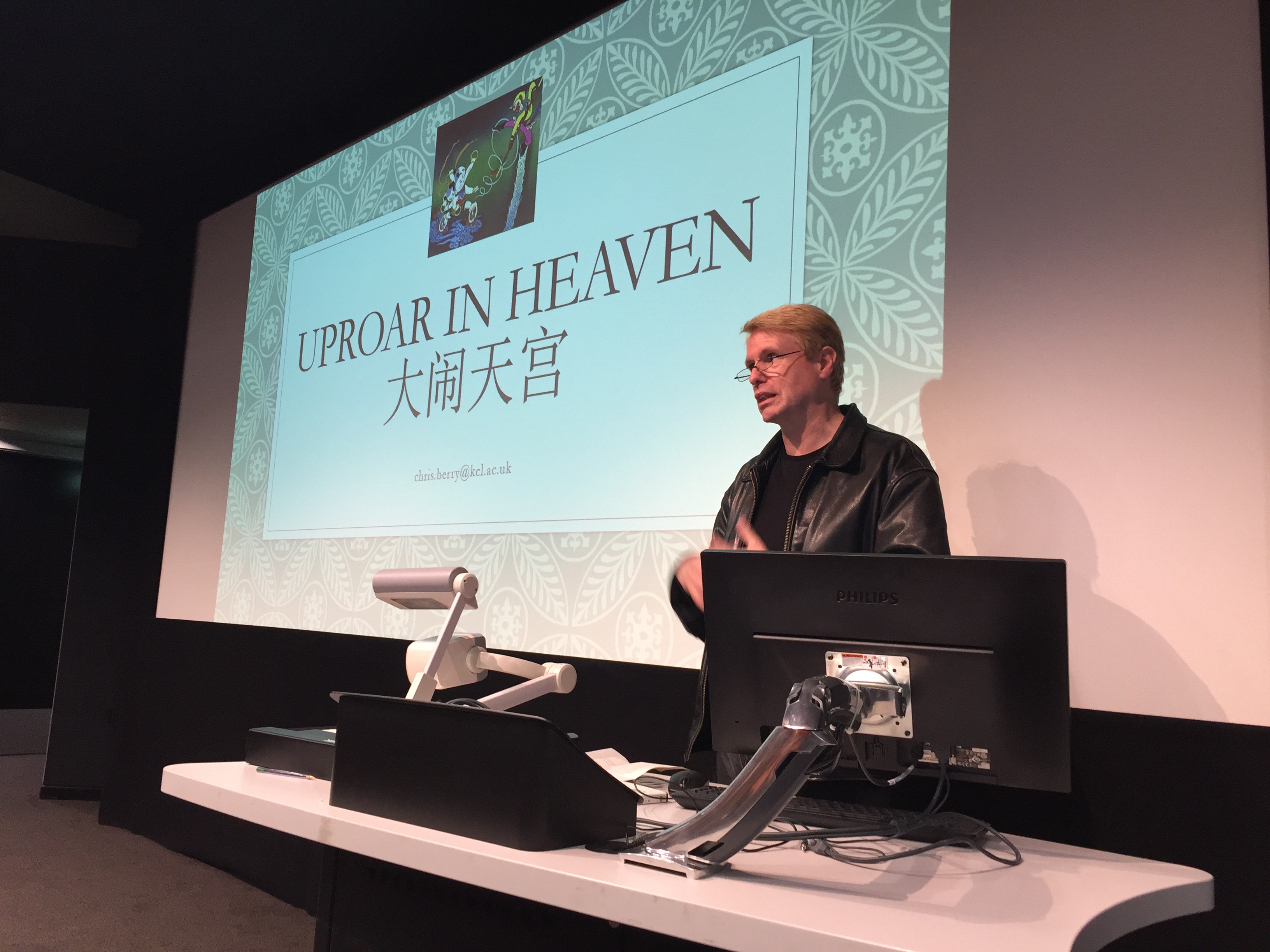 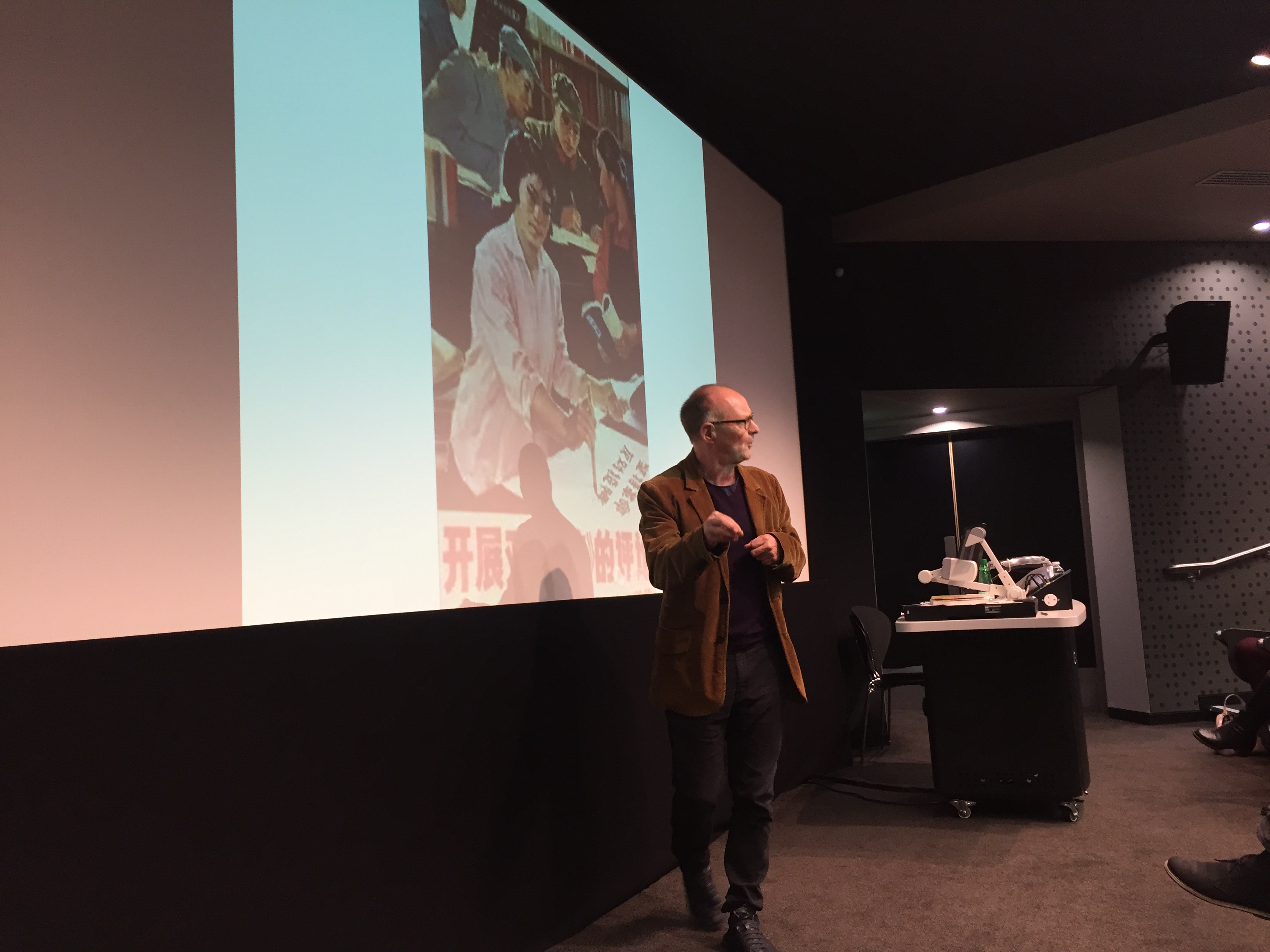 Goldsmiths Asia Centre and NICD invited experts from political, industrial, academic, and research fields to have discussions on innovation and cooperation of performing arts, the future of Sino-UK creative & design industries, among other core topics and exchange their research and personal experiences in promoting and exporting cultural interests and differences and how this has influenced our cultural tastes and interests in both countries.

The Conference also saw Goldsmiths Asia Centre and NICD sign a Memorandum of Understanding to further their collaboration in their continued relationship in activities and research in the field of cultural studies between Asia and UK.

Among those who attended included Embassy of the People’s Republic of China, National Ministry of Culture in China, UK Chinese Opera Association, The China Design Centre,

as well as academics from Goldsmiths, Beijing International Studies University and Newcastle University.

This event is part of 2015 UK-China year of Cultural Exchange, which aims at establishing the cooperative relationship between cultural institutions and enterprises in China and UK, advancing further and lasting development between UK and China and continue discussions and support into cultural activities and trade.