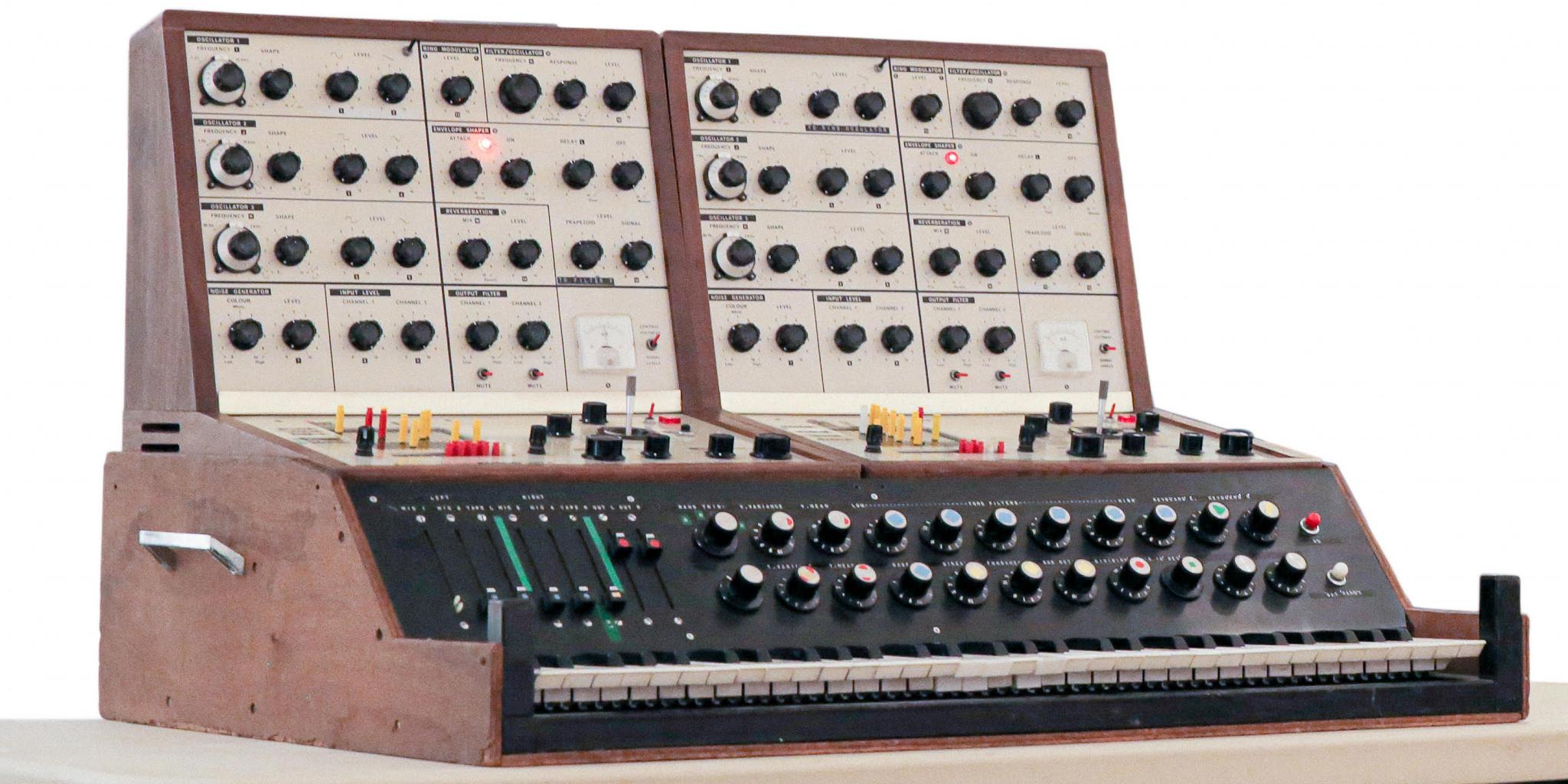 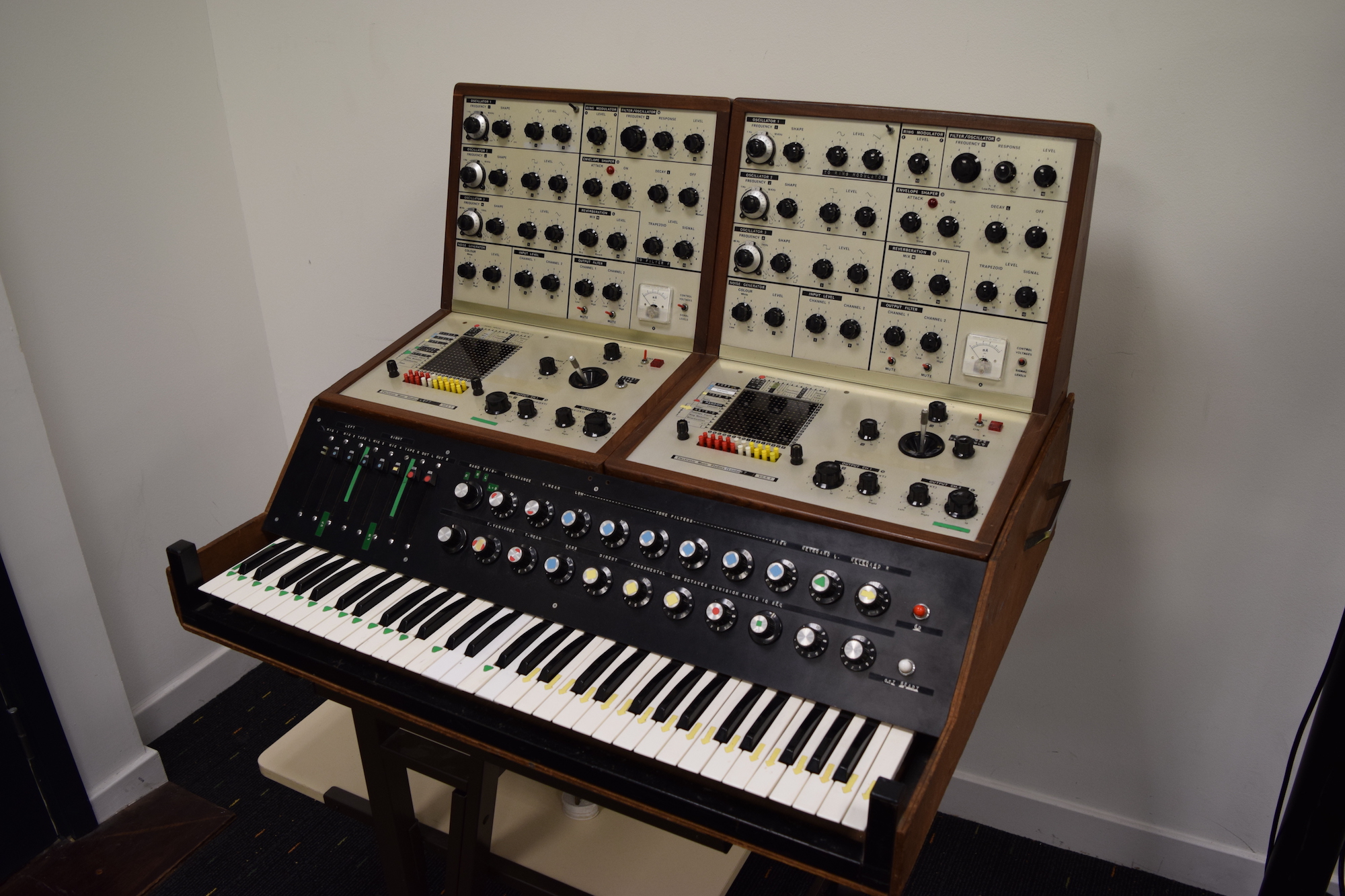 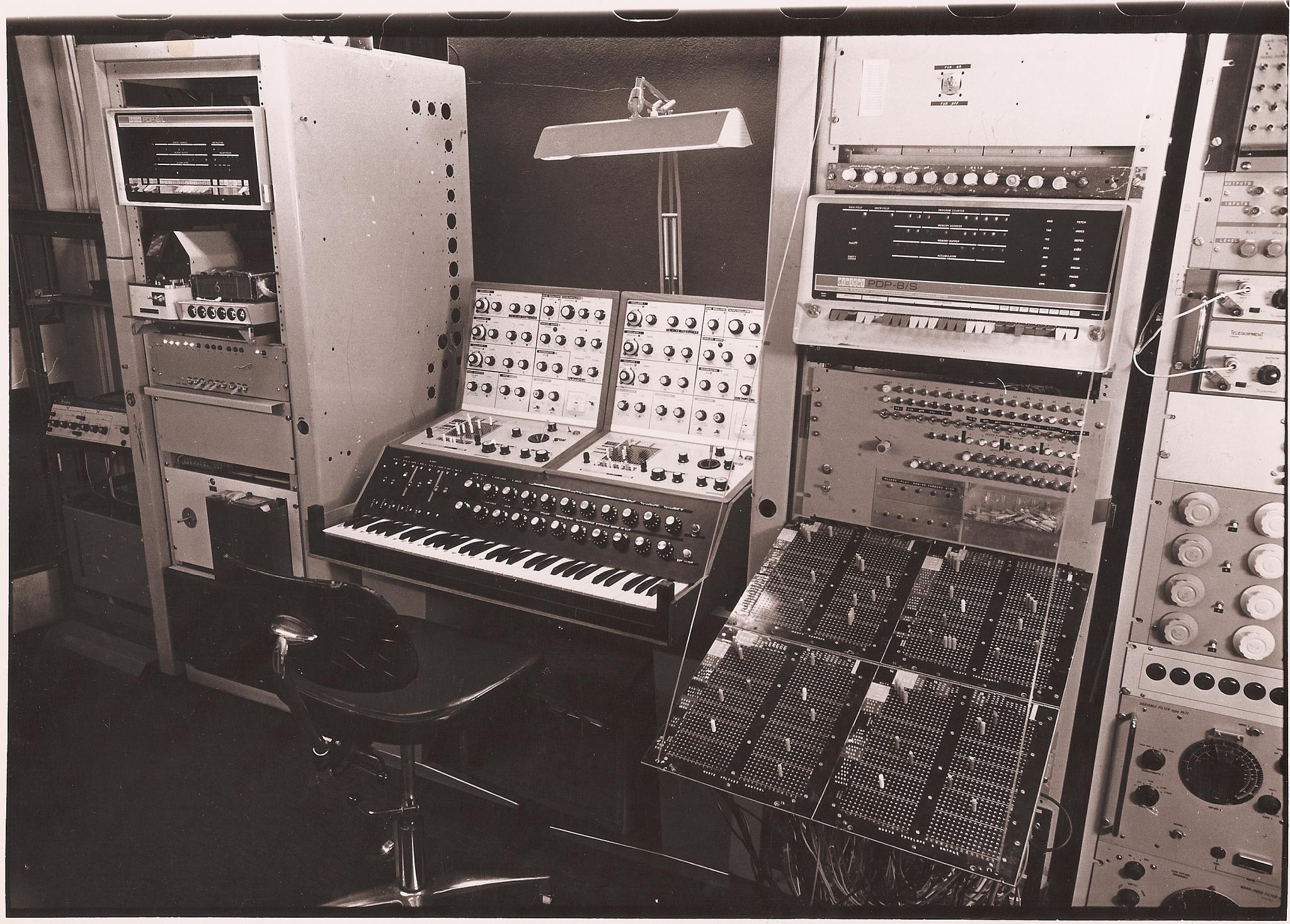 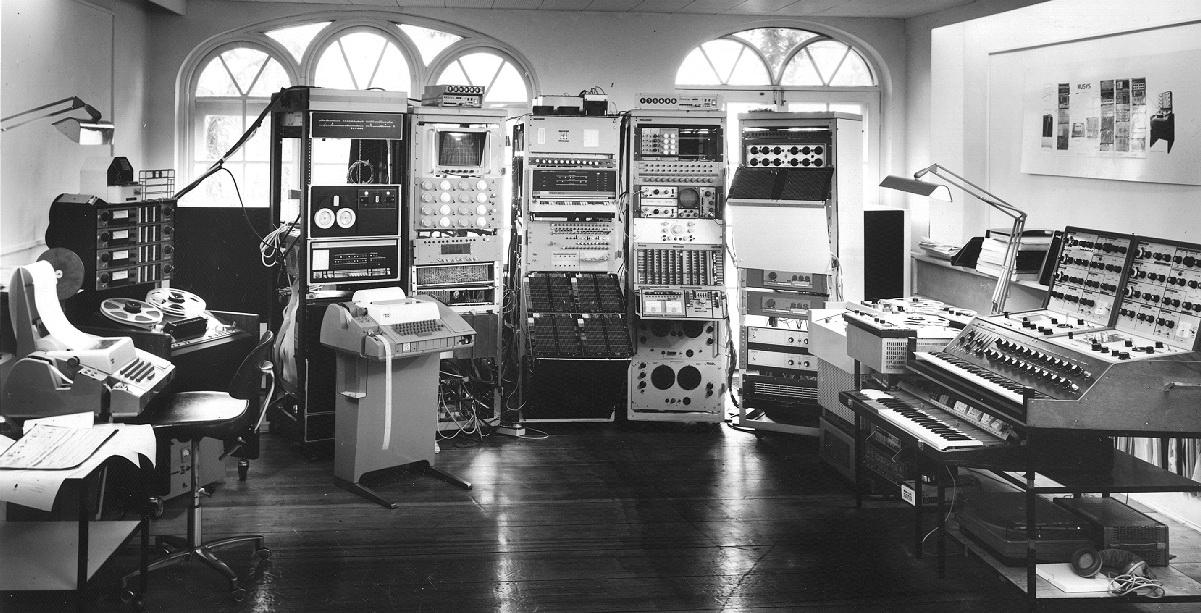 The VCS4 was produced by the world-renowned Electronic Music Studios Ltd (EMS) company in London in the late 1960s, run by composer Dr Peter Zinovieff. It was one of a number of early EMS synthesisers used by pioneers of electronic music in Britain such as Harrison Birtwistle (Medusa) and Tristram Cary, who took it to the Royal College of Music after the break-up of the original EMS studio in Putney.

The instrument, which is the only one in existence, combines two VCS3 synthesisers with a ‘base station’ featuring a keyboard, external audio input mixer, random staircase generator and unique tone/filter/harmonic generator circuits to create a custom and highly versatile instrument. VCS3 synthesisers have been used by such luminaries as Delia Derbyshire, the BBC Radiophonic Workshop, Aphex Twin, Brian Eno, Hawkwind, Pink Floyd and Robert Fripp. For many years the VCS4 had been thought lost until in 2019 Simon Desorgher, the then owner of the VCS4, approached the Department of Music with a proposal for the VCS4 to move to Goldsmiths so as to be maintained and made available to students and researchers in the Electronic Music Studios.

After Goldsmiths Electronic Music Studios were founded in early 1968 (the first permanent electronic music studio in the UK university sector), the studio obtained two of the first EMS VCS3 synthesisers in 1971. It is fitting therefore that the VCS4 is now housed in Goldsmiths Electronic Music Studios, affording opportunities for it to be used by undergraduate and postgraduate students in both their compositions and performances.

The EMS VCS4 was acquired by the department by research associate Dr James Bulley with support from Goldsmiths Friends and Alumni Fund.

A short history of EMS synthesisers

Historic performances – Electroacoustic Cabaret: music for motorbike and electronics (The long one called Infernal Clanking of the Chains and Cogs of Beelzebub uses the VCS4 but you can’t see it in the video because it is off stage)

Our System-100M dates from the very early 1980s. It sounds fantastic and offers an ideal starting point for an exploration of modular synthesis. The system is built into three 191-J racks and features modules 110, 112, 121, 130, 131, 140, 150 and 182.  We also have the Polyphonic 4CV controller keyboard (184) and a Kenton Pro 2000 MkII unit to facilitate MIDI/CV control. System-100Ms have been used by artists such as Depeche Mode, The Human League, Orbital, Vince Clarke, Hans Zimmer, Heaven 17, and Chris Carter of Throbbing Gristle.

A classic electric piano from the mid 1970s. This is an electro-mechanical instrument; sound is generated when felted hammers strike metal reeds. This is picked up by an electrostatic pickup system.  Played aggressively, the Wurlitzer can be sharp and punchy. Gentle playing reveals a sweet and vibraphone-like character. Overall the instrument is extremely dynamic with a similar (yet distinct) tonal character to a Fender Rhodes.

61 note combo organ as used by: The Animals, The Dave Clark Five, The Rolling Stones, The Zombies, The Beatles, The Monkees, The Four Seasons, Bob Dylan, The Doors, Van Morrison, The Velvet Underground, Fleetwood Mac, Tom Petty, Elvis Costello, The Stranglers, R.E.M., The Horrors, Arctic Monkeys and many more. This is a particularly nice early example from around 1965 and was made in the original Jennings factory in Dartford. This instrument is currently on extended loan to the EMS from the Studio Manager’s collection.

Hugh Davies was a composer, improviser, instrument maker and music educator. He was also the first Director of Goldsmiths EMS (between 1968-86). Following his passing in 2005 the department acquired his archive: a vast resource of historical material, recordings, books, papers, handmade instruments, studio technology and improvisational tools. Whilst much of the archive is housed in Goldsmiths Special Collections, various functioning items have been identified and are now based in the EMS for staff and student composition and research.

While items from the Hugh Davies collection are generally available for use in the studio access is subject to external commitments regarding loans, display and use.

Article about Hugh Davies and the EMS in Sound on Sound, February 1987.

Designed by Michel Waisvisz for STEIM in Amsterdam the Hugh Davies’ unit comes from the original run of 4000 built in the mid 1970. As a child Waisvisz discovered the creative sonic potential of physically engaging with electric circuits by touching their components – essentially shorting components on radio circuit boards. In the late 1960s be began collaborating with Geert Hamelberg to design circuits specifically with the idea of touch interaction. This led to the development of the basic cracklebox: based on exposed circuit boards with 'malformed' oscillators that were highly unstable and sensitive to finger connections. The Crackle circuit was eventually built into a small wooden box with finger contacts and a speaker. The units were battery powered to avoid hum and exposure to dangerous electrical shocks.

The sound of Cracklebox is hard to sum up in words: it buzzes, clicks, whines and is an essentially unpredictable generator of fascinating electronic tonal and gestural colour.

After the crackle box Waisvisz went on to design the Crackle Synth. This is based around three Crackle box ‘engines’ and features a touch pad (totalling 25 contact points), a 12-step key pad (each with a setting potentiometer) and controls for the individual circuits. There is also a built in speaker and direct out socket.  The sound is highly unpredictable and the instrument is extremely expressive.

Electronic Dream Plant launched this monophonic synth in 1978 as an entry level device for the budget end of the market (£199!). With its toy-like appearance - plastic build, cartoonish graphics and touch-sensitive electrostatic keyboard it was not taken seriously at the time. They are quite fragile any found their way into landfill in the subsequent decades. As a result they are now extremely hard to find in good working order.  Inevitably there’s more going on here than meets the eye, as Vintage Synthesizer explains,

“A look under the hood, however, reveals some nice surprises. The WASP is monophonic and powered by two digital oscillators supported by analog filters, envelopes and controls. This makes it one of the earliest compact digital/analog hybrid mono-synths, and it sounds great! The Wasp offers flexible subtractive synthesis. It's pretty easy to dial up some cool bass, synth, and other classic monophonic sounds. Its designer, Chris Hugget, also designed the Oxford Synthesizer Company's venerable OSCar Synthesizer. The Wasp has been used by 808 State, Dave Holmes, Vince Clarke, Nick Rhodes (Duran Duran), WhiteHouse and Add N to (X).”

“With these home-made instruments, Davies could proceed, with a natural integrity in which he clearly delighted, to construct a whole world of sounds: sometimes tiny ones (springs, for instance) amplified, but also purely acoustic sound sources, such as toys. Even the shopping basket on wheels in which he transported his creations could, subject to the right conditions (the broken paving stones outside New Cross railway station, for instance) become an instrument in its own right.

“Though easily self-sufficient as one-man band, Davies also collaborated with many other musicians throughout his life, mostly free improvisers who, like himself, operated on the fringes of more mainstream musical enterprises. From long since defunct groups such as Music Improvisation Company (including Derek Bailey and Evan Parker), to Dutch musicians such as Han Bennink (Davies joined a Dutch group that played a famous concert with the jazz trumpeter Don Cherry), right up to recent work with Hans-Karsten Raecke, Davies played all over Europe and occasionally elsewhere; a substantial discography attests to this career.” - Keith Potter

Goldsmiths is in the process of curating and conserving many of Davies’ instruments and a subset of the collection is now available for use in the EMS. For easy access this has been set up as a series of themed ‘kits’:

And last but not least:

‘Two years before I did Piano Burning, in 1966, I was living in Chiswick, and sort

of in a slump creatively. I decided to permanently prepare a little upright and got hold of one that was in pretty bad condition, but still playable. I had a lot of fun with it for

a year or so. Let’s see… I had a little toy train engine that you could haul up and down several of the bass strings; I inserted slivers of bamboo into the soundboard, so that

it was like a thumb piano and it resonated like crazy. Hugh Davies and I used to frequent a doll-parts’ store to find odd springs and other things that we could pick up and use. There, I found dolls’ eyes with eyelids that could move up and down, so I inserted a couple of those into the treble strings, and when you would trill on a couple of particular notes, it would flirt with you. And then John Lifton made a bubble-blowing machine, for which we

cut a mouth out of the side of the piano and put on big Plasticine lips. Then he hooked it up so that when you played softly using the soft pedal it would blow bubbles out of the mouth like anything. So, that was the very first, though I never labelled it as the first one, but in reality that was where I got started. And then Piano Burning was essentially the second. This was all with the idea that John Cage had done wonderful things with prepared piano. But he always had to be very careful not to damage the piano. So this was: what can you do when you’re willing to go further.’

From an interview with Irene Revell in 2014. Click here to read the interview.

Formally, this piano is part of the Hugh Davies Collection; when Annea left London she gave it to him to look after (hence it being in his house, and now at Goldsmiths EMS). Annea is very happy for students, researchers and artists to use the piano. However, it is very fragile and access requires a written proposal/expression of interest. Enquiries will be dealt with on a case-by-case basis. Please contact the EMS for more information.