The CISP Salon is a platform for centre members to explore and probe topics and issues related to science and technology in society. 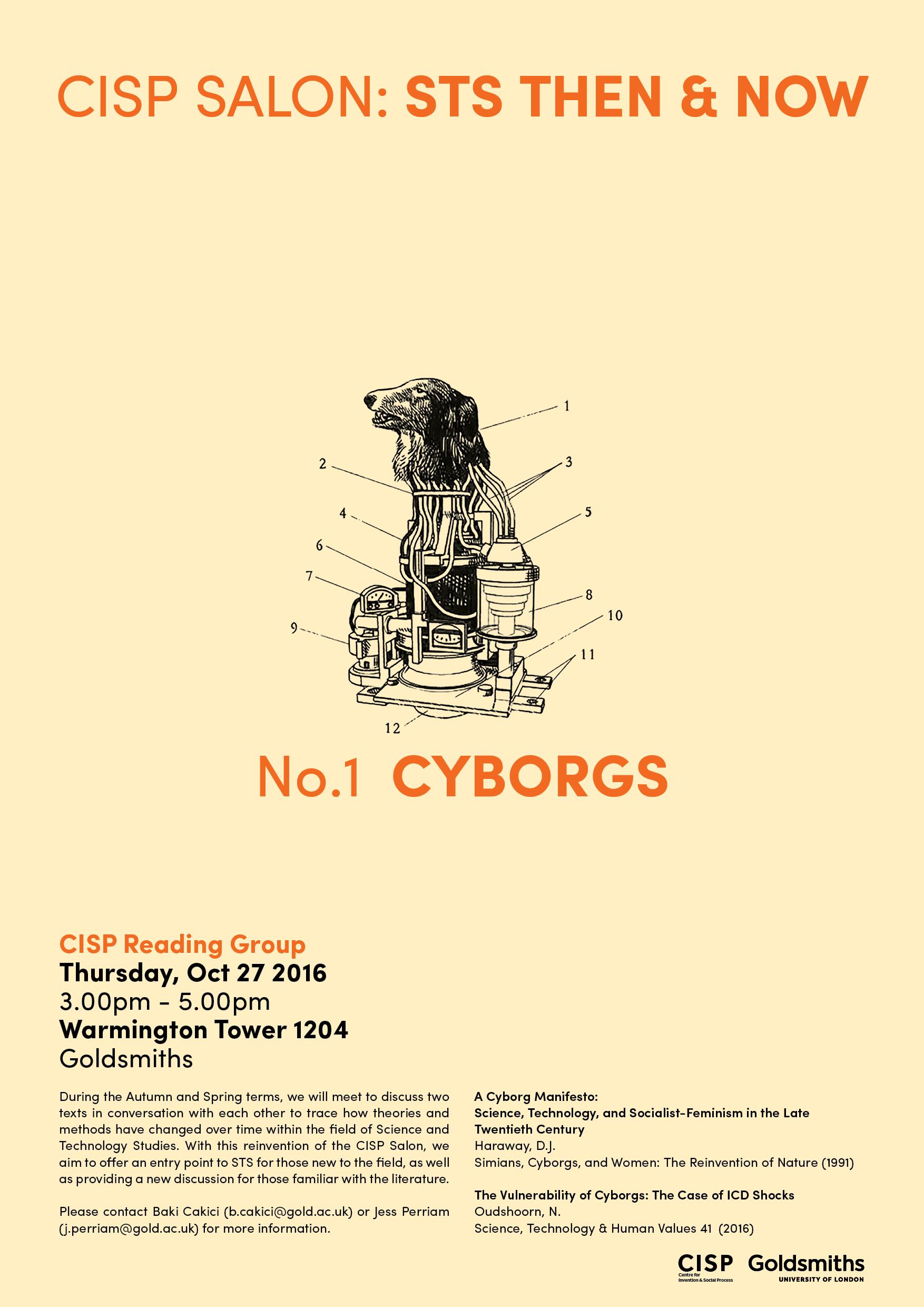 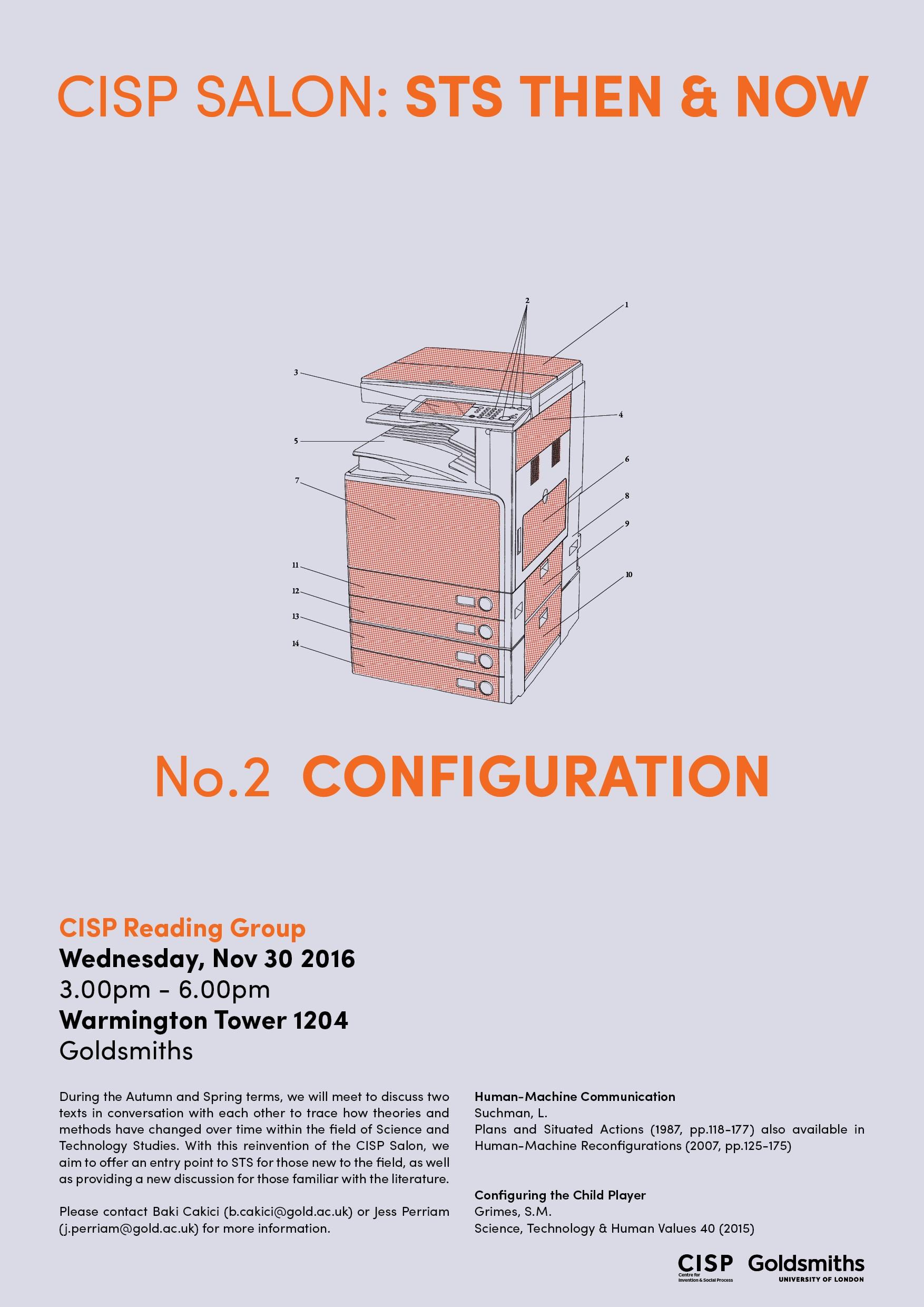 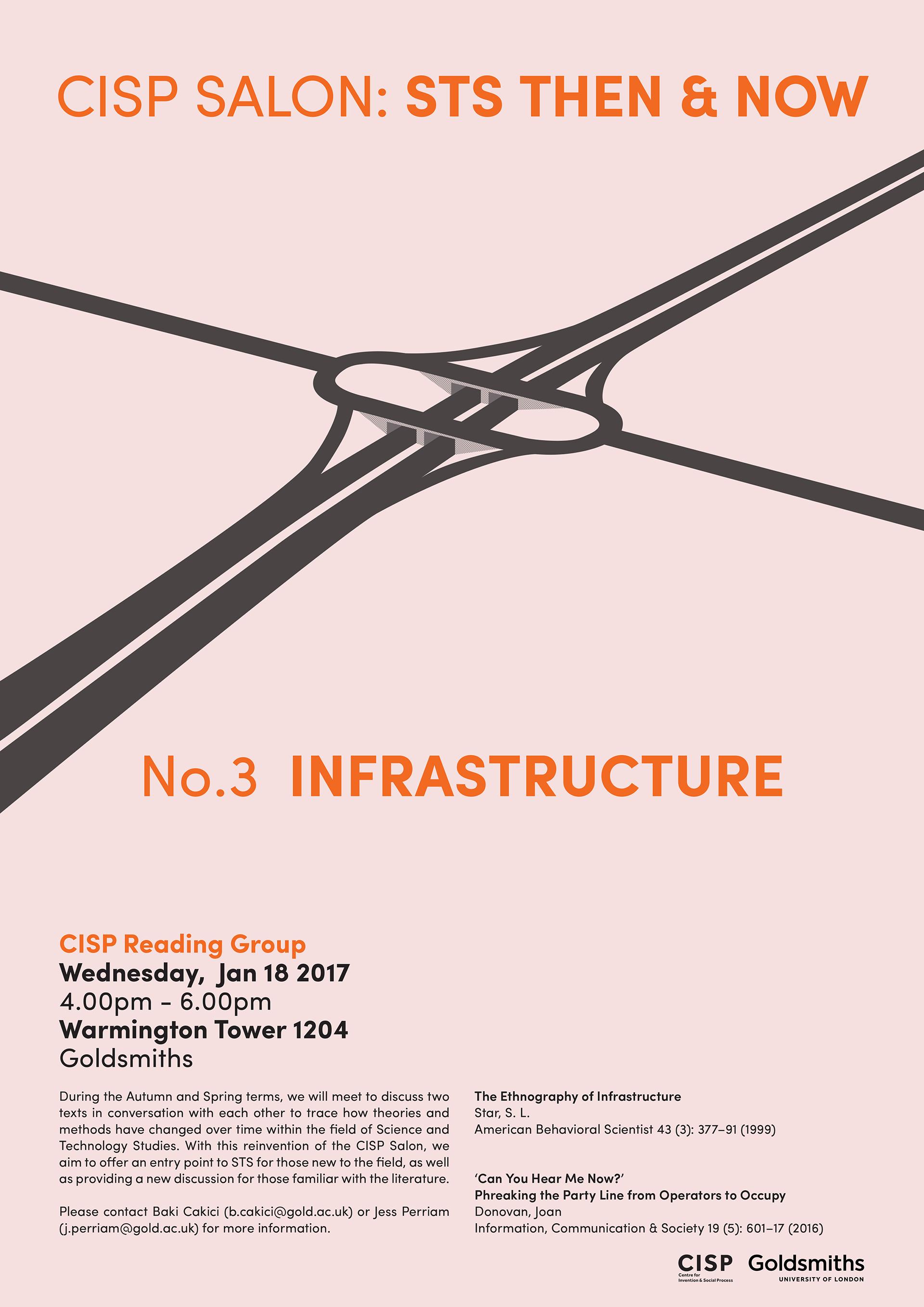 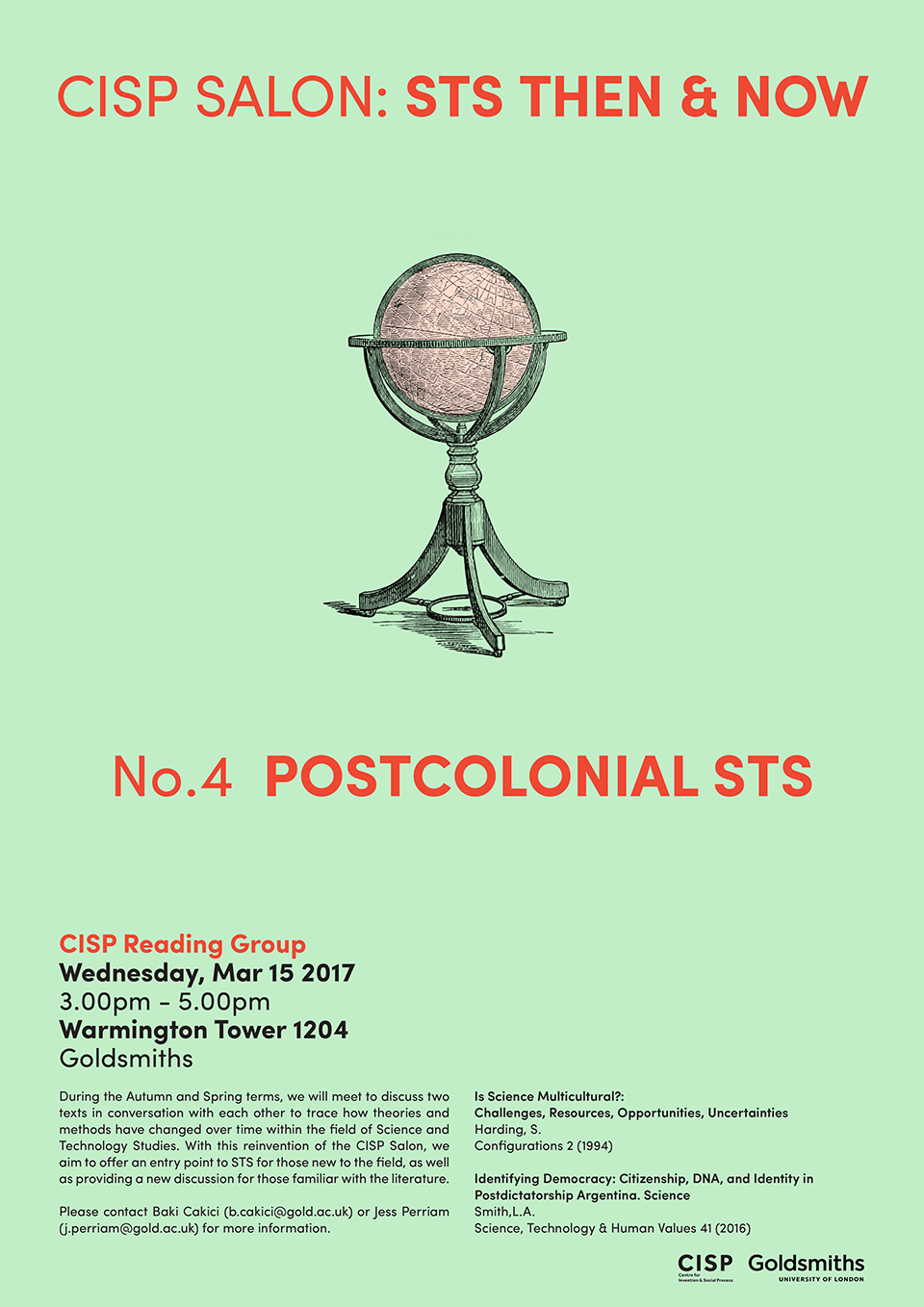 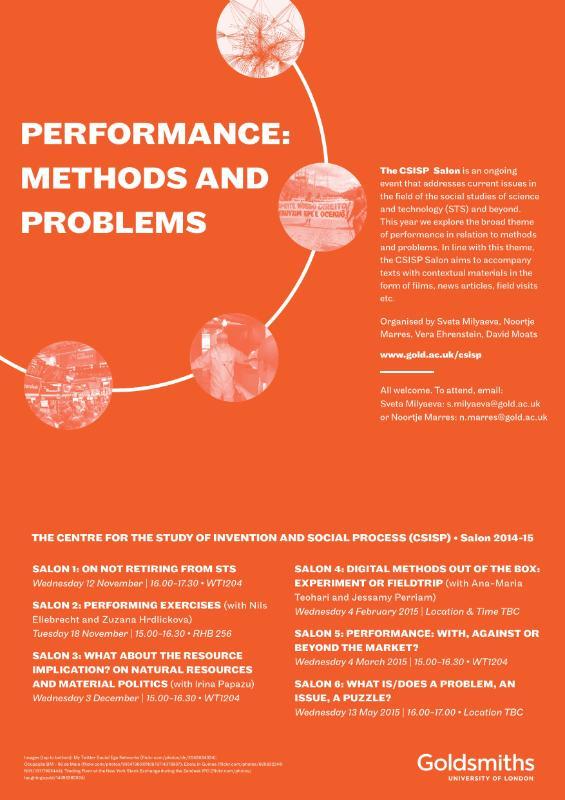 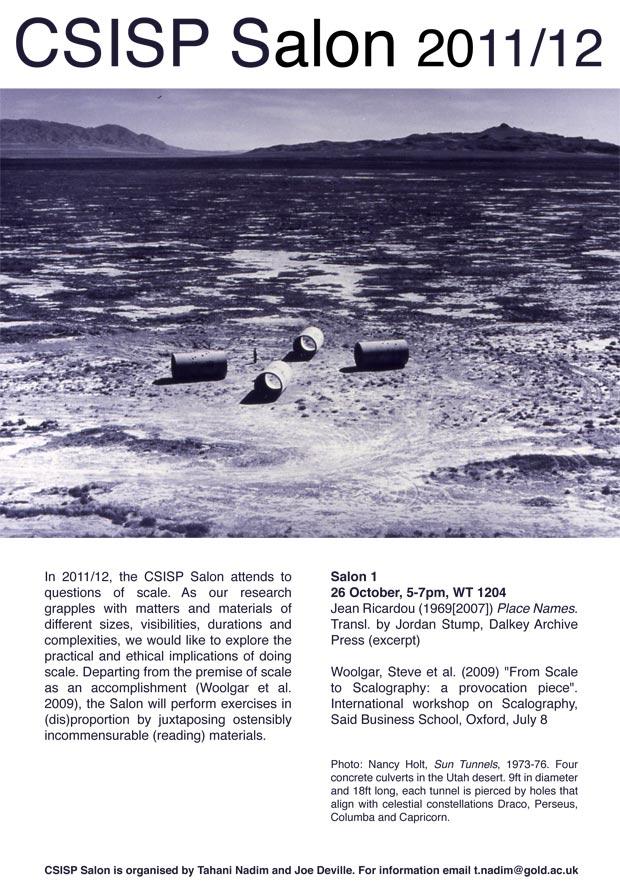 Participants were also asked to bring some soil with them to the session, to act as a point of focus for our discussion.

The CISP Salon is an ongoing forum where CISP members and others meet to exchange ideas and discuss their research interests. During the Autumn and Spring terms (2016-2017), the salon will focus on the evolution of theories and methods in Science and Technology Studies (STS). At each session, we will discuss two texts in conversation with one another, to trace how concepts have changed through time within the field. With this format, we aim to offer an entry point to STS for those new to the field, as well as providing a new discussion for those familiar with the literature.

Back to basics: Invention and social process

The CSISP Salon is an on-going event where CSISP members and others meet to debate issues in the field of the social studies of science and technology and beyond. This year we explore the broad theme of performance in relation to methods and problems. In line with this theme, the CSISP Salon aims to accompany texts with contextual materials in the form of films, news articles, field visits etc.

Salon 2: Performing Exercises
(organised with Nils Ellebrecht and Zuzana Hrdlickova)
Tuesday 18 November, from 3:00 to 4.30, in RHB 256

Salon 3: What about the resource implication? on natural resources and material politics
(organised with Irina Papazu)
Wednesday 3 December, from 3:00 to 5.30, in WT1204

Salon 4: Digital methods out of the box: experiment or fieldtrip
(organised with Ana-Maria Teohari and Jessamy Perriam)
Wednesday 4 February, time and location tbc

If you would like to attend, please send an email to Sveta Milyaeva or Noortje Marres 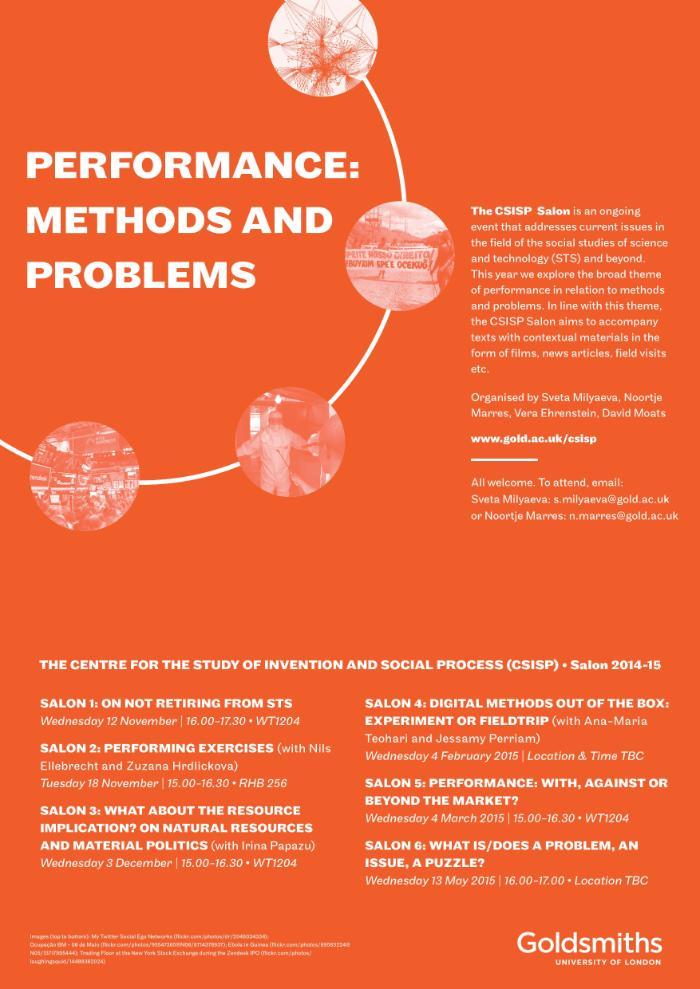 In an Age of Devices Before Devices, Are We All Post-Representation?

This is an invitation to CSISP members and Sociology PhDs to join us for the CSISP Salon led by David Oswell.

This Salon will be led by David Oswell and will explore the recent focus in STS on the concept of "devices". The intention though will be to contrast contemporary STS understandings of 'devices' with work in cultural theory and research from the 1980s. The intention is to raise questions about a 'post-representational' and 'materialist turn' in the context of the (inter)textualities of devices. In doing so, it is contended that for any sensible discussion of 'descriptive devices' an engagement with 'description' is as necessary as one with 'devices'.

David has chosen two readings: Ian Hunter's (1984) 'After representation'  and Colin Mercer's (1984) 'Entertainment ore the policing of virtue'. The CSISP Salon is an ongoing meeting to debate issues within the field of sociology of science and technology and beyond. This year we are exploring the works of classic STS thinkers and imagining what a cannon of "CSISP classics" might look like.

CSISP Salon is an ongoing event where CSISP members meet to debate issues within the field of sociology of science and technology and beyond. This year the Salon will focus on the canon of "CSISP Classics". Each Salon will centre on figures central to the genealogy of STS, exploring the ways in which these thinkers animate the work of CSISP today. Participants are also encouraged to propose thinkers who are less commonly associated with STS, whose work might fruitfully be accommodated within this framework or indeed problematise it.

CSISP Salon is an ongoing event where CSISP members meet to debate issues within the field of sociology of science and technology and beyond. This year we explore devices, images and futures. In line with this theme, the CSISP Salon aims to accompany texts with the context in the form of films, news articles, exhibitions etc.

If you missed the last Salon you can read a re-telling on the all-new CSISP blog.

The CSISP Salon sprang back into action with its last instalment for 2011-2012 on April 25th Wednesday in the WT at 4.30pm. In the Salon, we were reading Javier Lezaun: 'A Market of opinions: the political epistemology of focus groups' (2007).

This was placed alongside some textual fragments that we pulled from the novella 'Mr Squishy' by David Foster Wallace.