Four statues on the front of Deptford Town Hall, which is part of our campus, are to remain in place as the College increases community engagement and schools outreach to investigate and share the stories behind these examples of contested heritage.

The decision not to seek permission to remove the statues of Sir Francis Drake, Cromwellian admiral Robert Blake, Lord Horatio Nelson and a representative naval figure was made by Goldsmiths’ Council, the College’s governing body, following a six-week public consultation about their future.

The community-led consultation focused on the views of local people and was also open to all members of the public and its outcomes were considered alongside a range of other information by Goldsmiths’ Council.

Goldsmiths’ Council is the most senior decision-making body at the College and has responsibility for making decisions about the College’s estate including campus buildings.

The College will now install free-standing explanation panels on the window ledges beneath the statues and develop an engagement programme and a grant for local artists of colour to explore the issues raised by Deptford Town Hall and its statues. 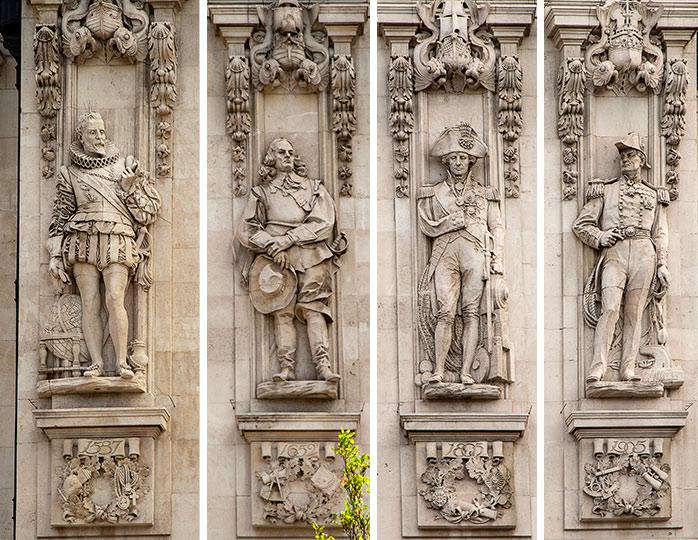 From left to right:

Why we reached this decision

When Deptford Town Hall was opened as a centre for local civic administration in 1905, the historical figures depicted in the statues were seen by the great majority of people in Britain as national heroes who should be celebrated. Their inclusion on the building represented the wishes of local people, with Deptford still a major maritime centre for the country at that time.

As time has passed a more critical view has been applied to the actions and achievements of those depicted. There is no doubt that these men played a major part in shaping British and global history but the ways in which these narratives are considered has evolved since these statues were created.

Now there is clear recognition of the damage and hurt inflicted by slavery and the colonial system which supported slavery, and the impact this continues to have on modern society through ongoing structural inequality and injustice.

The College fully recognises these statues are a source of pain for members of our community and local people, by serving as reminders in a public space of the systematic oppression of Black people and people of colour.

So, how do we meaningfully address this issue? As shown through our public consultation it is a complex matter where there are range of strongly-held views and it is important that we listen to and consider all of these perspectives.

We also recognise our duty, as set out in our Charter, to “advance knowledge, wisdom and understanding by teaching, study, public service and research”.

It is also important to note that the building is currently Grade II listed, with an ongoing application from a third party to have this increased to Grade II *. The government has published legislation to “protect England’s cultural and historical heritage”, with any planning application likely to be extended to the Communities Secretary.

In light of this, Goldsmiths has concluded that the most appropriate way forward on this issue is to not seek to remove these statues and for the College to develop new ways to critically question the accepted histories of those depicted.

We will use these statues as a platform to undertake a critical analysis to be able to tell the full story of these individuals and of the people whose lives they influenced, with an ambition to throw new light and understanding on the global consequences of the actions of these figures.

Context of the statues and the building

The four statues are carved into the façade of Deptford Town Hall so are part of the fabric of the Grade-II listed building which was opened in 1905. Deptford Town Hall was acquired by Goldsmiths in 1998 and since then has been used as a space for teaching, administrative offices, and public events including exhibitions and concerts.

The historical figures portrayed in the four statues either have links to Britain’s role in slavery or the colonial system which supported slavery.

Britain’s involvement in slavery is not considered a source of national pride by modern values and it is the abolition of slavery that is often centred in the national conversation, as opposed to the harm it caused.

Student and staff groups at Goldsmiths believe that there should be a focus on the ongoing legacy of slavery and its impact on contemporary life – with concerns raised that the Deptford Town Hall statues glorify imperial dominance and play an active role in perpetuating racism today.

Over the last few years, a national debate has emerged about how best to reconcile the symbolism of some statues of historical figures with an increasingly diverse British identity.

Some have argued that retaining such statues serves as a reminder of a past that merits enquiry and challenge, with further work around interpretation and possibly re-contextualisation required, while others believe such statues should be removed from their prominent positions.

Historic England recognises that there are “historic statues and sites which have become symbols of injustice and a source of great pain for many people”.

How we consulted the local community, Goldsmiths community and the general public

Goldsmiths ran a public consultation from 1 September to 17 October 2021.

We asked local communities, which included Goldsmiths students, staff and graduates, to have their say about these statues and also welcomed views from those outside the area with a particular interest in this building and its links to Deptford’s maritime history

The focus was to gather public opinion in order to present the widest range of views possible to Goldsmiths’ Council and help inform their decision-making over Goldsmiths' position on the future of the statues.

There were two pathways for consultation: a direct mail postal consultation with 8,500 residents in the New Cross area and an online consultation which was open to all members of the public.

This approach, consultation methodology and delivery were approved by the Deptford Town Hall Stakeholder Group, a body founded in 2020 to help guide and monitor the College’s work and whose members include local Councillors, student and staff representatives, and the Senior Management Team.

The consultation responds to one of the demands of Goldsmiths Anti-Racist Action (GARA), a Black and Person of Colour-led student campaign group founded at Goldsmiths in 2019. Read a statement from GARA (PDF).

The postal consultation received 122 responses in total, having been sent to 8,500 homes in the New Cross Ward.

This resulted in the College focusing on the outcomes of the public postal consultation which secured a higher score on the Cronbach’s Alpha scale.

After carefully considering these results of the postal consultation alongside other evidence Goldsmiths’ Council agreed that Goldsmiths will not seek permission to remove the statues.

The College is starting work immediately on installing free-standing explanation panels on the window ledges beneath the statues and developing a civic and schools engagement programme and a grant for local artists of colour to explore the issues raised by Deptford Town Hall and its statues. Goldsmiths will also continue to develop ways to consult with our local community around Deptford Town Hall, to help build further understanding of the complex and often difficult issues around contested heritage.