Today (26 March) marks 50 years since the start of the 1971 Liberation War in which Bangladesh eventually won its independence after a brutal armed struggle.

For over a decade Dr Aminul Hoque from the Department of Educational Studies has researched the experiences of British-Bangladeshi communities shaped by the legacy of years of migration, bloodshed, and the fight for democracy.

We asked Aminul about this often overlooked conflict, how its impacts are felt both in his studies and in his own family history, and how for many Bangladeshis this anniversary is a time for reflection and mixed emotions…

Pete Wilton: Why is marking this 50th anniversary so important?

Aminul Hoque: The British-Bangladeshi community are very much ingrained within the wider socio-cultural fabric of what it means to be ‘British’. Mass migration of Bengalis – mostly from the province of Sylhet – to the UK shores has taken place since WWII. As members of the Commonwealth, many thousands of Bengalis were invited to come and help rebuild post-war Britain and work in certain industrial sectors no longer attractive to the domestic workforce. As of the last Census (2011), there are approximately 513,000 British citizens who define themselves as ethnically ‘Bangladeshi’ but also proudly call the United Kingdom their ‘home’.

Bangladeshis have a very rich and proud history and culture focused around language, art, food, fashion, community, family and religion. And this point is very important, because alongside resisting a political and economic hegemony exercised by West Pakistan upon East Pakistan (as it was known then), the 1971 Liberation War was also a struggle for self-determination by a group of courageous people who wanted to preserve and protect their Bengali cultural and linguistic heritage. Subsequently, we witnessed the creation of Bangladesh on the 16th of December 1971.

This Friday, March 26th 2021, marks exactly 50 years since the West Pakistani army invaded Bangladesh (then known as East Pakistan), annulled the results of the democratic election of 1970, imprisoned the leader of the victorious Awami League Party (Sheikh Mujibur Rahman), and a subsequent brutal and bloody war ensued for nine months resulting in the death of many thousands of civilians. I was not born yet, but have heard oral stories from my mother who was living in fear in our tranquil village, and in hiding from the military while also protecting my older siblings. It was a harrowing time for my father who was working and living afar in London at the time – worried, anxious and helpless.

The events of 1971 are not just important geo-politically for the region of South Asia, but also it symbolises a moment where power, politics and violence took precedence over humanity and democratic self-determination. That is why it is important to mark the 50th anniversary of Bangladesh. To remember the fallen, the murdered, the protestors, the campaigners, the ‘everyday’ civilians who all perished while resisting tyranny and oppression.

AH: It is a very long, complex, important and also tragic history – where many thousands of civilian lives were lost all in the name of power and politics.

1971 evokes so many emotions and uncomfortable memories. 1971 is a moment of reflection and also harbours much pain, sadness, trauma and suffering for many millions of Bengalis across the globe, including British-Bangladeshis. Us Bangladeshis, perhaps, also need a sense of ‘closure’ from this horrible episode of history.

1971 is also a year of triumph for democracy and self-determination as a group of guerrilla fighters, with the aid of the Indian military, resisted the violent onslaught from the West Pakistani army, fought back and strived for liberation. For decades, the East Pakistanis were treated with disdain, as second-class citizens and discriminated against by the political powers in elitist West Pakistan situated 1000 miles away. Disconnected by geography, language, ideology and ethnicity, there was a ‘crisis of representation’ of East Pakistanis in the cultural, military, political and economic prosperity of a united Pakistan. War and violence can never be justified in my point of view and this bloody encounter is a dark stain in the history of the world. This gory affair has been immortalised in the symbolism of the national flag of Bangladesh – a dark green background with a red (bloody) circular stain in the middle.

PW: Why do you think this history is not more widely talked about today?

AH: Embroiled within the wider Cold War regional politics of the time and still grieving from the devastation of partition, there is a lot of embarrassment, shame, political amnesia and skulduggery involved by those responsible for the key decisions that led to the awful events of 1971. Let’s not also forget that there was a systematic effort to ship out all foreign journalists from the region before the suppression started, and that is why there was scarce international coverage and footage of the event.

However, a new generation of Bangladeshis, activists, artists and human rights campaigners are writing about this period of history, making documentaries, films and ‘talking’ about 1971. We are determined to document this period of history so that it is not forgotten and, crucially, my own very British-born Bangladeshi children need to also know about the history, heritage and culture of their ancestors.

PW: What lessons can today’s world learn from this liberation struggle?

AH: We should all remember the events of 1971 where we witnessed the absolute worst of humanity, but also saw the triumph of resistance, struggle and democratic rule. But we need to also learn our lessons from such a tragedy and ensure a future where violence, massacres and bloodshed is seldom an option.

PW: How is the legacy of 1971 reflected in your research into the British-Bangladeshi experience?

AH: 1971 acts as an emotional, cultural and political reminder to both older and younger generations of British-Bangladeshis of a motherland that exists both in memory, but also culturally and physically. My own academic research of younger British-Bangladeshis and the BBC4 documentary that I presented in 2020 entitled A Very British History: British Bangladeshis, explores the migration history and settlement of Bangladeshis in the UK and also examines the multifaceted nature of identity and ‘home’. The documentary also highlights the very ‘British’ nature of Bangladeshis and also the important contributions we have made in the story of modern Britain – fighting alongside the British during WWI and WWII, the rebuilding of post-war Britain by my father’s generation, and of course, the mass introduction of the ‘curry’ to the wider British population. And let’s not forget the wonderful Nadiya Hussain. Yes, she is one of us! My research and media work celebrates what it means to be both ‘British’ and ‘Bangladeshi’.

PW: What will you be doing to mark the anniversary?

AH: Along with raising awareness of #Freedom50 via social media and attending some local (virtual) events to celebrate the 50th anniversary, I am honoured to have been invited to do a keynote talk at an event organised by Newham Council celebrating British Bangladeshi history and culture. But perhaps, most significantly, my children and I will be sharing stories about Bangladesh – reflecting upon the legacy of 1971 but also rejoicing what it means to be ‘Bangladeshi’. 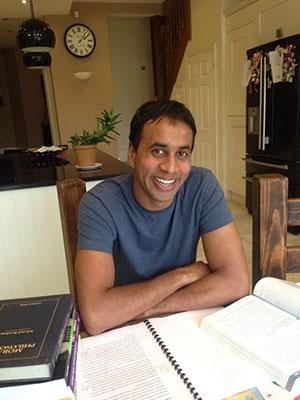