A new production of Arthur Miller’s 'Death of a Salesman', which sees the Loman family cast as African American, has drawn on the expertise of a Goldsmiths, University of London academic.

The production, which runs at the Piccadilly Theatre until early January, has been widely praised for giving a fresh take on a classic play with the Evening Standard describing it as ‘phenomenal’.

During a run at the Old Vic last spring the cast worked with Dr Nicole King, lecturer in American, Caribbean and Black British Literature at Goldsmiths to explore the history of black Americans in the 20th century, and they asked her back again for the Piccadilly production. I caught up with Nicole to ask her about the role of the American dream in the play, implicit whiteness and what Goldsmiths students got out of meeting the cast.

Elle Ayres: How did you first become involved with the play?

Nicole King: It was serendipity! A member of the production team emailed the department and asked if there was a specialist in African American literature and culture. I met with the two directors, Marianne Elliot and Miranda Cromwell, and what I immediately understood was that the play was not a ‘black version’ of Death of a Salesman but that they wanted to explore what dimensions the drama reveals when the central family is presented as African American.

Wendell Pierce had been cast as Willy Loman, the lead, but other than Joe Mydell, who plays Willy’s brother Ben, the rest of the cast was British and that’s why they needed me. Wendell and Joe knew all about the history of black American life in the 20th century because they had lived it and studied it but the other cast members weren’t as familiar with that history, or the time period of the play, the present of which is 1949 but which goes back in time to the 1920s and 1890s.

EA: What did your role entail?

NK: There were two main parts of the role. The first was that I led seminars with the cast focused on American history and the varied experiences of African Americans that are not so widely known, including middle-class life and experiences of migration across the United States. I created a timeline with key points including the dates of the Civil War and amendments to the U.S. Constitution that provided a context for understanding 20th century events and the interracial relationships and friendships portrayed in the play.

We had amazing, open discussions where Wendell and Joe would recall experiences of segregation, for instance, and other members of the cast made links to aspects of British life such as the current Windrush scandal. From there my role was to be a point of reference, if an actor was going through their lines and they had a question, they could email me, or speak with me during a rehearsal break.

The second part of my role was to write an article for the programme, which I did for the Young Vic and then expanded for the Piccadilly. In addition to providing historical context, I emphasise how racial identity is a factor in all productions of Death of a Salesman, this one has simply chosen to make race explicit rather than implicit.  At the same time, race is just one aspect of every character’s identity, and is conveyed alongside other aspects like class, gender and age. 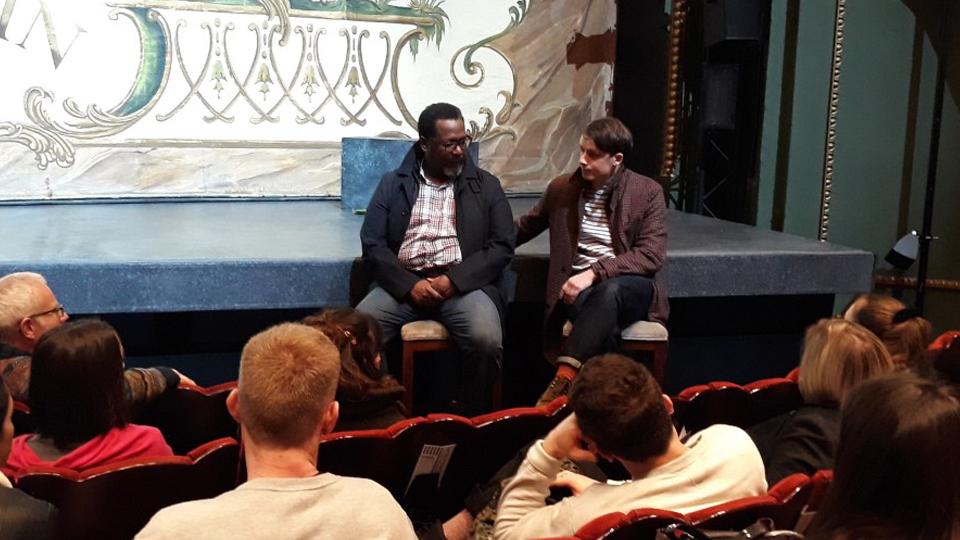 The reason this production works is not just because it shows the American dream to be a myth – Miller’s text does that all on its own – ironically, this production shows how that myth is colour-blind, how all types of people are seduced by it. In my article I highlight what the American dream meant to black people, sometimes it was configured as professional success and upward mobility, sometimes it was interpreted through individualism and bravado. There were competing social and political strategies for black progress and that too comes through in the play.

Talking to the cast about all of this helped them to understand how you could have a Willy Loman whose ideas about what it means to be successful might contrast with what his sons, neighbours or wife thinks. African Americans were as susceptible as any other group to the idea that hard work could guarantee a better future for their children.  In this production the determination and tragedy of Willy Loman is really brought to the fore if one understands that America’s extraordinary wealth was generated by the land stolen from indigenous people and the unpaid labour of generations of enslaved black people.

EA: Why were you asked to write an article for the programme?

NK: So many people will know the play, it’s a classic of American drama and it’s on some English Literature A Level syllabi, so to have a production that makes the Loman family African American might seem radical to theatre-goers who already have a firm idea of the play. I think another reason they wanted me to write the article was to highlight the aspects of American history I shared with the cast and to make that history, however briefly, explicit for British audiences.

EA: What was your biggest takeaway from working on the production?

NK: That would have to be our Goldsmiths outing. Richard Shannon and I took 50 students, from Theatre & Performance and English & Comparative Literature, to see the play and talk to Wendell Pierce and Matthew Seadon-Young, who plays Howard, Willy’s boss. Students asked great questions about the sparse set design, interpreting Miller’s words afresh, and how the cast worked together as an ensemble. Matthew and Wendell gave generous and personal answers which offered insight into the subjectivity of theatre and the impact this production had on them.

Wendell also encouraged students to, “Go back and read the play, then read Othello and Hamlet, and the works of (African American playwright) August Wilson and then come back to the play and reconsider how Miller is working with the tragedy form.” That advice was wonderful because he conveyed the joy, the intellectual excitement, of reading and comparing plays from different eras and traditions and then seeing live performances.

EA: What do you think other productions could learn from this one?

NK: Under Marianne Elliot and Miranda Cromwell’s direction this production reminds us that whilst race is a human invention, it is one which facilitates social and political hierarchies, and shapes our world. Internationally, black playwrights have creatively examined these ideas for a long time, and it’s great to see directors re-inventing ‘classic’ plays from the Euro-American tradition in this way too.  I suppose this production proves that there are potential seams of gold to mine from plays of previous generations, given the right combination of vision, talent, and opportunity.

There’s a lot to be said about contemplating how race, gender or ability is implicit in a drama and then what happens when we move one of these aspects to the foreground – it can add more layers, more depth. To me, that’s what makes this production of Death of a Salesman so moving and successful; and it also confirms how African Americans are uniquely situated to tell America’s stories.

Central image: Goldsmiths students meet members of the cast to discuss the production.

Nicole’s research is on the literary representations of young adults, blackness and modernity in the United States.