Belting out a tune alongside hundreds of others increases your tolerance for pain, improves happiness, and make you feel better-connected to your social group, psychologists from Goldsmiths, University of London and the University of Oxford have found

While it is already known that singing with others has positive effects, this new study is the first to confirm that the effects can be ‘scaled up’ to significantly larger groups. The researchers say their findings are consistent with the idea that music-making may have allowed our early ancestors to increase their community size beyond those found in other primates.

The team, led by recent Goldsmiths graduate Daniel Weinstein (Department of Psychology), worked with members of Popchoir -10 sub-choirs of 20-80 people who meet in their local area on a regular basis then gather once a year to perform in a megachoir of 232 singers.

Self-report forms were distributed at the start of rehearsals for both the small and large choir, with singers asked to rate their social connectedness from 1 (not connected at all all) to 7 (extremely connected).

A number of participants – excluding those who were pregnant or had smoked or consumed alcohol in the last two hours – also wore a blood pressure cuff, with researchers applying the maximum amount of pressure to test pain threshold as an indicator of endorphin release.

The singers then proceeded to spend 90 minutes singing Bon Jovi’s Livin’ On A Prayer, the Spice Girls’ Spice Up Your Life and Elton John’s Circle of Life, to name a few, before repeating the second half of a questionnaire.

For both the small and large singing groups, feeling of social closeness improved but the improvement was greater when singing in the megachoir, even though many of the singers didn’t know each other.

Tolerance for pain improved in both the small and large choir settings to a similar extent.

As a result, the researchers argue that music can play a big role in social bonding, particularly when we’re trying to create much larger cohesive groups than other primates – who bond through grooming and feeding – have been able to manage.

Lead author Daniel Weinstein comments: “We found that our sub-choirs felt a sense of closeness, which is to be expected when you rehearse together once a week.

“When they met to form the megachoir, the baseline level of bonding was low because they didn’t know each other, but it improved dramatically, indicating that even after only one singing session a large group of unfamiliar people can bond on the same level as those who are familiar within that group."

Co-author Professor Lauren Stewart, Goldsmiths Department of Psychology, adds: “We argue that music is a particularly powerful way to encourage large groups to bond and backs up the notion that cultural phenomena such as national anthems, religious music or team chants are behaviours that promote social bonding among people we don’t know personally.

“This behaviour plays a crucial role in human evolution by allowing us to increase community size significantly beyond those found in other primate species.” 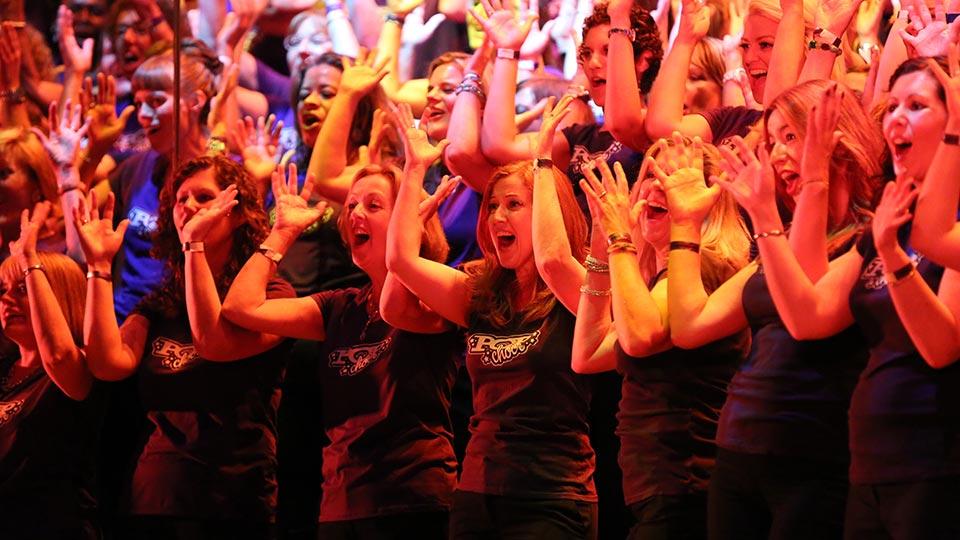 Popchoir Director and founder Helen Hampton says: "I originally set Popchoir up as I thought that singing pop music in a choir might be something that people would enjoy. What I totally underestimated was the extraordinary  effect being part of the choir would have on people, not only in terms of general enjoyment and benefits of singing, but also because of the community that we have created. Being a member of Popchoir has literally changed people’s lives.

"All have forged new and lasting friendships and risen to the challenge of things they never believed possible.  I know of members who have been able to stop taking anti-depressants because of their new-found confidence, raised self-esteem and the new and supportive friendships they have made in the choir.

"There are those who have been suffering from illness, from asthma to cancer to crippling pain,  who have all come forward with the same thanks and gratitude for the joy of being part of the choir and all that goes with it."