Dr Nirmal Puwar and Dr Mariam Motamedi-Fraser from Goldsmiths’ Methods Lab have worked with artists to produce new work that responds to the theme ‘Migrating Dreams + Nightmares: movement + materials’ and the classic 1975 book ‘A Seventh Man’ by John Berger and Jean Mohr.

The Migrating Dreams + Nightmares: movement + materials exhibition at Goldsmiths addresses how people are compelled or want to migrate for economic, political and social reasons and how global policies and economic developments are part and parcel of migration stories.

Authors John Berger and Jean Mohr granted the project special permission to work with images and text from their groundbreaking book ‘A Seventh Man', which focused on migrant workers in Europe. When the book was first published in 1975, it was largely ignored by the press and derided by sociologists as a 'pamphlet'. But for Berger, it spoke to people around the world who knew what it meant to migrate. The book has been translated into a number of languages including Turkish and Korean, which sit side by side in the exhibition with images and newly commissioned art work. New translations of excerpts in Punjabi, by poet Amarjit Chandan, and Farsi, by Leyli Behbahani, have also been commissioned by the Methods Lab.

Blackboards are everywhere in cafes and bars, but have become conspicuous by their absence on university campuses where new digital technologies have replaced more traditional materials. For the exhibition, artist Antoinette Brown has used chalk, blackboards and wire to bring the words of 'A Seventh Man' out of the pages and onto the walls of the university. Contemporary graffiti from the harbour of Larache in Monaco sits alongside text from the book, while artist Sadek Rahim’s sponge boats from his project No Crash! Boom! Bang! hang in the arches of the passageway. 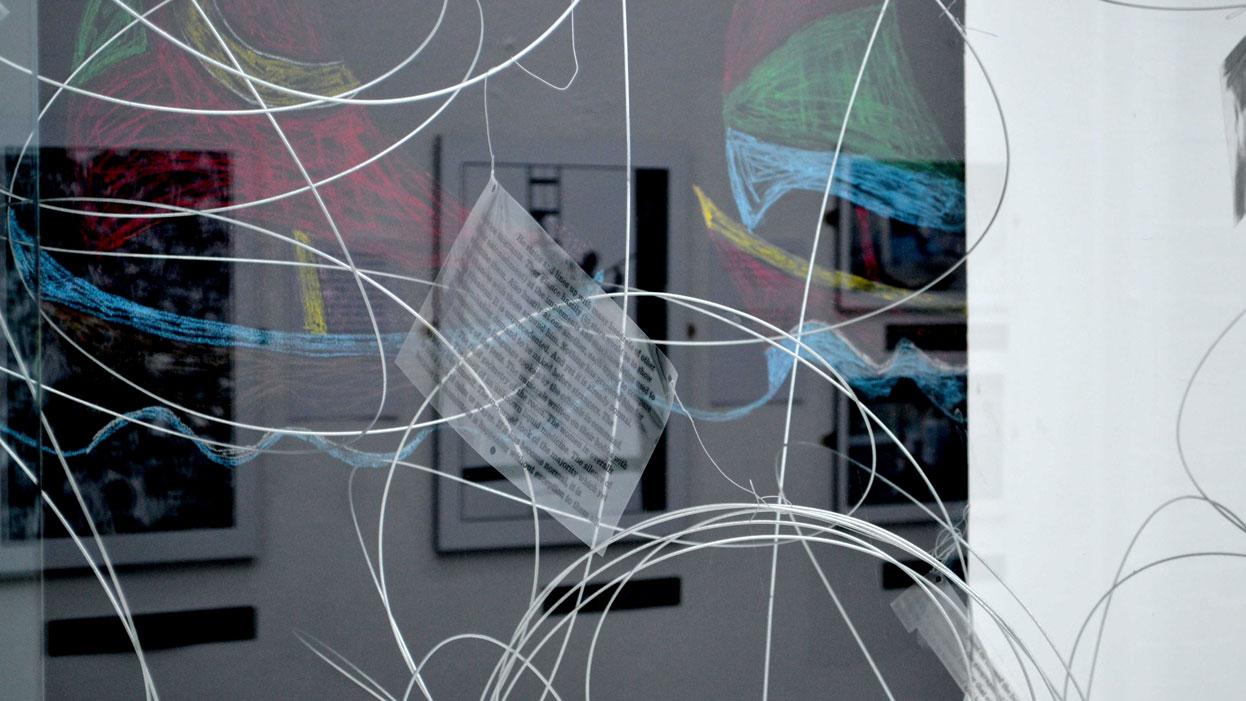 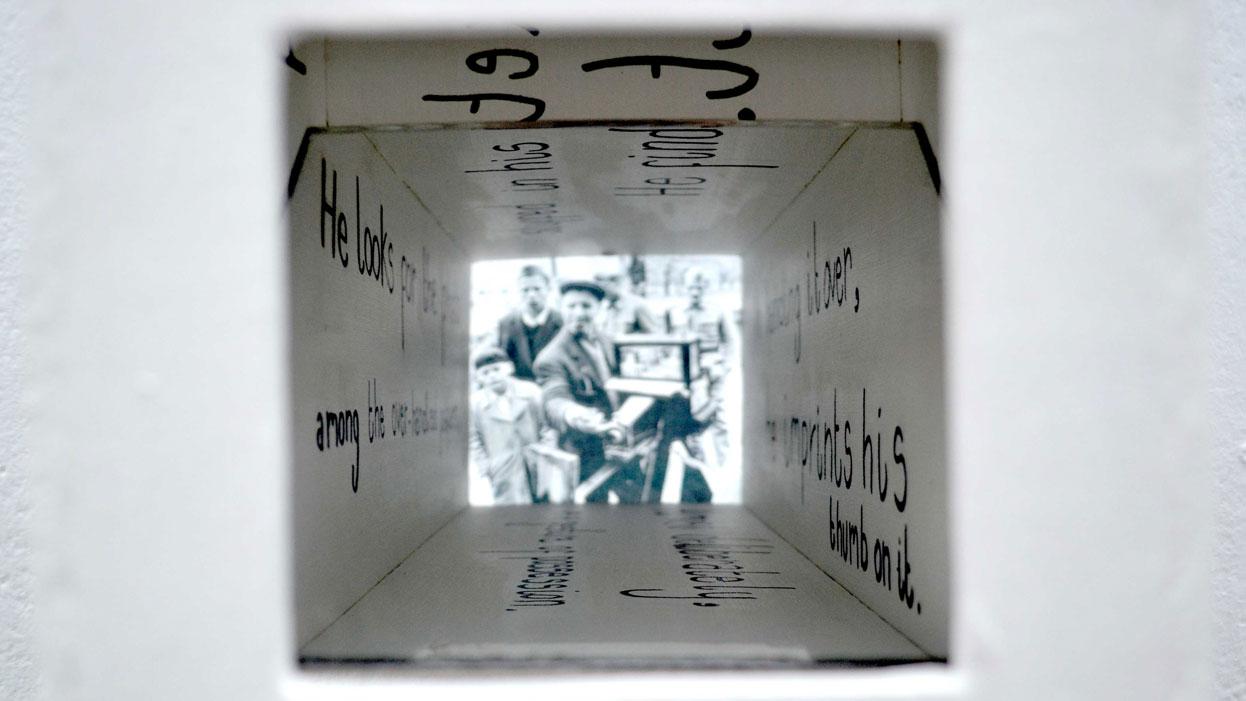 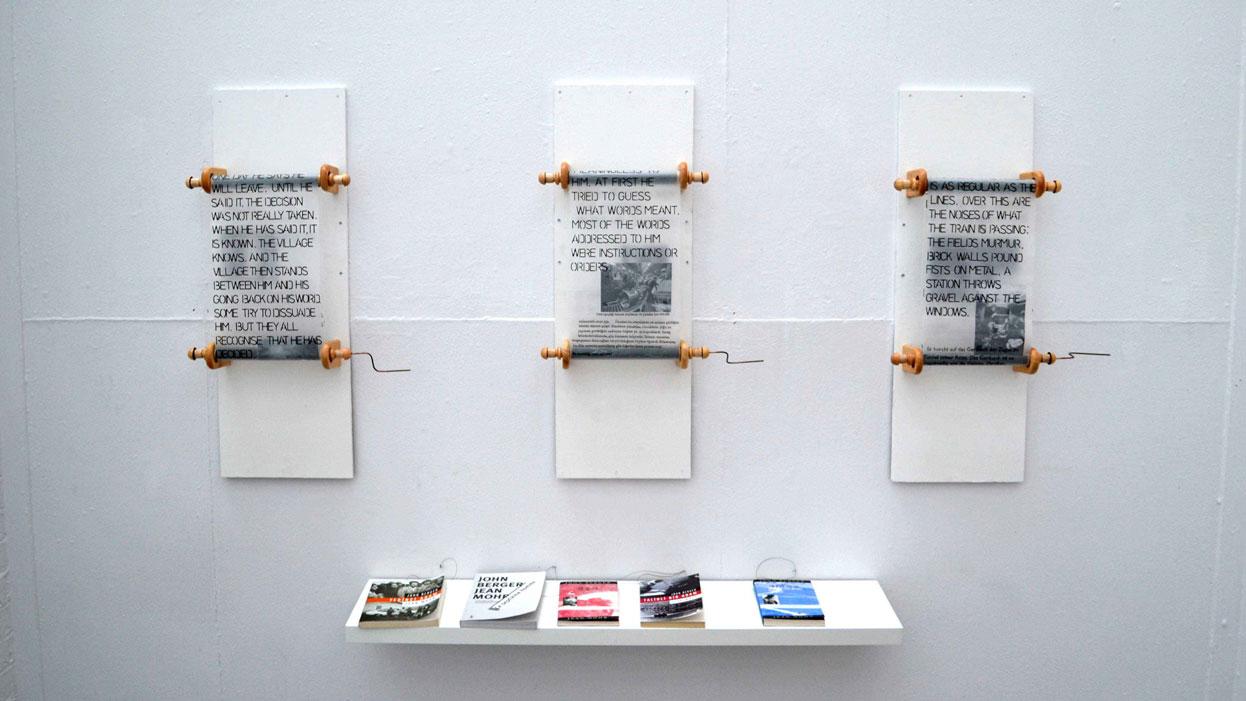 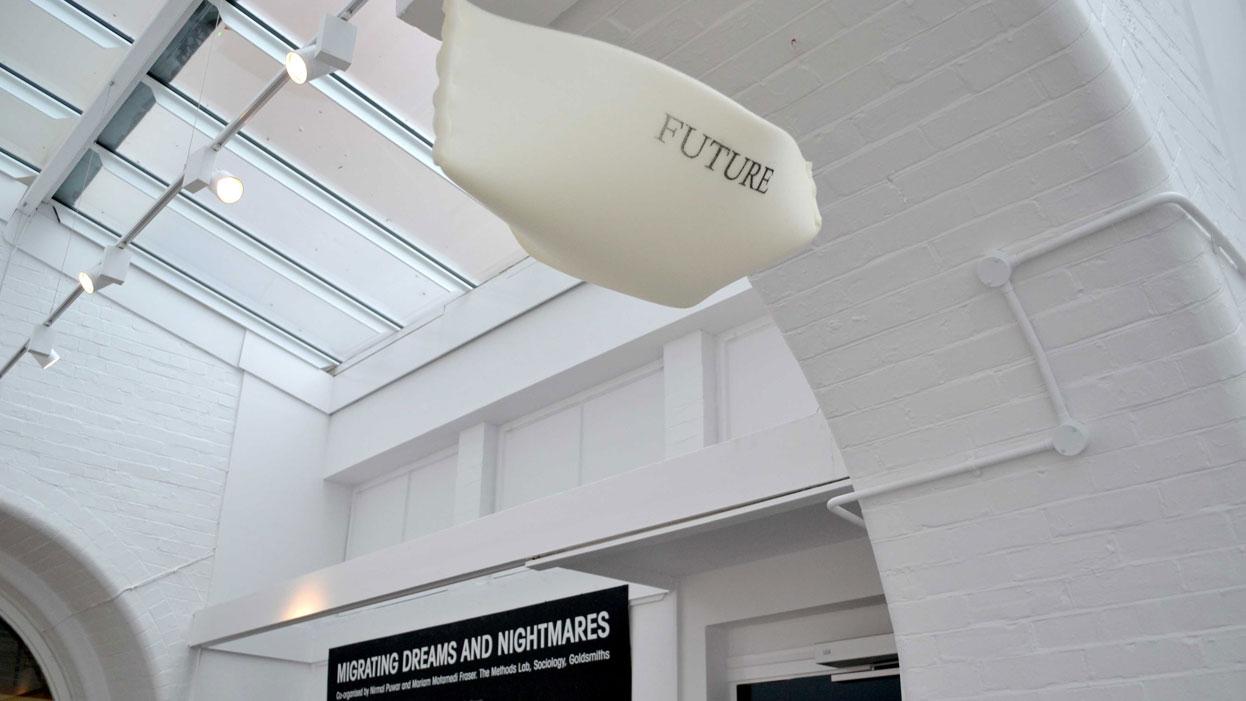 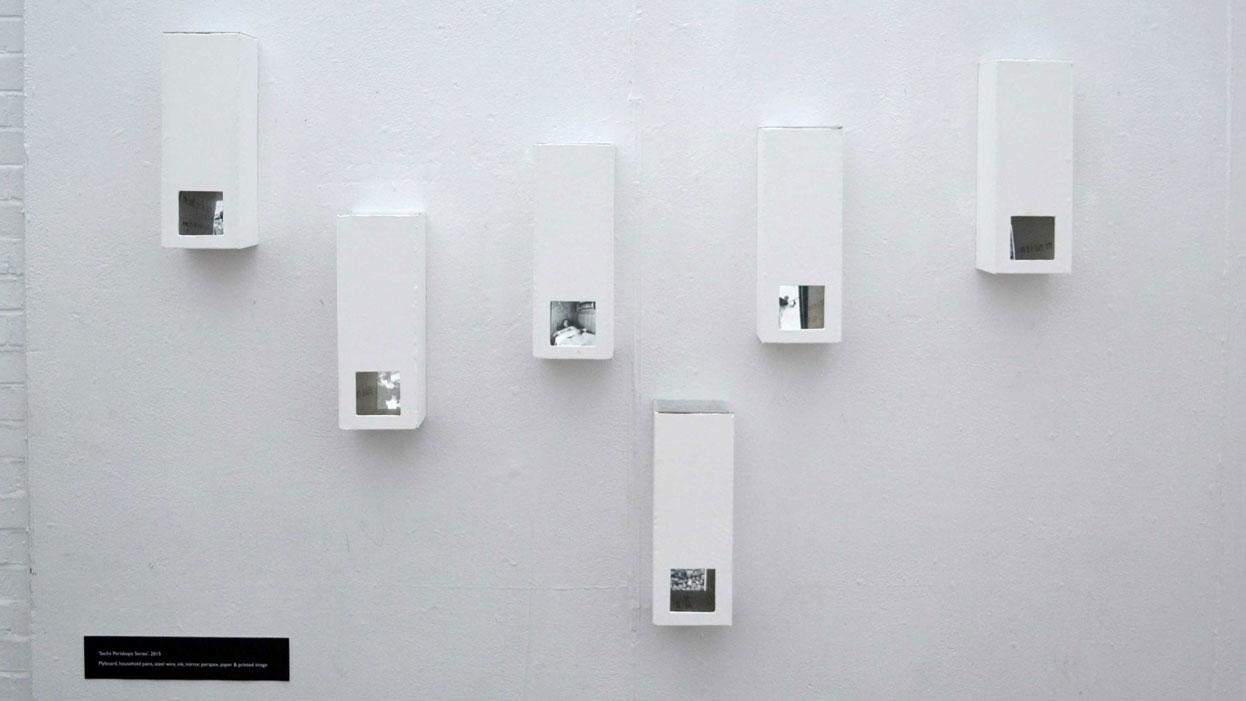 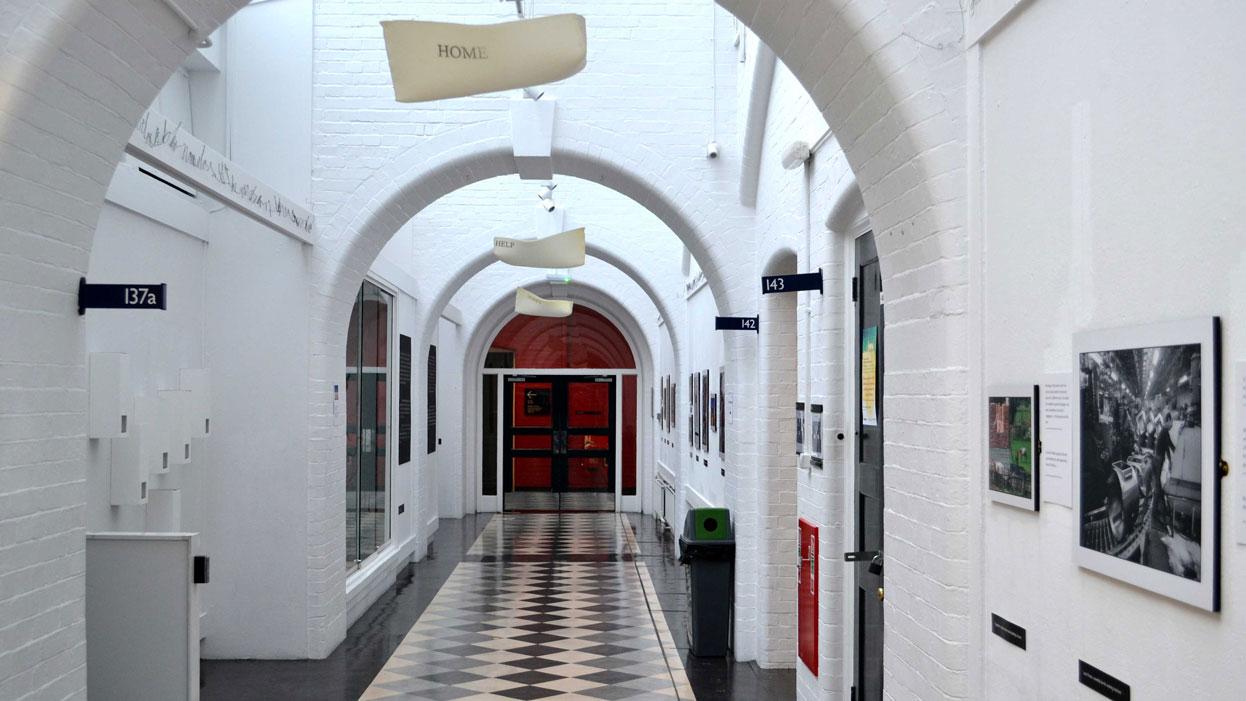 The exhibition is taking place in Goldsmiths’ Kingsway Corridor in the Richard Hoggart Building from November 2015 to April 2016 and is free and open to the public. Sixth form students from the local area will be given guided tours by Goldsmiths postgraduate students and a number of special events will bring together an international line-up of academics, journalists, artists and filmmakers.

Nirmal Puwar described the collaborative process that led to the exhibition as “a back and forth of conversations and materials between artists and sociologists to develop an exhibition that holds value for both, whilst at the same time managing to attract different audiences”. She goes on to say, “we are not working to the quick turnover found in galleries. Instead, we are allowing people to live and move through the exhibition across a number of months. At the same time we are trying to reclaim the walls of the university from the push to brand campus life.”

In a linked-in off-site exhibition at the Stuart Hall Library, artists Alia Syed (shortlisted for The Jarman Award) and Nadia Perrotta have responded to Berger and Mohr’s book to examine the hopes and fears driving the movements of current migrants and refugees. Syed's new film, On a Wing and a Prayer (2015), is inspired by the story of Abdul Rahman Haroun, who walked through the channel tunnel on 17th August 2015.

The exhibition and events series is the latest in a succession of collaborations between Goldsmiths’ Methods Lab and artists, pushing the boundaries of public sociology by placing sociologists at the heart of of curating. Puwar and Motamedi-Fraser are editing a special Issue of the journal Sociological Review on the subject of exhibition as method as a result of Migrating Dreams and Nightmares. Mariam’s work explores 'sense-making', how different kinds of theoretical, political and ethical sense is/can be made.