Written byDr Rosie Kennedy, Lecturer in the Department of History
Published on 9 Nov 2015

Every morning thousands of us entering the Richard Hoggart Building walk past a memorial to the former Goldsmiths students and staff who died during the First World War. Although we may not notice it, this memorial lists the names of 109 Goldsmiths men who died whilst serving in the Armed Forces between 1914-18.

Sadly we know very little about these men beyond their names, the dates they were at Goldsmiths, and, in most cases, the units they served with during the war. As part of the College’s commemoration of the Great War however, the Department of History has begun a project to find out more about these men, where they served and how they died.

Third year history students on Professor Richard Grayson’s special subject module “Life in the Trenches” have volunteered to conduct the project in what is already a very busy and important year for them. The students are using information from the Commonwealth War Graves Commission and other military databases to trace these men, and have, in most cases, already managed to establish the date of death for each man as well as the theatre of conflict they were serving in.

We now know for example that at least 52 Goldsmiths men were killed in action, the majority of them in France and Flanders. Other men, including Goldsmiths' first Warden Captain William Loring, served in the Dardanelles. Loring died of wounds he sustained during the Gallipoli campaign, while two other men 29 year old Private Arthur Barlow and 27 year old Private Ernest Miller were killed in action there on the same day, 21 August 1915.

Although they served in different regiments Barlow and Miller were both at Goldsmiths for a time in 1907 and so may have known each other. In the period immediately before the First World War the majority of students at Goldsmiths were training to be teachers. They undertook a two-year programme of studies, which was designed to fill in gaps in their own knowledge as well as to prepare them for the classroom. Although there was no Goldsmiths Pals battalion, 20 Goldsmiths men did serve in the same battalion, the 20th County of London.

Now that we have identified when each man commemorated on the memorial died the students are working to learn more about the action these men were involved in at the time of their death. To do this they are using battalion war diaries, military records that detail basic troop movements, military orders and intelligence summaries.  This work is just beginning but we have already uncovered some fascinating details.

Four of the men commemorated on the memorial, William Trueman, Alfred Townsend, James Nightingale and Thomas Dunningham were all at Goldsmiths together between 1911-1914. They went on to serve alongside each other in 20th battalion of the County of London Regiment. Dunningham, Nightingale and Townsend were all killed on the 25th September 1915, the first day of the Battle of Loos. Lance Corporal Trueman died four days later of wounds sustained in the same battle.

Our project to discover more about the men from Goldsmiths who died during the First World War is one of hundreds going on all around the country as communities reflect on the legacy of 1914-18. We have been delighted to make contact and share information with other groups including one school in Dorset where former Goldsmiths student Ralph Robinson worked in the year before he was killed in France in 1915. 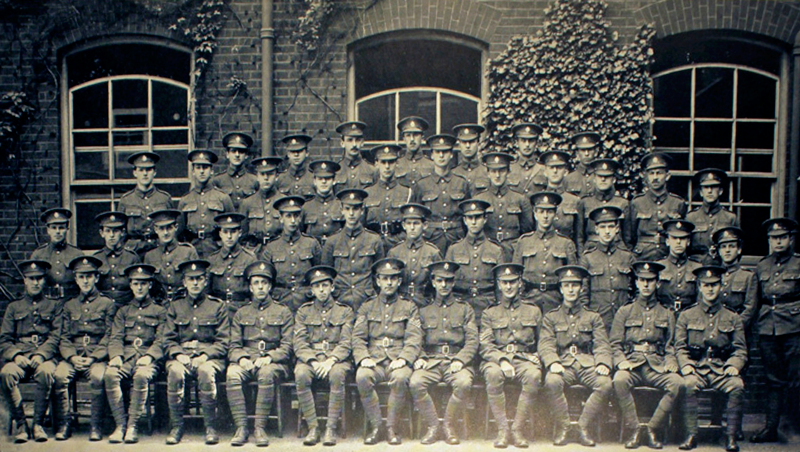 All of the information that we gather will be shared with the Lewisham Local History and Archives Centre where archivists have created an online Wiki of all of the borough’s war memorials. The hope is that eventually visitors to their website will be able to find information on all the war memorials in the borough, with descriptions, pictures, locations, inscriptions, biographies, news cuttings, and histories.

This is an ambitious project, run entirely by volunteers. As we approach Armistice Day, and beyond, Goldsmiths students are helping remember their predecessors who once walked the hallways of the institution.

Rosie is a modern British historian whose research focusses on the history of childhood.