Two editorial teams from the MA Journalism course came first and second in the BBC Worldwide Best Student Magazine of 2015 category at the Magazine Academy Awards.

Drawn from a shortlist of six titles, the students beat competition from across the country to claim the coveted one-two.

The students were judged on the quality of their finished publications as well as accompanying digital strategies and business plans.

The other titles shortlisted were Barbelles from Cardiff University and Amplify, Mama and Throwback – all of which were produced by students at the University of Sheffield.

Editor Hannah Boland told East London Lines: “At the end of the day we all supported each other and everybody in the group really deserved it. It was such a group effort. Everybody, even in the classroom was supporting.”

“I’m so happy for the team. All those late nights and all the times they may have hated me for shouting at them!”

"Winning the award also heightens the creative prospects for the university as well as individuals. It feels more like a win for Goldsmiths,” she said.

Shaken was aimed at 20-somethings seeking inspiration for a good night out. Editor Jazmin Kopotsha said: “It's so exciting to have our hard work recognised by such a reputable panel. I don’t think any of us could have given or done any more to our magazines, and it really paid off. We were all so overwhelmed at the awards, it was such a brilliant night. We couldn’t have asked for a better result and are so proud of what we achieved." 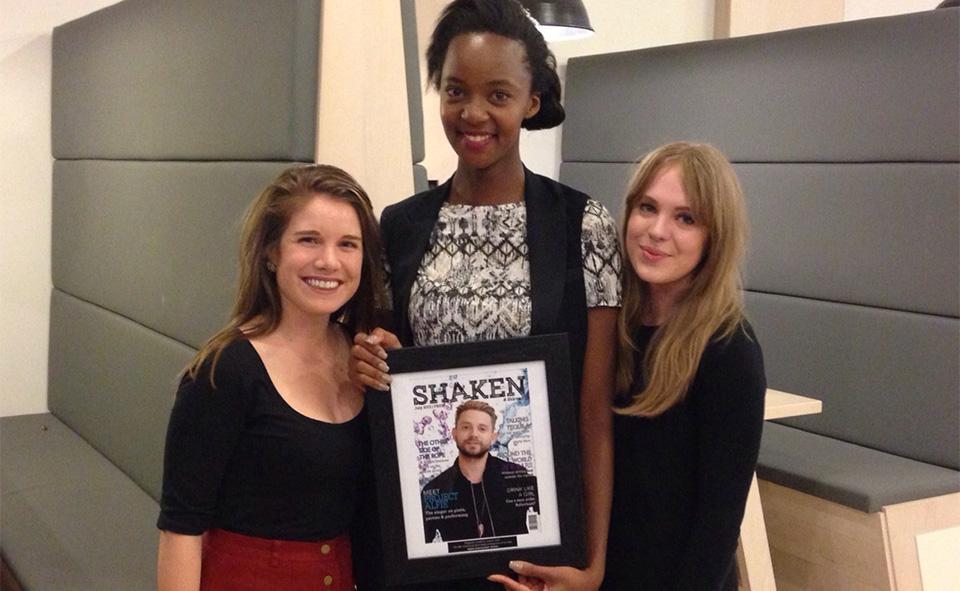 Becky Gardiner, Senior Lecturer in the Department for Media and Communications, said: “I am very proud of our MA Journalism students - to win not just one prize, but both prizes, is a really great achievement.

“They deserve it too - both groups worked hard, and their finished magazines were both lively and accomplished, with great digital strategies and a business plan that - as the judges acknowledged - was realistic.”

The judges hailed Scene as a “very slick magazine that understands its audience”.

They added: “The cover lines and headlines draw you in and there is an interesting use of images and graphics. The design is simple, but strong. A very professional product. An impressively-produced magazine, professionally and beautifully executed.”

Of highy commended Shaken they said: “A fun and immediately engaging magazine, with lots of editorial and commercial potential. Could easily become a genuinely useful tool for 20-somethings on the hunt for a better quality of nightlife.”

The award ceremony was held at Immediate Media Co in Hammersmith, London, on 15 October 2015.

The Magazine Academy was formed in 2014 to replace the former Periodicals Training Council Awards.

A collaboration between universities, it sees the best in magazine journalism educators coming together to celebrate the brightest new talent and showcase their work to the best of the industry.

The judges are drawn from across the publishing world and include Chris Kerwin, head of publishing at BBC Worldwide, Hannah Williams, editor of BBCGoodFood.com, Alex Bilmes, editor of Esquire and Lindsay Nicholson, editor of Good Housekeeping.