A new poem responding to the 1977 Battle of Lewisham has been installed alongside the mural commemorating the battle on Lewisham Way.

On 13 August 1977 an estimated 500 National Front marchers were met by 4,000 counter-protestors as they attempted to march from New Cross to Lewisham, south east London, resulting in violent clashes.

The Battle of Lewisham, as it became known, marked the first time a National Front march was prevented from reaching its destination, and also saw the first deployment of riot shields by police on the UK mainland.

Written by renowned poet Grace Nichols, the poem ‘Breath’ reflects on these historical events through the lens of the Covid-19 pandemic and recent Black Lives Matter protests around the world. It was commissioned by Dr Deirdre Osborne, Co-convenor of the MA Black British Writing at Goldsmiths. 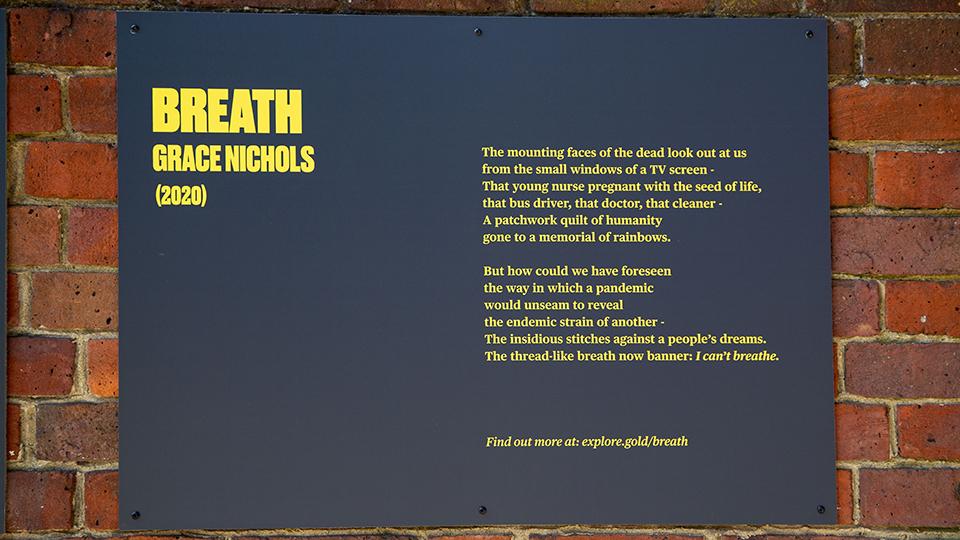 Grace Nichols said: “While activists can articulate a political situation and maybe bring about change, a poet might get closer to the emotional truth of it through a poem.

“The poem surprised me because I didn’t set out to write directly about the Battle of Lewisham or about the terrible incident with George Floyd, but both events are subliminally linked by the thread of racism, and the poem came together in that way.”

Dr Deirdre Osborne said: “The echoes from history reverberate strongly in the clarion call to action through remembrance and recognition of those Black citizens past and present, to whom the modern British nation continues to owe such a remarkable debt.”

The mounting faces of the dead look out at us

from the small windows of a TV screen -

That young nurse pregnant with the seed of life,

that bus driver, that doctor, that cleaner -

A patchwork quilt of humanity

gone to a memorial of rainbows.

But how could we have foreseen

the way in which a pandemic

the endemic strain of another -

The insidious stitches against a people’s dreams.

Find out more about the story behind 'Breath'.

The mural was created in 2019 through a collaboration between local community groups and graphic designer Ted Low, a Goldsmiths graduate, and is formed from a collage of images by five photographers who captured the events of 13 August 1977. In 2017 a Lewisham Council maroon plaque was installed on nearby New Cross Road as part of events to mark the 40th anniversary of the Battle of Lewisham.