Petrochemical companies have built chemical plants on the lost graves of enslaved people in Louisiana, USA, creating a toxic swathe of air pollution across the region known to local people as ‘Death Alley’, new research shows.

Forensic Architecture, a research agency based at Goldsmiths, University of London, has worked with partners in the US and UK to develop new techniques to both track the spread of air pollution across ‘Death Alley’ and map the likely locations of large 18th and 19th Century burial sites along the Mississippi River.

In locating and trying to protect these burial sites, it is hoped that the decimation of land and air by the petrochemical industry can be slowed or halted, protecting the lives of current and future residents – including majority Black communities with ancestral ties to those who lived enslaved, died, and were buried there.

A stretch of the Mississippi River between Baton Rouge and New Orleans, which was once called 'Plantation Country' is now the 'Petrochemical Corridor'. For those who breathe its toxic air, it is known as 'Death Alley'.

When slavery was abolished in 1865, hundreds of sugarcane plantations lined both sides of the lower Mississippi River; today, more than 200 of these sites are occupied by some of the most polluting petrochemical facilities in the US. 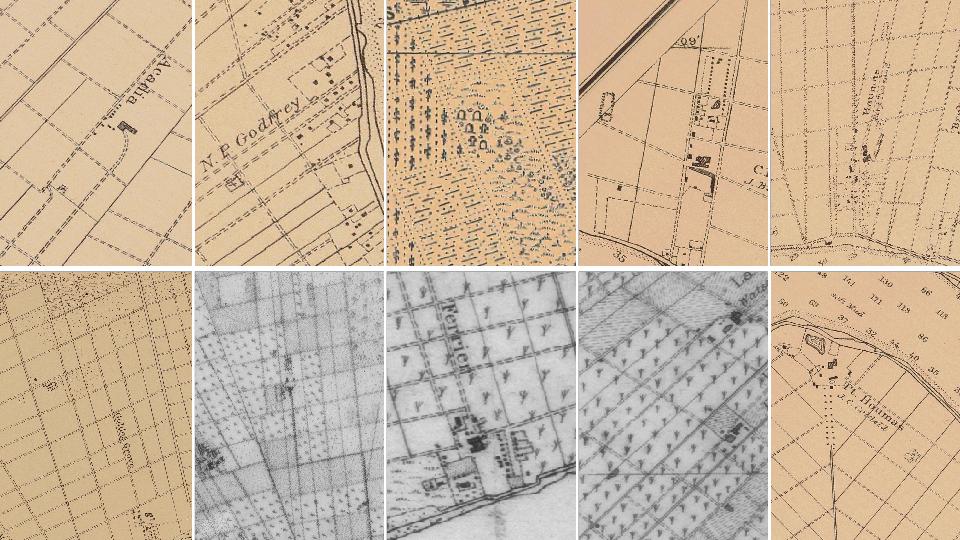 [Inconsistent cemetery marking samples - While a few cemeteries are mapped, the majority are omitted and the symbology of mapped cemeteries is inconsistent. Multiple verification practices are required to get closer to confirming the locations of cemeteries]

Most of the burial grounds for people who worked on the plantations were omitted from historical maps and, over decades, all outward traces of many have been erased. When petrochemical corporations break ground on new construction sites some cemeteries have resurfaced. FA studied over 50 archaeological field reports commissioned by industry across the region, identifying a systemic disregard for the cemeteries of enslaved people.

Residents of the majority Black communities that border these plants breathe some of the most toxic air in the country, and suffer some of the highest rates of cancer and COVID-19 mortality, along with other serious health ailments.

FA has used advanced techniques in cartography and fluid dynamics (simulating the flow of gases and liquids) to help support ongoing and future action by local community activists against further industrial expansion, as the presence of a cemetery can put a stop to proposed development.

FA’s investigation uses fluid dynamics simulations (provided by collaborators at Imperial College London) to evidence the spread of toxic air pollutants across Death Alley. The simulation tracks the spread of a range of airborne pollutants from three dozen facilities along the Mississippi River under simulated meteorological conditions, drawing on ten years of data from a local weather station.

FA’s research also proposes a new methodology for estimating the probable locations of cemeteries. Drawing on maps and aerial imagery, historical photographs, property surveys, transcripts of interviews with formerly enslaved persons, and other primary and secondary source information about specific plantations FA’s analysis of the spatial and economic logics of the plantations, rates of forest clearance, and other historical factors have created ‘fields of probability’, visual indicators of the more likely locations of mass burials.

Imani Jacqueline Brown, Forensic Architecture researcher and project coordinator, who grew up in Louisiana, said: “This investigation exposes how the petrochemical industry continues a racialized spatial and environmental logic first established by colonialism and slavery, supports the multigenerational work of Black Louisianans to recover our history and protect our future from systemic erasure. If environmental racism is a monument to slavery, ecological reparations are the only thing that can take it down.”

FA have worked with RISE St. James, a faith-based grassroots organisation formed to advocate for racial and environmental justice in St James, Louisiana. The group came together in 2018 after Formosa Plastics announced the construction of a new 3.5 square mile facility in the region.

Sharon Lavigne, Founder and director of RISE St. James said: “We used to be able to live off our land—not anymore. Our enslaved ancestors lived, worked, and were buried on these grounds.

"Now, our so-called representatives want to allow petrochemical companies like Formosa to disturb their only resting places to build more plants that are killing our community. We continue the struggle of our ancestors. Our ancestors want us to live. We want to live.”

The majority Black descendent community in Louisiana has long-voiced demands for accountability from the petrochemical corporations that occupy the land. FA’s research can now help support local claims for accountability and reparations. The research will be open-sourced and made available to the public. 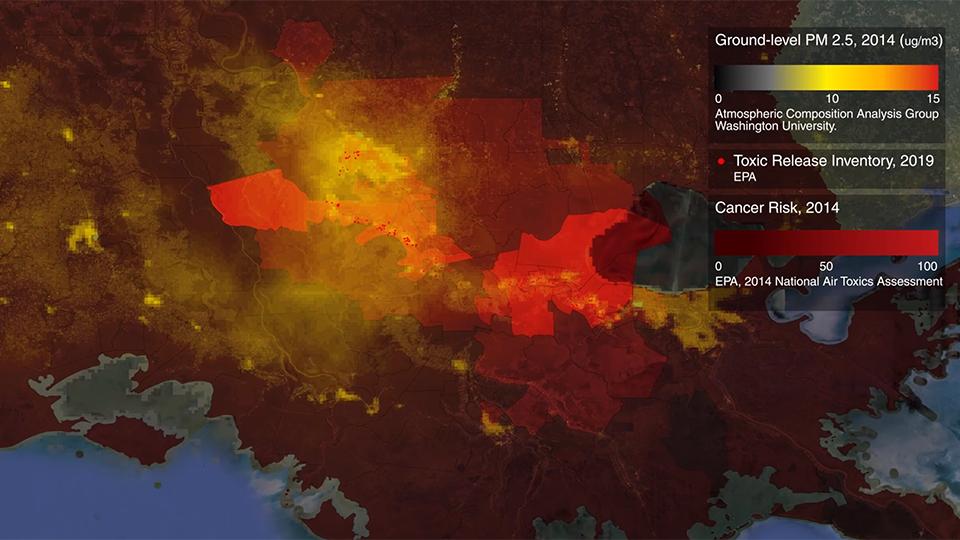 [Sites of PM2.5-producing facilities are layered onto a ‘heat map’ showing concentrations of PM2.5 (particulate matter) in the atmosphere, according to a 2020 survey by the EPA]

FA’s research has been published today (Thursday 1 July 2021) online, and will be presented at the Whitworth Gallery, Manchester, England, as part of the Manchester International Festival. The exhibition Cloud Studies (2 July – 17 October) draws together some of FA’s previous and ongoing investigations to explore how states and corporations weaponise air to suppress civilian protest, maintain and defend violent border regimes, and empower extractive industry. It includes investigations from Palestine, Lebanon, UK, Indonesia, and the US-Mexico border.

Visit the Forensic Architecture website for more information, video and other materials related to the project ‘Environmental Racism in Death Alley, Louisiana’ and other FA research projects: www.forensic-architecture.org