The founder of an award-winning access-to-education programme based at Goldsmiths, University of London has been appointed OBE for his services to higher education.

Joe Baden, a Goldsmiths History graduate and founder of Open Book, was named Officer of the Most Excellent Order of the British Empire (OBE) in the Queen’s New Year Honours 2017.

Established in 2003 to support those at the margins of society in transforming their lives through education, Open Book has gone on to provide courses, drop-in classes, and a new social community for hundreds of students of all ages and backgrounds who may never have previously considered any sort of further or higher learning.

Having grown up dabbling in a life of crime and left school at 13 with no qualifications, Joe Baden found himself looking at a prison sentence. Disillusioned by offers of manual labour courses, but realising he had to do something, he became determined to go to university.

After graduating from Goldsmiths in 1998 with a BA in History, Joe became a tutor with the probation service, where he became acutely aware of the scepticism towards education and feelings of alienation held by many people with similar backgrounds to his own.

He set out to build a team of like-minded individuals who could provide help and support for those who for institutional, structural or cultural reasons have not been provided with equal access to education.

With an ethos of education for education’s sake, students – many of whom continue at university to complete undergraduate and postgraduate degrees – are encouraged to combine their own life experience with what they learn in the classroom, transforming negative backgrounds into valuable insight and inspiration for positive change.

Open Book has gone on to open satellite projects in other universities, and has won or been shortlisted for multiple university sector awards for widening participation.

Joe’s dedication to the project has been recognised by Southbank University with an Honorary Degree, and he received the William Ross Murray Award from the University of London in 2012 – an award previously won by Tony Benn, among others. 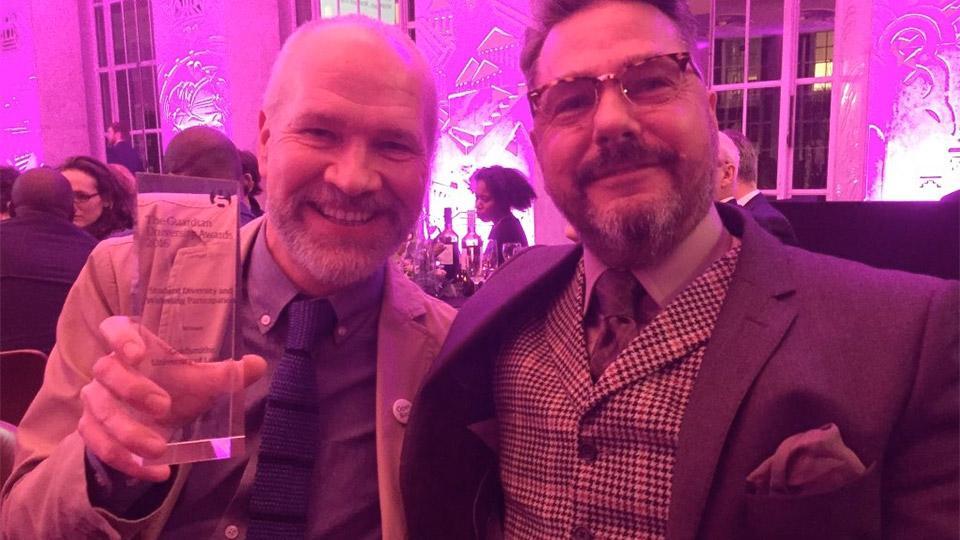 Joe’s colleague Neil Bradley, Open Book tutor, says: "Very much like the majority of Open Book students, Joe has always been reluctant to take praise for his tireless work in making Goldsmiths Open Book Project what it is today. And yet, he so very much deserves his moment in the spotlight for single handedly changing the lives of hundreds of people, including mine, and those of my colleagues.

This honour is so well deserved, and a fitting tribute to a man whose single aim was to make the lives of the people he encountered better. Over the years he’s provided love, friendship, support, and enthusiasm, believing that all of us, regardless our background or social status, should let the power of education turn us all into the people we were always meant to be.

“I know of no one working in higher education today more deserving of this honour than Joe Baden, a true working class hero."

Sarah Lambert, Open Book Academic Skills Manager, says: “Joe has built something unique. A team that works together and supports one another to do what we each want; an ethos of respect and responsibility; a way for us to make a real difference to the institutions of higher education, and a community of students who constantly give back to the project as much as they get from it.”

Open Book is a project that has not only drastically turned around the lives of participants and, by extension, their families, but caught the imagination of others.

Writing in the Evening Standard on his experiences meeting several Open Book students, author Will Self noted that “the man who told me he was boning up on Medieval Latin so he could do a doctoral thesis on St Augustine had been a drug addict for 30 years, in and out of jail.

“I also spoke to a former armed robber who’s doing a sociology degree and a playwright on day release from HMP Ford whose work has been commended by the Royal Court… I wish that the people who are so blinkered about the possibility of rehabilitating offenders could see the work organisations such as Open Book do.”

Patrick Loughrey, Warden of Goldsmiths, adds: “We’re immensely proud of Joe and everything he’s achieved through both the transformation of his own path, and in changing the lives of hundreds of people through Open Book.

“Joe’s devotion to this project over a decade and a half, and his wholehearted belief in the value of education as an absolutely critical force for good is evident in everything he says and does.

“Open Book had modest beginnings but has grown, and continues to grow. Here’s to a truly inspirational man, so very deserving of this recognition.”