An exhibition at Goldsmiths, University of London will celebrate the life and work of a former student and promising artist murdered in July 1982 at the age of 27.

Urge to Paint opens on 19 January at Goldsmiths, New Cross, south east London, as the first public exhibition of work by Keith Church.

Born into a working class family in 1955, at the age of 12 a painting by Keith of his mother attracted the attention of renowned art educator and writer Harman Sumray (1920-2006). It was at this point that Keith decided he wanted to be an artist.

He took a Foundation Art qualification at Goldsmiths from 1975-76, and over the next six years lived in a commune, experimenting furiously with styles and themes.

Keith feared that the influence of art school would stifle his artistic licence. His urge to paint using his own motivation made him resist going back to art school immediately. He eventually relented and planned to return to Goldsmiths as an undergraduate in 1982.

Before he could mature as an artist, Keith Church was killed in the Hertfordshire town of Broxbourne. It remains one of the few unsolved murders in Britain. 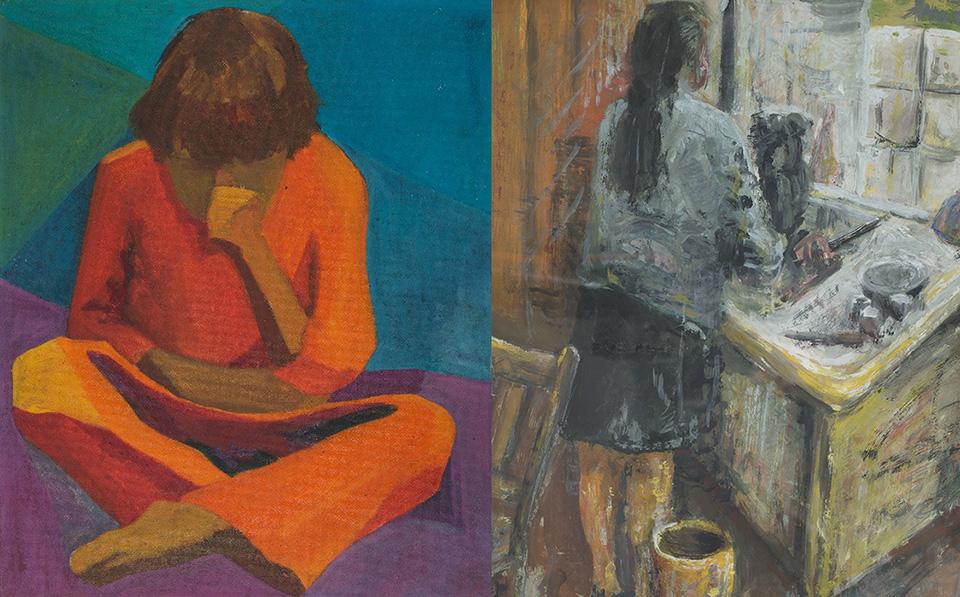 Keith’s mother Pat Church has kept all 2,000 of his artworks on display, or in storage, in her house since her son’s death.

She writes: “Keith had high morals, he cared about the world we live in, he cared about people especially the underdog. He was not an angry person, but he did not fit in, he was just too shy."

His cousin Kurt Barling, curator of the exhibition, is a professor of journalism at Middlesex University. He is currently fundraising for the preservation of the collection of paintings. It was Keith’s death which part-inspired Kurt’s entry into a career in the late 1980s as an investigative reporter for the BBC.

Commenting on Keith’s body of work, Professor Barling says: “The range of styles is extraordinarily varied and the work, although without a specific signature, reflects an emerging talent.

“He focussed on painting the familiar, such as his family and surroundings, with strong contours and bright clear colours. Influences can be seen from Gustav Klimt, Paul Cezanne, Joan Miro, Paul Klee, Friedrich Hudertwasser and even Hieronymus Bosch.

“One can see Pablo Picasso-guitars warped like Salvador Dali’s soft watches or a David’s star and cat that have echos of Marc Chagall’s dreamlike imagery. His use of bright colours in fantastical scenes reminiscent of Max Ernst.

Keith's is a familiar story of how an artist struggles to fashion a personal vision in a demanding world. His vision was ultimately incomplete and this exhibition is a reminder of the artistic aspiration of finding a unique way of representing the world.

“This will be the first time Keith's creative energy, industry, talent, dreams and nightmares will be explored by a wider audience. The liking of art is in the eyes of the viewer but he left enough to make us wonder what he might have become.

“We believe the exhibition will help students of art to recognise the powerful legacy they are constructing if they commit to being an artist. We also believe that Keith’s experimentation with many different styles will inspire other young people to see that art requires spontaneity, experimentation and craft.”

In 1976, Keith wrote: "Art is the result of an urge. Controlled and applied by the will of the artist. Though the urge often comes out far stronger than the control."

Urge to Paint – which marks the 40th anniversary of Keith’s graduation from the Art Foundation programme at Goldsmiths - forms part of the Goldsmiths cultural event Aspiration and Representation: Looking Back to Travel Forwards, organised by Dr Deirdre Osborne and Professor Kurt Barling.

Entry to the exhibition is free. Opening on 19 January it runs for three weeks on the ground floor of the Professor Stuart Hall Building.

Visit crowdfunder.co.uk to donate toward the exhibition and future preservation of Keith’s work