You probably live in Horsham - a downloadable plugin that mines your browser for data, then builds a profile of your personality and lifestyle - has been created by a Goldsmiths, University of London student.

Joe McAlister’s project asks: If the government’s ‘Snooper’s Charter’ legitimises mass surveillance, can we use the same technology to study ourselves?

An art piece with a strong political theme, Joe has combined a visual spy-like aesthetic with the programme’s ability to generate eye-opening reports on the user’s mind-set, creating a feeling of shock, awe, and a slight sense of unease.

Designed to promote discussion around the paper trail we leave on the internet, and how safe that data is online, You probably live in Horsham also asks the user to compare their online identity with how they see themselves in real life.

“In our materialistic society many people’s lives have become intertwined with the internet to such a degree it’s become hard to imagine the boundaries between virtual and real,” says Joe – a first-year Department of Computing undergraduate who’s set to graduate in 2018.

“I want to prompt people to look at their lives from a new perspective. When important elements of your identity appear in a list in front of you, it becomes de-humanising. You become just another person on a piece of paper, or in this case, a computer screen.

“I want people to see it, step back a second, and consider a completely different side to their identity which they might not have previously seen.”

“The Home Secretary’s Investigatory Powers Bill demands web and phone companies log the IP addresses, URLS and connection times for every citizen for a year. Theresa May has emphasised how ‘terrorists’ are using the internet to evade detection and by using blanket surveillance they can help prevent this.

“But at what point does this ‘harmless’ state surveillance become the precursor to something resembling a totalitarian state?” 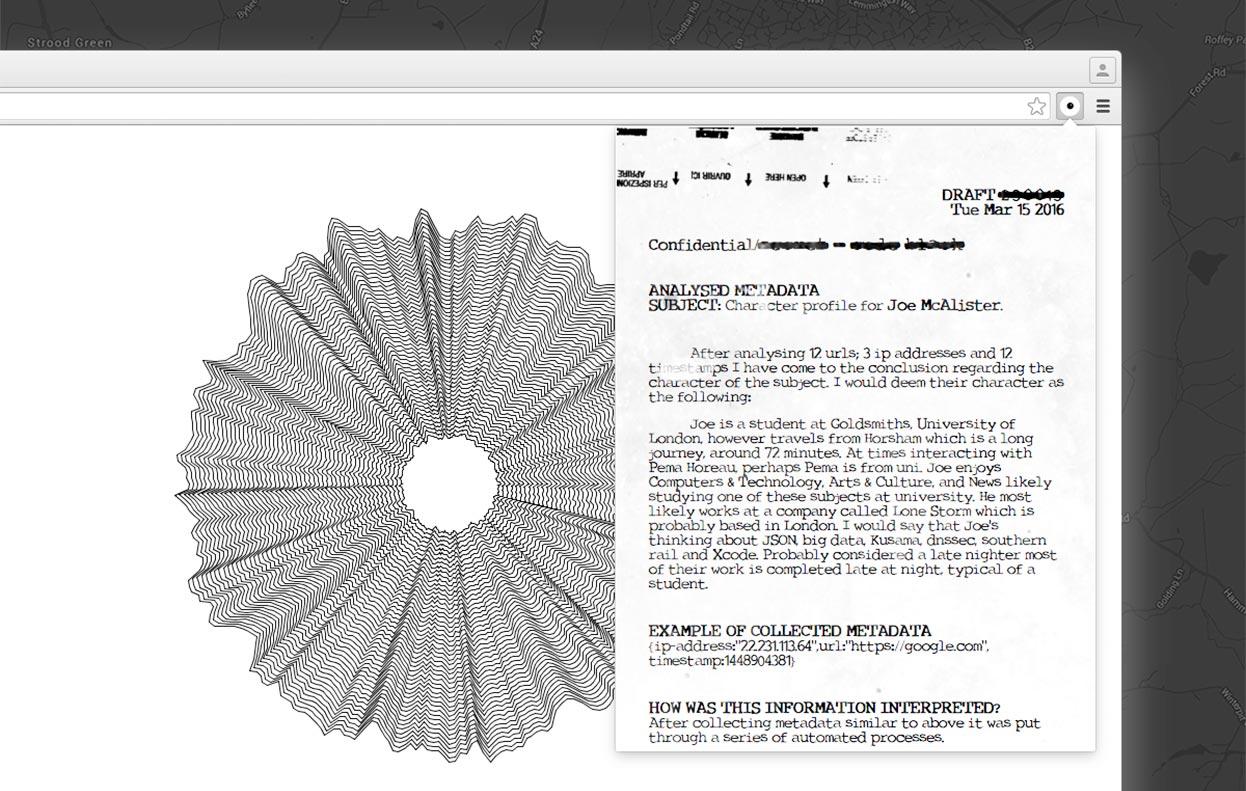 Behind the scenes of You probably live in Horsham it’s a complex system: After the user installs a plugin, it injects a Javascript file into every website that’s visited. This script will then use JQuery, Javascript and Ajax to collect the IP address, URL and timestamp of every web address.

The data is then formatted into a storable format, and individual parts of it analysed. Given the project’s purpose in raising awareness of data security, all data is stored locally in the user’s browser, with only small elements sent temporarily via encrypted ‘https’ to remote servers run and secured by reputable companies.

After running the program for a short time on his own computer, Joe’s report proved remarkably accurate, guessing among other facts that he went to Goldsmiths, travelled from Horsham in around 72 minutes, worked a lot late at night and was probably thinking mostly about “Southern Rail or big data”.

The gathering of data then allows further assumptions to be made manually, even by people who don’t know you.

For example, the programme shows that Joe owns a Mac and travels a lot so it’s likely a lightweight version like a MacBook; he likes the artist Yayoi Kusama so it’s likely he also likes other installation art; he’s a computer programmer, appreciates art and goes to Goldsmiths, so he’s likely to be studying Digital Arts Computing.

“The personas we display to people across our idealistic online lives and our more realistic lives can be very different,” adds Joe. “This programme might generate a report for you that reflects your online escapism, or you’ll find more of your real personality comes out.

“From just a few dozen URLS, You probably live in Horsham can generate huge amounts of data, and the longer you use the plug-in, the more accurate that data will be,” adds Joe.

“And unlike your inclusion in the government’s data retention scheme, it’s entirely optional and easy to stop.”

Visit ‘the org – a collection of net art from Goldsmiths students’ and follow the instructions to install You probably live in Horsham.

Find out more about BSc Digital Arts Computing at Goldsmiths.