A top communications industry prize has been awarded to an immersive murder mystery event hosted by Goldsmiths, University of London to raise the profile of the university’s newly-launched Forensic Psychology Unit (FPU).

On Wednesday 23 November, the FPU and Goldsmiths’ Communications Team were awarded the Corp Comms magazine Best Communications By A Public Sector Organisation award for The Death of Jane Doe: The Psychology of a Murder Investigation.

The January 2016 event was created to showcase Goldsmiths research and expertise in forensic psychology, and to gather data from audience members for use in further research by the FPU’s academics.

The event capitalised on an increased public interest in forensic psychology, prompted in part by the rise of Nordic crime dramas, as well as documentaries such as Making A Murderer on Netflix.

It was also a response to the growing view that academic research should be made more accessible, to help the general public understand how research impacts upon many areas of their lives, including the criminal justice system. 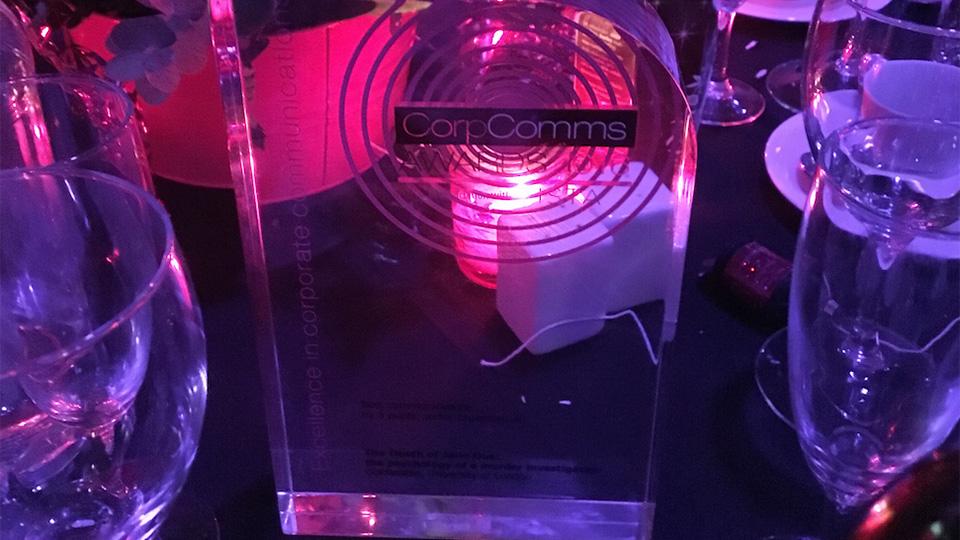 Working closely with actors, former police officers and a special effects expert, the FPU also drew on details from real crimes documented by The Innocence Project, which has helped exonerate more than 300 US prisoners from wrongful convictions, using DNA evidence.

Real-life former senior police detectives were joined by actors from Goldsmiths’ student Acting and Filmmaking Society (led by Benedikt Laumann) playing the victim’s family, as they put on an emotional appeal for information. Suspects were introduced throughout the evening and mingled with the audience, who were asked at various intervals to identify the perpetrator.

The event not only helped draw attention to the Forensic Psychology Unit, which launched in 2015, but helped foster relations with future students and journalists at publications such as the New Scientist and The Psychologist.

The night was promoted and captured through creative social media and digital activity, including a short documentary film by Ashley Simpson and Liron Zisser from the Communications Team.

Future events are planned, with the aim of raising awareness about the role psychological science can play in making criminal investigations fair and effective. In doing so, it is hoped that A-Level students are encouraged to consider a future in the forensic psychology field.

Goldsmiths’ Public Engagement Manager Will Cenci says: “This award is really a testament to the power of collaboration and what can be achieved when a dedicated group of people get together and decide to do something new and ambitious. Congratulations to the Forensic Psychology Unit and everyone involved.”

Find out more about the Forensic Psychology Unit at Goldsmiths

Fiona is an expert in applied cognitive psychology, studying the reliability of human memory via understanding its strengths and weaknesses.