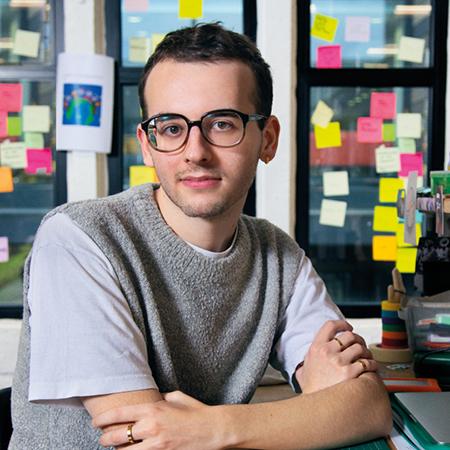 It’s great to be surrounded by peers who are doing completely different work.

Getting inspired and being brave

“I love that the degree is so broad. I’ve made stickers, films, a mixtape, sculptures, zines… the list is endless. I don’t think I’d have been brave enough to do that anywhere else. BA Design is all about the idea – how you respond to that is open. The tutors and technicians are very used to weird and unique requests and it’s great to be surrounded by peers who are doing completely different work.”

Jack moved to Goldsmiths from Nottingham, and once in London noticed the city’s iconic blue plaques, which can be seen on the side of buildings where notable people have lived or worked. But after analysing nearly 1,000 of the plaques, Jack realised that 88% of them commemorated men, and just 4% featured Black and Asian people. “I’d also never recognised anybody on them,” Jack explains. “The current criteria is that the people honoured have to have been dead for at least 20 years. So I wanted to create something that was more relevant to our generation and recognise living rappers, activists and comedians, to reflect the London I moved to when starting at Goldsmiths.”

This spurred on Jack’s university project, True Plaques – stickers that mimic the look of the original English Heritage plaques, but celebrate modern London icons including Michaela Coel, Riz Ahmed and Kathy Burke. “I wanted the project to question who we choose to celebrate and why we wait so long to do so,” says Jack. “Using these stickers is a great way of confronting the existing limited cast of English Heritage plaques.”

The stickers were put up in significant locations around the city, and ‘True Plaques’ was quickly picked up by Vice, who wrote a feature about Jack’s project. “There are a lot of ‘unofficial’, reimagined plaques from other people, but I think I was maybe the first to concentrate on recent events and people that we resonate with right now,” Jack says.